At first, I was sure that these two mourning doves were fighting... they were pecking each other about the face, and puffing up their feathers. However, it soon became apparent that I was thinking about 180 degrees in the wrong direction! Afterwards, the male sat around puffing out his feathers for a minute or two, and then began to groom the female around her neck. 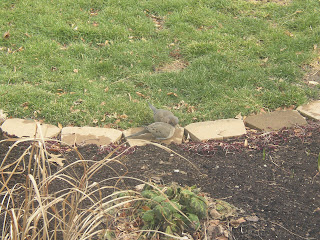 Spring must be closer than I had thought. :) I took a few pictures of the grooming, and wished them good luck before I closed the curtain. (Mourning doves are terrible nest-builders...)

In the Spring a fuller crimson comes upon the robin’s breast;
In the Spring the wanton lapwing gets himself another crest;

It is that time of year. The American Robins should be begining their first nests (usually in evergreens this time of year) soon too.

A very pleasant post to put spring thoughts in our heads. Thank you.

Love the Tennyson... and that's quite a piece for our doves. : )

As the husband is, the wife is: thou art mated with a clown,
And the grossness of his nature will have weight to drag thee down.

He will hold thee, when his passion shall have spent its novel force,
Something better than his dog, a little dearer than his horse.

What is this? his eyes are heavy; think not they are glazed with wine.
Go to him, it is thy duty, kiss him, take his hand in thine.

It may be my lord is weary, that his brain is overwrought:
Soothe him with thy finer fancies, touch him with thy lighter thought.

Talking about the birds...this morning I got up at 5.30 to record the Dawn Chorus here in Scotland! It was 0 degrees at that time too! I am hoping to learn from one of my sons how to add it to my blog, which is about the story of how we made a garden for wildlife starting 16 years ago. I'm doing it for my family and any future grandchildren. Thank you for your very kind comments. I shall add your blog to mine and start reding it from now on.

Your spring pictures were beautiful ... I am envious!! I loved the mourning doves in action ... great shot.

I was interested to read that your dog eats tomatoes. Mine licks any salad dressing off the tomatoes and carefully drops them on the floor ... he does this with most veggies! Chocolate is a whole different story though...

I'm adding your blog to my 'playing in the dirt' links ... I will come back and enjoy your picturs often!

I've noticed the doves here, too! I haven't caught them getting friendly, though, but several mornings ago, I heard them outside cooing. It was the first I'd heard them this spring.

Isn't it fun, watching the world wake up after a long winter's sleep?

You watch...the bees will be at it next!!

I'm still waiting for my yard to be graced by mourning doves again! Last year, I had three pairs who pretty much stuck around all day.

I love that Tennyson quote!

Doves can be so randy. Violent too. I see them often attacking each other at the bird feeders. Makes you wonder why they were used as a symbol for peace? Your writing about doves and Tennyson poem reminds me of my favorite poem by Montale. Simple and profound.

I see a bird

I see a bird motionless on the eaves,
it could be a pigeon but is thinner
and has a little tuft; or perhaps
it's the wind, who knows, the windows
are shut. If you also see it, when awakened
by the outboard motors, this is all
one can know by way of happiness.
It's too expensive. It's not for us,
and he who has it doesn't know
what to do with it.

Birds are such wonderful creatures, well dogs are too. Just watching the birds fly and eat makes me wish I could live so carefree.

You are a nature lover.I love trying to photograph wildlife, or insects with my camera.Those doves look very cute.They provoke an emotional response in us.
Nice poem too by Tennyson.how is Coco?

I don't think we have that type of bird in Australia but the best thing I have seen a bird do is eat a snake.

Our Kookaburra is amazing. It will grap it round the neck kill the snake and then start swollowing it for about an hour. They also make a fantastic laughing noise in the gum trees.

What a nice post. I love that poem, and agree with you about the dove's nest building ability.