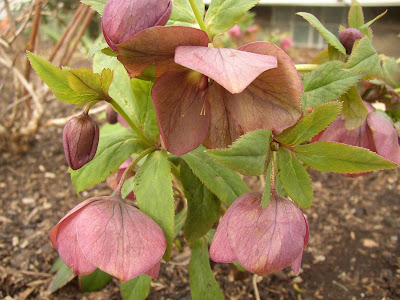 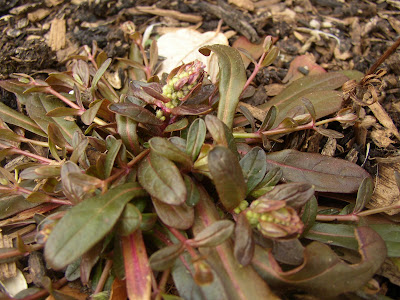 In Bud:
'Chocolate Chip' ajuga
'Vodka' begonias (indoors)
'Bing,' 'Northstar' and 'Montmorency' cherries
'Bartlett' pear
'Sundance' and 'Honeycrisp' apples
fritillaria
all of my other tulips
In March, I kept thinking, "Just wait until April--I'll have so much blooming in April!" And now I'm saying that again, only about May. If you aren't already known for your patience, Ma Nature sure does force you to knuckle under and develop it fast.
Posted by Unknown at 7:44 PM

Even though you are a zone warmer than me (6, right?), my garden seems to have been farther along when the weather changed. I'll be posting my list soon! Thanks for participating in Garden Bloggers' Bloom Day, where our motto is "wait until next month!"

Carol, that's not actually very unusual. Zone 6 plants overwinter just fine here, but my spring is always late in coming because of the moderating effects of Lake Erie.

I drive 30 minutes south every day for work, and they seem to be almost 2 weeks ahead of me in the spring based on daffodil and tulip blooming times. On the other hand, I sometimes am still harvesting tomatoes around Halloween so I can't complain too much. :)

I forgot to say... I will edit my post with a link to Carol's official April Garden Bloggers' Bloom Day post once she puts it online.

Never having been a patient person I have had the same thought about gardening and being forced to learn patience. After over thirty years of gardening I have begun to develop at least a little...! I love your helleborus!

Ah, helleborus. My oldest plantings are beginning to wane after 15 years. I have plenty of off-sets of various sizes all over the place and I'm wondering if I should divide and reset or replace? I'd appreciate any suggestions.

Ah, bs_g, I can relate! Just 30 minutes south of me, things will be a week or two ahead...Richmond is only some 60-odd miles yet can be like a different world...daffs were weeks ahead and what was that about pesky snow?? They didn't see a flake! Of course, north of me just a bit they are more of a zone 6, so I'm not complaining either!

At any rate, isn't that hellebore up there lovely! We are impatient and will look back on this in the heat of summer...

Hey, your 'Pine Knot' Hellebores are finally in bloom! Mine kind of fizzled. There are a few buds still, but they don't look like they're going to open. The one that I thought was going to be a really pretty color (like yours) turned out a bit muddy.

I can't wait to see what the 'Chocolate Chip' ajuga looks like. I've never heard of that.

Hi Blackswamp girl,Mmmmmmm chocolate chips.Cookies....Hope you post a picture of the Ajuga.I like your Hellebore, its nicer than the ones i have seen here in the nurserys.Patience is something i have still not developed.Keep telling the seeds to germinate, and the seedlings to grow into strong plants!

Patience...yea...it's taken many years of gardening to teach me more patience, as well as: "it's okay if you cannot control every little thing-it all works out in the end". I mean, how many times has a beloved cultivar died off, only to give me a better idea to plant something prettier! Still, hard not to have ants in ones pants this time of year (as long as they're not ticks!)