Stop the Presses... Another Bloom for Bloom Day! 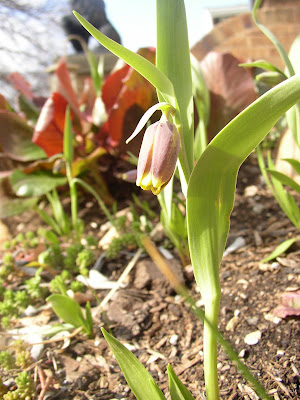 I know, it doesn't look like much. But it cheered me this afternoon to see that my fritillaria uva-vulpis (aka fritillaria assyriaca, aka Fox's Grape frittilary) were not only back to vertical after the heavy snow... they're blooming! (And wonder of wonders, they actually look like the picture on the package.)

When investigating these frits, I found some interesting information via the charming Paghat's Garden website and verified it elsewhere: This fritillary has more DNA than any other plant or animal yet discovered--about 25 times that found in the cell of a human being. Why it has that much, nobody knows.

These last-of-the-bag frits, which ended up in bare soil where I had extra space (and they have no competition) are blooming now. The 20 or so that I interplanted with thymes, 'Bressingham Ruby' bergenia, and other plants meant to better show them off are a day or three behind. It doesn't make for great pictures right now, but it is promising. And all should multiply to make an even better show next year. 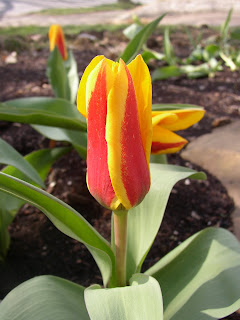 And here are the tulips that didn't quite live up to their picture. I'm actually starting to warm up to these guys. My initial disappointment is past, they glow in the sunshine... and all of your comments made me feel better about them, too.

Out of the rest of my tulips, only a small handful remain mostly horizontal post-snow. Of those, the stems only seem to be bent--not broken--so I'm letting them go for now. If they remain horizontal but still bloom... well, then I'll just have a nice bouquet to bring indoors, right?

To see what's blooming in other gardens around the world on this 15th day of April, 2007, visit Carol's April Bloom Day post at May Dreams Gardens.
Posted by Unknown at 5:09 PM

I agree, definitely worth an extra post to get these beauties in. I did not know that about fritillaria and their DNA. I'll have to read more about that!

I had to post an addendum to my Bloom Day post as well. All these bulbs, especially the tulips, make me envious of you cool weather gardeners. I know there are bulbs that are supposed to do well in Central Texas but I've never pursued it. Maybe I should.

Gorgeous blooms - I'm jealous! I have some scilla that is just about to pop open - maybe tomorrow - but everything else is just beginning to come up!!! At least I can enjoy your beautiful flowers while waiting for mine - thanks!

I love Frittalries,I like the name uva Vulpis.Under fox?Glad it looks like what it should from the picture.The tulips are so cheerful though in then colour though.Nice to look at in April when everything else is warming up slowly.

Carol, all of the scientific information I could find online just mentioned them at the "lots of DNA" end of the spectrum. Don't they look rather unassuming to have all of that DNA, though?!

Susan, thanks for stopping by and leaving a comment so I could find your wonderful blog, too! Your bloom day addendum was much showier than mine--those Texas bluebonnets are gorgeous. They always make me want to try lupines again here. :)

Kris, I appreciate you stopping by, too. I love the blue of those scilla--I think I might have to plant some of those myself in the fall. Such a cheerful color in the spring!

Snappy, nice new profile picture there. You look like life is treating you well! You know, I'm not good enough with Latin to know what "uva vulpis" means... I keep meaning to get a book on botanical Latin someday. By the way, great pictures of cherry blossoms on your blog--I can't wait to see some here!

One might need to get down on hands and knees with trifocals to see it, but the Frittilary is an interesting plant. Paghat's garden is a cool site - it amazes me how often I'm researching something that grows in Austin and google sends me to her pages in the Pacific Northwest.

I couldn't even comment on the previous post, overcome after seeing one beautiful Hellebore too many in the Bloom Day flowers. The colors are so gorgeously moody - maybe kind of Art Nouveaux? This one sure fits your study in contrasts parameters, Kim.

And congratulations on the Mouse & Trowel nomination. I was so relieved to see that you also thought it was a furry animal at first... it was some time before Philo and I had a lightbulb moment, and thought of the pen/quill/mouse analogy. I was afraid it was age, so thank you for being just as flakey while young ;-]

Do fritillarias stink? I thought I head that they smell bad and was wondering if this was true. I like your tulips. I think I have similar tulips. Mine are orange, although not he orange I was expecting, and are a little on the ummm short side. Again, not what was advertised. I will wait for some sun to see if I like them alittle better.

Hurray, another bloom! Things are looking up! Frits are so cute, aren't they?

So much DNA, so little time! I'd love to have them even if they did stink. My tulips were 4 inches high under the snow by the greenhouse. It'll be awhile before the scillas in the garden pop out. You lucky dogs. Or should I say, your lucky dog? Oh,yes, Kim, that was Atriplex hortensis, pigsqueak, orach, mountain spinach, all good to ear raw or cooked and a fab floral filler esp. w/delphiniums, campanulas, and lady's mantle. brooke www.woolwood.blogspot.com www.dirtdivasgardening.com

Annie, it's so funny that you mention your amazement at your commonalities with Paghat's garden site... I have often thought the same, and all three of us garden in such different places! (And it should make you feel even better to know that I never had the lightbulb moment you and Philo did re: the mouse! *grin*)

meresy_g, I asked the same question--I think of Don in Iowa, but it could have been of Craig at Ellis Hollow--and was told that only the "crown imperial" frits have a noticeable stink. (I couldn't figure out if the smell that was assaulting me was the frits or our friendly neighborhood skunk--apparently it was the latter, and I don't smell anything there now.)

Yolanda Elizabet, they ARE cute! They should get taller next year, too. Apparently they are usually shorter the first year.

Alaska Diva, thanks for checking in and answering my question. I have lots of atriplex hortensis volunteers this year, and now I'm looking forward to combining them with lady's mantle flowers--that would be gorgeous. (By the way, I've always hear bergenia called "pigsqueak," but I can see it applying to the fleshy-leaved orach as well. Such a fun name!)

Glad to see you having a break in the weather too! Here's crossing fingers that it will last!

Hey Kim, for once I have the same uva-vulpis blooming when yours is. We've been about 2 or more weeks behind you it seems so I'm surprised with this turn of events.