I was very excited to find seeds for Mexican Feather Grass, stipa tenuissima aka nassella tenuissima, earlier this spring. For the past couple of years I have noticed its lovely fine foliage in garden pictures and admired the way it gracefully arches sideways in the wind. I potted up a few milk cartons and stuck them outside with the rest of my winter sown pots. They sprouted late--possibly set back by the early April snowstorm--but I did end up with half a dozen seedlings by the end of May. 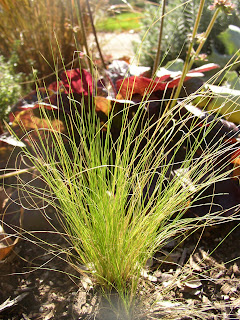 My front yard seemed the perfect place to site these seedlings. Mexican Feather Grass is supposed to be fairly drought tolerant, and my other xeriscape-friendly plants thrive there. It is a Western exposure, so I imagined they would look like long ponytails (Ponytail grass is another of its common names) whipping around in the wind, adding lots of movement.

There are quite a few thick-leaved plants there, from purple salvia lyrata to the glaucous leaves of sea kale, crambe maritima. Some grasses, including carex buchannii and 'Hameln' pennisetum, were already in residence in that bed, but I was counting on the Feather Grass to add some more fine texture. Its pre-flowering fresh green color would be a nice stepping stone between the dark greens of Spanish foxglove and the golden tones of variegated sage and the chartreuse 'Aureum' oregano. 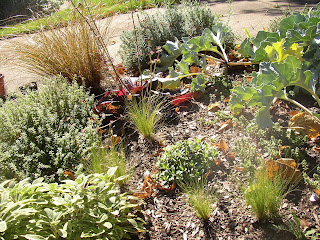 Even though they were first-year plants, I admit that I did not water my feather grasses perhaps as much as I should have early on. In my defense, it was hard to remember to water them as they sat, small but uncomplaining, amongst the water-shunning likes of lemon thyme, lavender and sedum.

As you can see in this picture, they never did get taller, flower or fill out--nor did the silene maritima 'Compacta' that I planted in the center of them to act as something of a "ground" for the grasses. The silene was a last minute addition, so next year I'm going to try something else there instead--possibly a short salvia like 'Marcus,' a moody 'Matrona' sedum or maybe a wine-red portulaca.

As for the Mexican Feather Grass? Well, what happens to it over the winter remains to be seen. I've seen it listed as hardy to zone 5, but my seed packet more conservatively lists it at zone 7. One reviewer on the wonderful DavesGarden website is in an Ohio zone 6 like me and says that first year plants seem to come back the next year for him/her, while plants that have flowered die off over the winter. That gives me hope... but I'll wait and see.
Posted by Unknown at 1:10 PM

No, no, wait a year. Maybe I'm too biblical, but I believe everything (even weeds!) deserves another year. This has been a weird year for drought, heat, etc. See what it does next year before you can it.

I had pony-tail grass, Kim, two clumps of it a couple of years ago, and it didn't overwinter for me. Maybe if you have good drainage it will, but here in our Zone 5b garden, nope, nada. I just treat it as an annual if I see it somewhere, because it IS intereseting with those feathery flowers.

I have quite a few feathergrasses planted along the curb, which I never water. They look pretty dried out right now, but they always seed out and come back in the spring, looking great. If yours can make it through the winter, maybe you'll be pleasantly surprised with it next spring.

ann, I'm definitely giving it another year... I just don't know if it's going to give me another year! I do occasionally see it sold in qt containers in the spring as a container filler, though. Maybe if these don't come through the winter I will try again with already-established plants.

Jodi, I do have very good drainage here, so maybe that will give me a fighting chance! (So good, in fact, that I will not buy more moisture-loving plants for this garden.) I'll let you know if the drainage seems to make a difference.

Pam, I hope so. I love the looks of this grass in the southwest and in Austin gardens, too... it would be nice to see it happy in mine as well. I have already overwintered some marginally hardy plants (carex alba and carex buchannii) so maybe this is a good place for them here. *fingers crossed*

I have had stipa tenuissima in my garden for a long time. I don’t believe for one minute it would be bothered about water – I get it seeding in cracks between rocks. I was surprised to see them so small though - but this is probably due to them being young plants too.

Here in my Scottish garden once they start to die down in winter and the wind blows bits away I tend to give them a complete haircut to the ground. They always come back and yes, come to think of it, they do get bigger the next year :-D

However, I also agree with you. When I plant something and it doesn’t give me the results I was hoping for I also consider pulling it out! I always use it as an opportunity to plant something else :-D

I love the looks of what you have there, Kim. Maybe you need to remember the old adage, "First year they sleep, second year they creep, third year they leap."

I'd like to find a blue festuca that does well. My 'Elijah Blue' just never stays looking nice for me. Any suggestions? I thought I'd read that there was a variety that performed better than Elijah Blue, but I can't remember what it was.

Good things come to those who wait. I agree with everyone else, leave it and see what comes back in the spring. You might be in for a very pleasant surprise.

Oh yes Weedhopper, you must be patient. They will give you many years of waving pony tails...if they survive the winter. The sleep, creep and leap usually comes true if you can stand the wait.

Good luck with your Mexican Feather grass! Hopefully it will survive the winter.

Stippa tenuissima grows beautifully here, but this is southern Portugal (zone 10 I would say). They take about a year to get well established, but then they grow as hell. They hardly need any water. If your make it trough the winter they would look great with Sedum matrona

I've tried the Stippa to no avail. I hope your winters over and thrives next year. I like that garden anyway.

I don't have any of this grass, but my prairie dropseed arches gracefully, and winters over great in my zone 4...just a suggestion if you get sick of waiting. I tend to agree with the sleep, creep, leap idea, though. Maybe that's why I get so many projects going-one gets frustrating, so I turn to another for distraction. (Especially when patience is required! ;-)

Shirl, thanks for sharing your experience with the stipa. Do you know what the equivalent of your Scottish garden would be here in the US, in terms of our hardiness zones? I may have to go look that up--I'd guess that the seas make you at least a zone or two warmer than I am. It would be interesting to know that.

Kylee,, I hope it at least creeps next year--my real worry is whether it will overwinter at all! lol.

As far as the fescue goes, there's a 'Boulder' something (or something 'Boulder') and also a 'Siskiyou Blue' but I don't remember ever seeing a comparison of all of the types. Honestly I've had really good luck with, of all things, the Burpee seeds for plain old unnamed blue fescue. Mine are not out in full blazing sun, however--they get some afternoon shade. Maybe that helps them keep their color better?

Carol, I hope I am pleasantly surprised in the spring. :)

Lisa, I know... I need to be patient. *grin* I was just hoping to get something of a display this year, since I'm not sure about the whole overwintering issue!

gintoino, thank you for stopping by and leaving a comment! I went to visit your blogs (and am kicking myself for not knowing Portugese--or whatever language you are using, so I could read along) and I am very impressed by your wonderful insect pictures. I'll definitely be back. :)

layanee, uh-oh... that doesn't bode well for my stipa, that you couldn't get it to overwinter! Ah well--like you, I enjoy that garden anyway. And maybe since it's well drained the stars will align and I'll have a lucky winter.

Lisa, oh, I already KNOW that I need to tuck some of that prairie dropseed into the garden! I'm thinking that I might use that to edge the front sidewalk... but maybe tucking it in to replace the stipa (should the stipa not come back next spring) would be a good way to tie everything together. Hmm... :)

i HAVE BEEN READING THAT THIS GRASS IS LISTED AS A NOXIOUS WEED THAT IS BAD FOR THE NATIVE PLANTS. I BOUGHT SOME, BUT WILL BE TAKING IT BACK TO THE NURSERY OR MAYBE JUST THE TRASH CAN!