I really expected most of my October color to be provided in the form of foliage. I swear that by this time last year, my 'Halcyon" hostas were beginning a very punk, acid yellow phase and the tips of my 'Rotstrahlbusch' switchgrasses were a dark, brooding red. Both plants are still looking rather attached to their summer blues and greens right now, however, while a surprisingly large number of other plants are still in bloom. 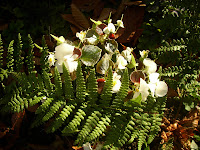 Not only do I have a lot in bloom... but many of the flowers showing off right now are, of all colors, white! The wonderfully scented tobacco, nicotiana sylvestris. The white brushtips of chocolate eupatorium. A stray white Japanese anemone that snuck in amongst the pinks somehow.

I think I have mentioned before that I dislike white blooms and the way they age--picture the browning mush at the end of a branch of white petunia here--and that white flowers seem a little harsh to me through the summer months. 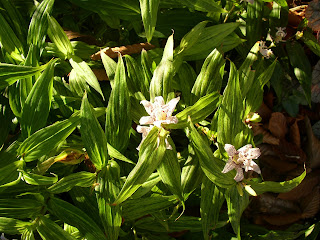 I am discovering that I really enjoy white flowers in the fall, however. Maybe it's because my fall whites tend to be small and dainty, like these blooms on the toadlily 'Lightning Strike.' Maybe it's because the slants of fall sunlight seem to illuminate the flowers instead of bouncing off of them flatly like they do when the sun is more directly overhead.

Or maybe they're just a relief to my eyes after the smoldering colors of September. Something to clean the palate, so to speak, before autumnal colors begin to dazzle. Probably all of the above. 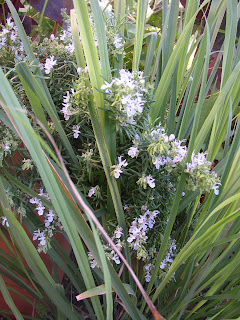 The other big contributors to flower color right now are the herbs. Here you see the lovely light blue of 'Huntington Carpet' rosemary in bloom. I grow other rosemaries for taste so I don't know if it has much culinary value, but it certainly cascades nicely through a huge lemongrass.

I haven't been able to stop my cinnamon and lemon basils from blooming all summer, but now an unnamed dark purple variety (a cutting from a friend) is joining the show. My melon sage is covered in warm red blooms, and my golden pineapple sage is flowering in a true fire-engine-red hue. Common oregano is blooming, too, for the first time this year. Just as it was preparing to bloom earlier this summer, I cut it back to harvest the leaves for cooking.

Following is a list of all of my October blooms, with N=New, R=rebloom, F=Fading:

Wonderful photos of the begonia amongst the fern leaves and the Tricyrtis. The dappled light and low autumn sun sure makes for great pictures. Amazing you still have so many things in bloom.

What a long list! I like your idea about the white flowers in autumn...I think the light does make a big difference.

What an amazing list of plants still in bloom! I could almost smell your rosemary...fabulous:)

I really like that rosemary too...cool that you still have so much in bloom!

Good to see you are enjoying your white flowers at the moment. My Japanese Anemones have been wonderful!

Your bloom day list is long, and it sounds like a very colorful garden right now. But I'm noticing the new header on your blog. Now THAT'S what I'm talkin' about! Very cool! Did you design it yourself?

Thanks so much, Ki! With my crazy work hours this week, I was afraid that I wouldn't get to see my garden in the daylight--much less get any good pictures. The two with the cool lighting were taking during sunrise on Sunday morning and I was both relieved and delighted. :)

leslie, the light really must be what does it. It's making me eat my "NIMG: No White Flowers!" words, that's for sure. lol.

wildlife gardener, I do love the smell of rosemary... I am sometimes successful in overwintering it (depends on how potbound it gets, I think, in my case) in the house, and I like catching a whiff of it when I accidentally brush against it. Yum.

lisa, I'm amazed! It's nothing like June, but much more than I expected for October, that's for sure!

Shirl, thanks. I am really surprising myself with this white flower thing. I wonder if people go through phases with these things?

Pam/Digging, I giggled when I saw yours and Shirl's comments back to back. I was wondering if anyone would notice!

Yes, if you look in the header you may recognize a few pictures. They are all 2- or 3-plant combos from my garden, taken over the course of the past summer. I realized that I had accumulated a lot of these somehow and thought that they would show up nicely even if sized smaller. Since I've been fascinated by quilts lately, it just kind of evolved. So far I really like it and may keep it up through the winter... quilt and blanket season, you know! ;)

I love the new header, it was the first thing I noticed.

That's quite a list of blooms for October. I wonder if we just didn't notice as much bloom in previous years because we were tired and not out in the gardens as much as we should have been? Or maybe there is just more bloom this October?

Thanks for joining in again!
Carol at May Dreams Gardens

That is a long list of blooms, Kim, and the herbs are obviously happy it's a mellow autumn.
The learning to like white flowers idea is interesting, but if it's a phase, I got stuck in it when in my 20's - perhaps from growing so many white passalongs like tall phlox, peonies, mockorange, Bridal wreath and hydrangeas.

Carol, I BLAME YOU! I doubt that I would have realized I had so much flowering if I didn't "have" to go around and catalog everything once a month. Thank you. :)

Annie, it still might be a phase... just one that you don't necessarily grow out of. I've always been a late bloomer, so me hitting it at 31 instead of in my 20s makes perfect sense to me! *grin*

Kim, I'm impressed that you designed the blog header yourself. I would keep it up year round. It's very distinctive and captures what your blog is about.

Count me as another admirer of your new header - I noticed it right away.

I was going to ask about the hardiness of the rosemary, but noticed in the comments that you overwinter it indoors. I'm surprised to see it blooming in the fall - is that it's normal season? I've not grown any of the creeping rosemarys before.

Pam, thanks! I'll consider keeping it... because, frankly, I really like it more and more every time I see it. But seeing as how I'm one of those girls who likes to move the furniture around every few months I can't promise that anything is going to stay in one place for very long. *grin* Even on the blog!

entangled, I have never had rosemary blooming other than in the fall... but here's the thing: They've either been in their first season as newly purchased herbs (so may bloom later) or they were overwintered indoors and then pruned heavily in the spring/summer as I wanted to use them. By fall I tend to use more sages and oreganos than rosemary for some reason.