A Brief Blaze & A Botanical Mystery

It took a while to arrive, and it didn't stick around--not for even an entire week--but I did finally get some good fall color this year. The unexpected star of the late show was this 'Diablo' (aka 'Monlo,' aka "Diabolo') purple ninebark, physocarpus opulifolius. 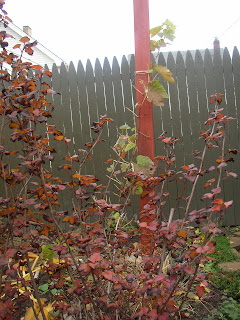 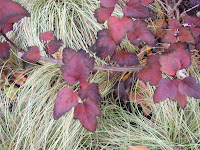 I don't know for sure that its Latin name means that its leaves are showy... but based on the plant's appearance I could easily buy that definition. It's a happy accident how well Diablo's fall leaves play off of the red-stained arbor post, but one that I'm looking forward to enjoying for years to come. Especially when the arbor is finally finished!

By the way, some of you who have your own ninebarks may be looking at mine and thinking, "Why are the leaves on her shrub so small?" That was my botanical mystery of the year! When I bought the plant last year its leaves were normal ninebark-sized. This year, I had these delicate tiny things instead. My guess is that our April cold snap came at exactly the right time in the leaf bud development to cause this. Any other theories? 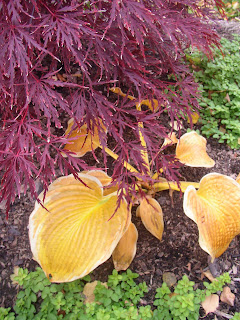 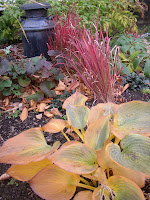 The hostas finally came around as well... mostly. 'Northern Halo' added a lot of zing below the slowly-turning Japanese maple, and my unknown blue variety turned a warm golden shade.

Last year's favorite fall-color hosta, which burned electric in front of some 'Powis Castle' artemisia as seen in this post from October, barely turned any color at all before its leaves bleached out and blew away.

While digging up a link to that post, I discovered that most of my fall color last year came in late October, while this year I had to wait until November to enjoy the turning of the foliage. Discoveries like this really make me happy that I have this blog for reference... especially since I can't seem to maintain a proper written garden journal for some reason. And my memory is sometimes a steel trap, and other times a rusty sieve, so I don't particularly like to rely on it! 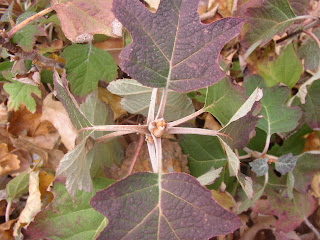 One thing I apparently did remember correctly, however, was the rich autumnal tones of my oakleaf hydrangea last year. I ran outside to take a current picture for comparison, and you can see that the top leaves are starting to get the idea but the rest of the plant is still mostly green.

You can also see that the plant is packed all around with leaves from the basswood tree in my treelawn. I love the way the leaves seem to "tuck things in," so unless I know that the plant should not have any extra winter mulch (for example, with lavender) I generally leave the plants with their little foot-blankets throughout the winter. 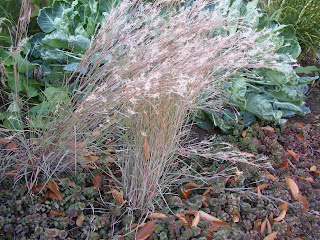 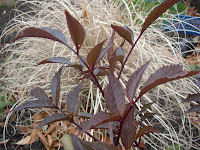 My biggest disappointments in terms of fall color were my grasses. The sorgahstrum nutens began to take on some gold tones but then bleached out quickly. 'Morning Light' miscanthus faded quickly into a straw-esque ghost of its former self, and did nothing to pick up the dark tones of the 'Black Beauty' elder in front of it. In mid-November, the neighbor's beech leaves were falling but only the seedheads on my little bluestems gave a hint that they realized how late it was in the season. 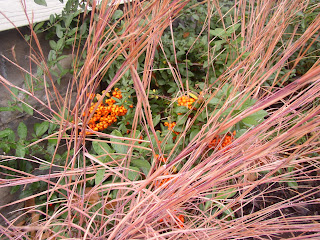 But finally, they turned. I know that I "shouldn't" like this combination of warm pink foliage and orange pyracantha berries, but I do. The color, the texture, and the unexpectedness of this combination just does something that makes me smile.

And with that smile on my face, I'd better end this post and get outside. Someone had the bad sense to go out and purchase another 40-some daffodils, 20 more species tulips and the last of the nectaroscordium at her local garden center the other day. (But I had been looking for the cute, short yellow tulip tarda... and the nectaroscordium is also called honey garlic. How could I resist something called honey garlic?!) With winter weather moving in and daylight fading fast, I'd best bundle up and get to it!
Posted by Unknown at 1:05 PM

Now who told you that pink and orange doesn't go together?? It certainly does. I even paid good money for an outfit with those colors. Don't you fret about color combinations. Mother Nature doesn't make mistakes. It is all in the eye of the beholder.

Agreed, sometimes the best color combinations are the ones that according to the color wheel really shouldn't work. When doing watercolors I try to restrict myself to similar colors which lends to a lot of orange-pink-yellow combos.

I'd be curious to know if you ever do find the definition of physocarpus opulifolius. My high school biology teacher had a book of latin plant name definitions which I was fascinated by, I've always been curious by how we use latin roots today (other than just in everyday language).

Your autumn colors barely arrived before December did, Kim! Your oakleaf hydrangea is so fine.

My Taylor's Encyclopedia of Gardening defines opulifolius as meaning "with leaves like the guelder rose".., so I then looked up Guelder rose and got Viburnum Opulus sterile...which I then looked up and found out that's the formal name for the oldfashioned, common Snowball Bush.

Physocarpus is bladder + fruit, referring to the inflated follicles of their one chambered fruit.

I love your rich, fall colors, Kim, even the pink and orange. I sometimes mix hot-pink and orange together in my summer combos, so why not fall?

It sure seems to me that the fall color is happening later every year. I could swear that I used to have all the leaves raked before it was time to think about Christmas decorations. This year, I'm still waiting for the neighbor's Bradford Pear leaves to fall.

Yeah, like they said...who said it's a no-no to like pink and orange together? Probaby the same sorts that decree fence heights, no clotheslines, and gazillion-dollar plunge pools are de rigeur in yards! You go, girl: your colour might be late but it's delicious! :-)

Lisa, LOL! Well, I guess it might have been the same people who told me that black and blue can't be worn together, and I break that rule regularly, come to think of it. *grin*

meagan, you keep talking about these mythical watercolors you do... I think I need to see some tomorrow night!

Annie, THANK YOU! I think that I need to get that book--or one like it that discusses botanical Latin origins. Things like "pinifolius" I can guess, but I never would have connected this to the snowball bush. (Or known it as the Guelder Rose, for that matter!)

I googled some pictures of viburnum opulus, and... well, I guess. I can sorta see it, but some of those viburnum opulus (opuluses? opuli?) look more like maples than like ninebarks to me.

Connie, thanks! :) I'm still enjoying the bluestem, but the wind these past two days really did a number on most of the other colorful plants in my garden.

Pam, that's a good point! Heck, some plants (a few roses and lantanas come to mind) seem to have both colors in their flowers, now that I think about it.

entangled, it was kind of strange today. Half the neighborhood was out stringing Christmas lights and the other half was out blowing or raking leaves... felt very, very strange.

Jodi, I guess that the fun of rules is breaking them, right?! *grin*

Kim, I love how thorough you are in your cataloging of fall colours. You're right - it must be nice to look back at last year's garden and compare. Thanks for inspiring me to do the same.

Kim- I'm glad you finally got autumnal color! This was a weird year here too, as I've never had to rake leaves in November. As for your leaf-size mystery, I recall reading that if a plant is pollarded, it will have larger foliage. (It was recommended that some shrub be pollarded to encourage huge leaves. I think it was Cotinus.) My guess is that the plant had been cut back severely b4 you bought it & now it is having its normal leaves. If there is not substantial winter die-back & the leaves are large next year, then I'm wrong.

Beautifull fall colors Kim! Not much of that in my garden...still lots of flowers. It's like a colder spring :-)

Kim, what dynamite combinations in terms of both colour and texture. The grasses, in particular, really punch up what's rubbing shoulders with them.

I'm in a hurry so I'm going to have to pop by again later in the week to catch up and read -- and view -- the other posts. Lovely, lovely.

Im bad for buying bulbs on offer. When i went xmas tree decoration shopping I stumbled upon the spring bulbs lost amongst the tinsel and fairy lights.I bought crocus, queen of the night tulips, some Narcissus, etc.I have planted them now, but am waiting expectantly for signs of growth.Alas there is a lot of bare soil.Imagination is great thinking about what all those bulbs will look like.
You always follow your instinct with colours, and planting combinations, and they all seem to work (Or you only post the best ones).

Nice color, Kim! Did you get the bulbs in?