Well, as Lisa at Greenbow guessed, December's tardy orchid is still blooming for me a month later. But I got an even better surprise this month: The first bloom ever on my Schlumbergera! 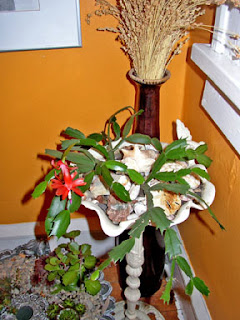 About four years ago, while I was in the midst of moving into this house, some older friends of mine at work retired. When they packed up their office, they gave me their huge spider plant as well as cuttings from their Christmas cactus--which itself was a passalong from Julie's great aunt.

One of my volleyball teammates gave me the beautiful cast iron birdbath, which I quickly determined was too pretty for the birds, as a housewarming gift around the same time. And then I had some shells, and a few unique rocks... and so it goes.

See the gray pot on the floor with the scalloped edge? That's another birdbath, one that I discovered is not frostproof despite its claims to the contrary. So some funky sedums, colorful hens & chicks, and a few other succulents were added this fall, and I think I might add some string of pearls plants to the broken edge this spring as well. I can't wait to bring it outside.

Sometimes I think that I should have called my blog "The Repurposed Garden," considering all of things I have pressed into service over the years, in roles that they were never meant to play. But I like to think that they are all a bit happier this way... that it's better for a sculptural birdbath to be reused as a planter than chipped into a bed of rock mulch. That it seems more fitting that the sturdy pine bedframes I trashpicked a couple of days ago will stand proudly as trellising, rather than being reduced to splinters in a trash compactor.

I believe that there is an inherent beauty in usefulness. Sometimes I think that's what winter is all about--a time when the obvious beauty is stripped away and we are mostly left with other things to admire: utility... history... and the friendship behind a very pretty passalong plant or two.

Second the vote as with chuck b. It gives the old brain a workout to figure out how things can be reused. Good work!

I've always admired your knack for 'trash picking' and coming up with something 'new' for your garden.

Passalong plants are my favorites, no matter what the bloom because they also remind of us of the person we got it from.

I'm into recycling stuff too and it's amazing what the brain comes up with in terms of re-use. Love that white birthbath of yours and the way you use it as a planter. Nice bloom too.

At Bliss there are outdoor and indoors blooms for GBBD.

Kim: You never disappoint! Did I mention that I love your wall color? I think you showed it in a previous post. So warm and your cactus flower contrasts beautifully!

Congratulations on getting a flower on your cactus! Perhaps the orchid explained that it too could be a star if it opened in time.

I think "The Re-purposed Garden" would have been an excellent name. Very apt. Though your junk transformation extends well beyond the garden.

I'm with you on the re-purposing! And passalong plants...that's what MY Bloom Day post was about! Great minds or what?! ;-)

Excellent post and I also like that wall color, Kim. But the name Study in Contrasts is better than Repurposed Garden if you ask me.

The Missouri Botanical Garden says these Thanksgiving cactus are from Brazil, where they grow in trees and are pollinated by hummingbirds. Planting your Schlumbergera in that elevated birdbath may have made yours think it was in a small tree - no wonder it felt right at home!

chuck b, thanks! That brings to mind the question: What does a (relatively) tropical gardener like you think about during the garden down-time? (Or do you just not have down-time?)

Frances, that's true--it sure is a good brain workout! And sometimes pretty things sit in the basement for a while before the rusty brain churns out an idea for its use, I admit. :)

Carol, thank you... "new" being more like "new to me" than actually new! But it works well with my budget... lol.

Yolanda Elizabet, thank you! I would have guessed that Bliss would have both indoor and outdoor blooms. You always have action going on over there!

Layanee, I love the wall color, too. I have to admit, though, that it was my boyfriend's idea. The funny thing is, I wasn't sure I liked it until I painted the ceiling the same color--now the sunshine just kind of wraps around you! And since it's a "walk-through" room, it hasn't gotten old yet.

Nan, I love that idea. Flower conspiracies are just fine with me! *grin*

Meagan, good point. I was walking around the other day thinking about just how bare my house would be without my trashpicking and repurposed finds.

lisa, oooh! I will have to go check that out... and catch up on all of your winter projects, too. Because I'm sure that there are plenty!

Annie, maybe "The Repurposed Garden" should be a book? (As if I were able to write and finish a book!) But you are probably right about the name.

I had no idea that Thanksgiving cactus grow in trees in their native land--but based on the tubular flowers I can see them being pollinated by hummingbirds. Very cool--and it makes sense now that mind are thriving with very little in the way of actual soil there.

I admire your creativity in seeing beauty in what others see as garbage. I wish I had that gift. Of course I rarely get the chance at things, as DH is always on a get rid of clutter mission. I look forward to a post including that new trellising.

Spring is 'right around the corner', Kim ... then we can all rejoice! In the meantime, it's fun to meet our other creative side. Isn't that what 'A Study in Contrasts' is all about?

Purposefullness (did I just make up a word?) is wonderful, truly. So - as long as you don't try to root something in one of the martini glasses, I'm cool with it. :)

I think all gardeners are recyclers at hart. I walk my dog every morning and I always coming home with something that some else put in the trash. Today I come home with metal bed headboard.

Keep that up and you'll surpass Lisa a the champeen "repurpose"er uh, recycler.

I like the ingenious ways you utilize various objects, found and otherwise Kim. You have a clever mind :)
Keeping things out of the landfill is always good!
Your Christmas cactus looks neat in the birdbath!
I love that orchid too.
I'll bet those pine bedframes will look great as trellises.

Hello
I have posted some of my January flower pictures on my blog as well.
bloomingwriter inspired me..

There's a William Morris quote that you probably already know - goes something like "Have nothing in your houses [and gardens!] that you do not know to be useful or believe to be beautiful." And when you find it on the street - so much the better! You are a master repurposer and there are probably a lot of us now who look at things and think "what would Kim do with that?"
(I love that wall color too and was wondering if you might share the name?)

Mr. McGregor's Daughter, it's funny that you say that... because I'm always on a mission to de-clutter as well! But I guess that after rebuilding a household post-divorce, I had just enough room to add some extra things, too. :)

Joey, that's right. *grin* I've always wondered why it was "Form vs. Function" instead of being less adversarial!

Hey, Pam... those martini glasses can always be washed well, you know! ;)

Rusty, did you see me bowing down before you?! I would LOVE to find a metal headboard! (I know, I do find cool stuff. Just no metal headboards... yet.)

Ki, that would be cool. I'll never catch up to her in number of projects, tho! lol.

Kerri, thank you. And I do hope that they will look good! I have to figure out what to paint/stain them with, however. I know that they won't last long otherwise.

Kris, I have heard that quote before and loved it, but wasn't aware that it was William Morris. (Now that I know, it fits, of course!) I'm blushing at the thought that someone might find my repurposing inspiring, but I know what you mean--I often find myself looking at things and thinking, "Look at that bed of foxgloves! Hank would be in heaven!" or "Cardoon... I think that Kris showed one of those a few weeks ago, and I drooled over it." :)

I did go down and check the leftover can for you. It's Behr eggshell interior enamel (I should have bought flat enamel to hide the wall imperfections, but was thinking more about shininess adding to the light in there) in a color called "Autumn Orange." If you look at the Behr.com site and search for the color, it looks way more butterscotch (on my screen, at least) than it does in person.

Wish you lived closer. Our garage needs someone like you. :)

Wasn't it Rennie MacIntosh, the venerable architect, who said that all things in the home should be beautiful and/or useful? I think the same goes for the garden!

Hi Kim, I found your site thru Lisa at miller time.
Great post and great blog! Love the pic of Coco. :)

Enjoyed visiting your lovely blog and I certainly agree with and admire your re-using found objects. Best regards, Jon on 1-22-08 at http://mississippigarden.blogspot.com

A belated Happy New Year to you, blackswamp girl. I love your creative skills with the bird baths and the plants. Wonderful :)

Since I realise how important it is to recycle things in order to help the planet, I also try it as much as my brain can stretch.
The less we buy, the more things we re-use, the less waste it will be and less co2 in the air by producing new things.

I red in one of the previous posts, that you worked 80 hours a week three in row - o my god! are you better now?
I also worked like this some time ago, but everything has its limits. I hope you are fine :) Greetings.

Kim, I don't know how I missed your bloom day post. Hmmm sometimes I rely on this Google reader and it doesn't always tell me when someone posts.

Your repurposed containers are great. You must have some serious sunlight for those in the gray pot to florish during winter.

I just love christmas cactus. Mine bit the dust this past fall for no apparent reason. At least to me anyway.

I believe that there is an inherent beauty in usefulness.