I have this little corner, right next to the garage, where I've softened the line of the driveway/sidewalk by using some of the indigenous (as in, came with the house) landscape block to round off the corner. Last year, the little corner also contained one of the tile planters that I moved closer to the house this spring. 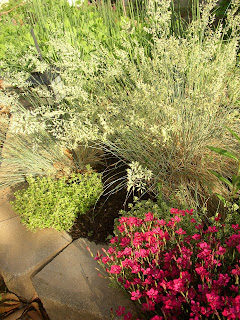 This year, without the orange of the tile planter, the humble combination of golden-edged lemon thyme, blue fescue that I started from seed, and the dianthus that Mom gave me a start of several years back has really been capturing my imagination.

It's particularly pretty in the morning light, with the fescue and dianthus both in flower: 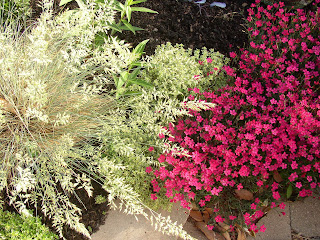 I didn't do a great job of combing out the dead blades in the fescue this spring (okay, I didn't do it at all, I admit) so the bleached blades mingle with the healthy light blue ones to make a ghostly white impression in the rising sun: 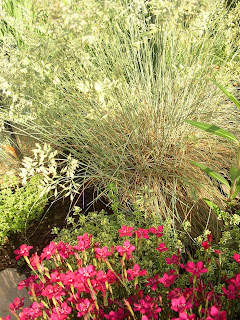 Right now I'm kicking myself for not being organized enough to have planted my "cole crops" as early as I should have. If only this red cabbage in the foreground was a little bit bigger, it would really have made a statement next to the dianthus: 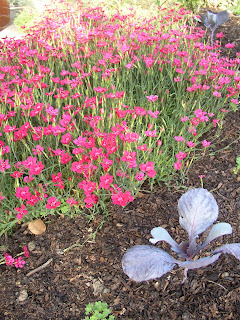 I'll make a mental note next year and see if I can remember to try that. It seems like my version of GADS is particularly oriented toward forgetting what I had planned to improve on from year to year, however. For example, I don't have all of my tomatoes and peppers in the ground yet...

But enough of that negative talk. Instead, let's just look at my favorite shot (so far) of the little corner garden. You can see all of the plants mingling pleasantly, with the bottom of the asclepias incarnata 'Cinderella' (WS'd last year thanks to the generosity of Colleen at In the Garden Online) showing at the very top left: 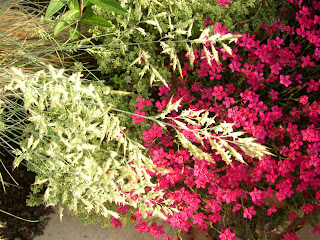 There, that's much better. Kind of cooling, even, which is good for such a hot, humid week.

On that note, I should say that the weather finally broke tonight. The storms came through just after my 2's game at 6pm (playing 2's in 95 degree heat and heavy humidity is not fun, btw) and soaked the garden with a half inch of rain. But the air outside is now much more livable, and the high tomorrow should only reach a bit past 80. Whew!
Posted by Unknown at 9:11 PM

So that's what indigenous means!

Love the poofy dried grass flowers. I never cut mine back.

No wonder you like this corner of your garden. It is very pretty. I was thinking before I read the narrative that I really should plant more grasss in my garden. I love the way it looks with the dianthus. A good combination.

I love this combination---it's so soft and soothing. My 'Cinderella' never germinated last year, but this year I ended up with 2 nice seedlings. I don't think I would have tried them again if you hadn't mentioned that they came up for you ;-)

Very pretty! I really like that fescue in flower.

Very nice combo, Kim! My grass got its' dead-hair cut kinda late, and I got some live stuff, too. I like the way yours looks though, so next year I may just "forget" :)

You're embracing the hot pink! (Or is it magenta?) That is an entrancing combination.

A very pretty combination. You should be proud.~~Dee

What a great combination...the color, the foliage, each thing sets it corner-mates off so nicely!

I'm with MMD and noticed the pink right away! Looks great and I also loved your 'indigenous' stone remark!

The last photograph is stunning - the Dianthus looks amazing in combination with the fescue. Funny about combing them out in spring - I always plan to and then never get around to it. Maybe one of these years...

I'm glad the weather has given you a bit of a breather.

Haven't visited for awhile so this is the first time I've seen your new blog look. It looks great!

Katie, I did take a little bit of liberty with the word... it usually means something natural found on a site, so I'm not sure that manmade retaining wall block qualifies! :)

chuck b., I think I might leave these flowers, too. I usually cut the flowers off of any grass that tends to reseed itself, but these are so pretty.

Greenbow Lisa, that was a happy accident, and I love it, too. The grass was moved there to show up against the orange of the old chimney liner, and the dianthus there because I wanted something fairly flat/short where the garden met the sidewalk. When I moved the liner out, I was amazed at how nice these look together!

Yay, Colleen! I was hoping that trying the 'Cinderella' again would do the trick. It only seemed fair that you got some of your own, since you were nice enough to send me some seed. :)

Lisa, maybe we'll trade off. I'll probably cut my dead-hair out next year, and then when I see yours au naturel I will decide to let mine go again the following year. lol.

Mr McGregor's Daugther, HEY! This doesn't count in the pink tally... it's a passalong plant! (That's my story, and I'm sticking to it! lol.)

Thanks, Dee! As I mentioned above, it was more of a happy accident than something I did on purpose, but I definitely like it. :)

Leslie, I know. Why can't I do these combinations on purpose, darn it?!

Layanee, shush. You and MMD are going to give me a complex--I might have to rip some of this pink out pronto. ;) tee hee.

Smudging Kate, thank you. It's really nice when the wind blows, too, and the grass ripples. That's one of my favorite things about these grasses, be they short medium or tall!

Funny how gardening and spring gets in the way of blogging and visiting other blogs, isn't it? I feel like I'm so far behind on posting myself that I'll never catch up with anyone else, either... and yet, I hate to let spring pass me by.

I still have pepper seedlings to plant, but my notes show that I planted the tomatoes about the same time last year - even though I intended to do it earlier. So much for intentions.

I noticed the pink pink too, but I'm with MMD - it's really magenta, not pink. Completely different. ;-)

Yes, that cabbage would look impressive against the dianthus.
I also have some peppers to go into the vegetable garden. Somehow I got very late with some vegetables. I need to be more organised (but that's what I'm telling mayself for more that 30 years ;-) ).

I think my eyes must be very tired--or my screen resolution is wrong. Your photos are probably wonderful, but are too small for me to see very well!

I sound like my grandma. I'm not that old!

That thyme looks great - we've been selling it at the garden centre I work at, and I have to admit, I kept seeing it and thinking "herb garden" rather than "any garden." But it looks great, and I know the ones in the 3 1/2" pots we sell are vigorous growers. Do you think it's very hardy? I generally get even more die-back on my thyme than I do my lavender here in a freeze/thaw zone 5b, and I wonder if it is worth trying out, and how much winter pampering it would need...

When you say you have a favorite corner, do the other corners get jealous?