An Update on the Overachievers

Remember The Overachievers? My littlest brother and his lovely wife, the ones who made a gorgeous new veggie garden with over 300 landscaping bricks and 10 yards of topsoil this spring? (It still makes my back hurt just to think about that!) Well, lest you think they're resting on their laurels, I should assure you that their garden is still moving along quite nicely.

In fact, I received an email several weeks ago that included some pictures of their latest construction effort. Check it out: 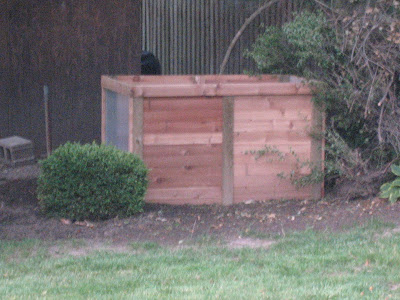 Did you guess that this is a compost bin? If so, you guessed correctly! They did a nice job on construction, and I'm jealous of this pretty bin--beats the heck out of my ugly black plastic ones, but those were the only ones that I could get my former husband to approve so I'm kind of stuck with them.

I didn't yet tell them that they'll want to have at least two bins, as they've been working so hard already and they can wait to start on the second one until this one gets filled up a bit. As you can see, though, they did start filling this one right away: 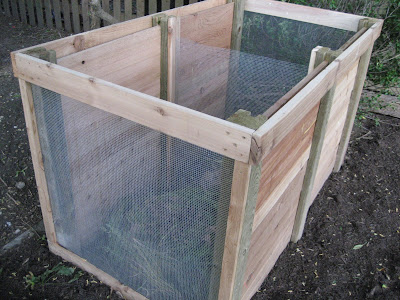 Compost bins are not the only environmentally-friendly feature added to the Overachievers' yard in recent weeks. They also ordered two white oak barrels (seconds from a distillery) to use as rain barrels at their house: 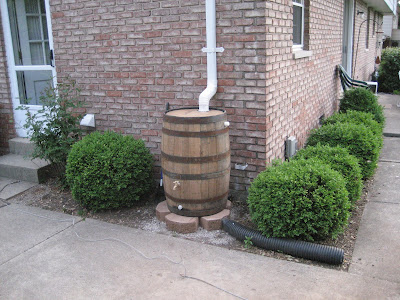 Jeff reports that the whiskey barrels smelled really good, and that they were very heavy. He was glad that the website where they ordered them (linked above) included shipping in their pricing, and that a friend stopped by the day they were delivered. He was able to talk his friend into helping him move the barrels so he didn't have to do that on his own.

I was promised more pictures as the garden starts to grow, but I know that they finally got their grapes, blueberries, and all the rest planted. And since I know that Jeff sometimes reads my blog, I would like to offer up this link to the Ohio State Extension Office's page on growing blueberries in the home garden. 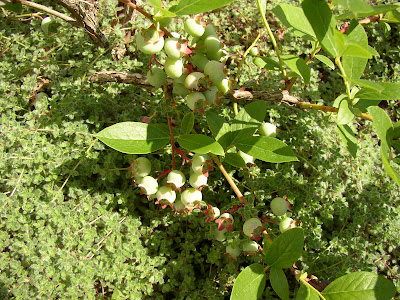 I think he wondered whether I was playing a cruel trick on him when I advised him to not let his blueberry bear fruit this year, so I'm letting this page back me up. As it says: " Blueberry plants normally do not need to be pruned for the first three years. Remove blossoms that appear in the year of planting and second year after planting to stimulate vigorous growth." It's not easy to do--I know that all too well--but it's definitely worth it!
Posted by Unknown at 10:46 PM

That is quite a nice compost bin and I like how the rain barrels look. They have been busy. Does your brother do work for hire? Say, for a gardener in a neighboring state?

And you are right about the blueberries! You have to get the plants to grow first, then you get more blueberries in the long run. The same is true of strawberries, pick off the blooms that first year. Hard to do but the pay off is worth it.

Carol, May Dreams Gardens.
(And your blog looks different. I like it, did you just update it or am I that far behind?)

Looks like someone should be building fine furniture instead of compost bins. I'd hate to throw compost in those bins :)

Like Carol says, it's tough to pick the flowers but in the long run your Blueberries will do much better

Go Amanda and Jeff! They are amazing:) Thanks for the updates on their garden projects, and for your really neat tour of your old neighborhood! It's always fun to read your blog, Kim. I can't wait to see your garden in person once I get back to Ohio!
Jane in Maine :)

Carol, I can certainly ask... but then, you saw that large garden they put in not too long ago. I'm guessing that they will be pretty busy themselves! *grin*

I did update the blog again a couple of weeks ago. Still not thrilled with the look, but I don't have much time to keep playing with it. Maybe later in July I'll have time to go at it again.

WiseAcre, me too! It certainly does look nice. Thanks for backing me up with the blueberries, too... Jeff keeps reminding me that I'm the sole reason they won't have blueberries this year. lol

Jane-in-Maine, are you psychic? I started writing you an email last night to catch up--and congratulate you on helping out your patient with that tough delivery! And here you show up in my comments... :) I also wanted to put a bug in your ear about switching your blog to google/blogger, so we can all leave you comments, too. Maybe when you move back to Ohio soon?!

Wow, that is one nice compost bin. I too am stuck with black plastic, but take consolation in the fact that black "disappears" into the background. Or so I am told. And I second the notion that any serious gardener is definitely going to want more than one composter.

Now those are some dandy rain barrels. They look good against their brick home. I bet the residue in the barrels will benefit the plants some too.

Your blueberries really look good. I will have to pass along this info to my sister who is growing blueberries. She has been a little disappointed in their beginnings.

Attractive rain barrels - what a concept. I wish the sponsored ones around here looked a little nicer. And the compost bin I thought looked like a hot tub from the side. Very nice.

Karen, funny you say that... that's how I sold the ex on them in the first place. I promised him that they would disappear into the shadows under the tree at the side of the house! And they did.

Greenbow Lisa, they do look really nice, don't they? I wondered what effect, if any, the residue in those barrels would have. I guess if daffodils like vodka, why wouldn't other plants like whiskey, right? ;)

I really do think that's true about the blueberries. I forgot to de-berry them when I moved them here 4 years ago, and I have regretted that ever since. I really think that they would be much larger and healthier if I hadn't stressed them out by letting them berry.

Mr McGregor's Daughter, a hot tub? Shhhh... I'm sure my brother doesn't need any more ideas on what to do in that backyard! ;)

Like minded siblings are a joy! Nice looking compost bin and the rain barrel is great. He is pretty good at construction projects isn't he!

Oh geez, I just wrote a long and rambling comment (honest!) and it came back with a 'blogger error' and some error number and said that I should go to blogger and...it's been too long a day! I'll be back (if this one works) soon.

I could be totally wrong, but it looks like they put a screen divider in the middle of the compost bin making it into 2 bins. And I totally want one -- it's ever so much nicer than my metal trash can composters!

They're doing great, aren't they? Love the rain barrels. Ours are black, because that's what Romie can bring home from work.

Romie built compost bins this spring. Oh, I haven't blogged about that, have I? That's one of the projects I was talking about earlier this spring. I keep forgetting to stir it up! Maybe we'll have great compost by fall...

That is awfully pretty to put compost into. I have the black plastic one for food scraps which keeps things a little too moist and three others built out of old palettes. Not pretty, but functional. And then... there is the other "pile" out in the field. Thanks goodness the property is large enough to make them disappear with distance!

Layanee, he would probably never admit this to you, but when we were younger we were like two peas in a pod. But once I went away to college and he got into high school that changed a bit--he was much crazier than I was! But yes, he is definitely good at construction projects. :)

lol, Heather... you know, I didn't even notice that screen! Maybe I was too busy looking at the wood, but until you pointed it out I hadn't noticed that they had divided it already. Darn it. They're even smarter than I'd thought. *grin*

Kylee, they really are! My rain barrels, if I can figure out how to get them home, are going to be white because that's what I can get through work. (I really need a truck some days. *grin*) I can't wait to see the compost bins Romie built--between he and your dad, you sure do have some handy men around Our Little Acre. :)

SMC, I would love to have room for the palette kind of compost bins. I just don't think that the little plastic ones that I have offer up enough room to get things cooking, unfortunately. I do plan to try some vermicomposting in the basement this winter, though... we'll see how that goes!

NICE!! I LOVE those rain barrels, and the price was actually lower than I thought it would be. Heh...I thought the composter looked like a hot tub, too. I'm excited to hear that you are gonna do some vermicomposting, we can be "worm buddies" :)! I'm finishing the switch with my bins this weekend, the bottom one is full and I think the wormies are done migrating to the new one. (I'll post about it next week.) Fun stuff!

I really like those water barrels, they have worked hard in their garden. Bob