As I'm sure I mentioned before, there are tons of weeds and lots of projects to get done in the garden. It was a beautiful weekend, and yet, I didn't work on ANY of those projects.

On Saturday, a group of my friends went to a Renaissance Faire because that is what Meagan wanted to do for her bachelorette party. I confess that I didn't quite know what to expect, and in fact anticipated that I would not enjoy myself. But my favorite parts of the day involved learning archery and getting to throw axes, ninja stars and throwing knives at chunks of wood mounted on the wall.

Today, which was probably the nicest day of the weekend, I did this: 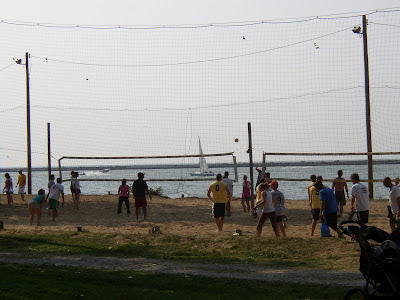 That is a terrible picture, by the way. The sky was blue the entire time we played, and the sun was shining... but I didn't think to take any pics of the actual courts until later in the day, when the afternoon sun made the sky look a hazy shade of grey. There was enough wind to make the games challenging--and to power sailboats across the waters of Lake Erie, as you can see in the background of the photo above.

This volleyball extravaganza, which began for us at 9am and ended at 6:50pm (LONG day!) was held at Whiskey Island--er, now known as Wendy Park. I spend an awful lot of time here each summer (women's 2's on Mondays, and co-ed 4's on Tuesdays and Wednesdays, right now) and I have a soft spot for this little hidden jewel that seems to become better known to the non-boating and -volleyball crowds each year.

I started playing sand volleyball here a few years after I moved to Cleveland, back when it was just a marina, a marina bar with great views and lots of picnic tables, volleyball courts, and a huge chunk of overgrown forest. In fact, the woods were so thick that you didn't have these views of river bridges and city skyscrapers that we enjoy now: 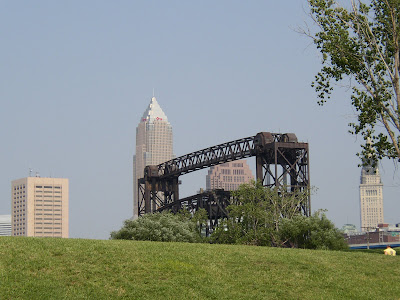 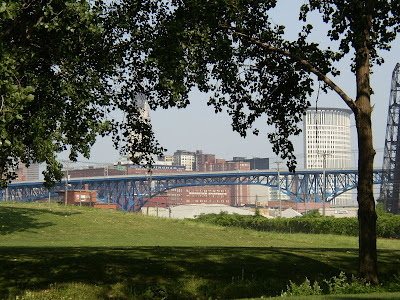 Nor could you see much of the old Coast Guard station, which the city now owns. They are renovating the access road to the old CG station, so people will eventually be able to walk out to it (and enjoy a few observation areas on the way.) Right now, though, it still looks a bit solitary: 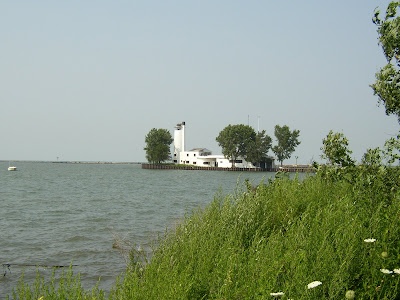 To the west, along the lakeshore, you see the "Edgewater" and "Gold Coast" neighborhoods of Cleveland and Lakewood, respectively. The Gold Coast is full of pricey high rises and mansions (of the real, not the Mc variety) and feels like another world compared to the humble houses in my neighborhood. It looks like big time when viewed across the water, too: 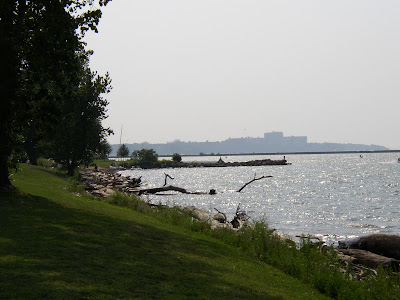 The mansions and other large houses on the Gold Coast were built long ago, and it's fun to walk through those areas. You can see wonderful examples of everything from Tudors to Italianate "palaces." I was lucky enough to be invited to a party inside one lakeside manse a few years ago, and it had all of the honest, craftsmanlike splendor you would expect from a huge house built in the early 1900s.

But I digress... and I sorely need to shower, and get my tired body to bed, if I plan to get up in time for work in the morning. I really just wanted to share a little bit of my beloved Whiskey Island on my blog... and give a small glimpse of my non-gardening life on a non-gardening weekend.
Posted by Unknown at 10:17 PM

What a wonderful weekend you had Kim. Isn't it funny that often when you dread going on an outing you end up having the best time.

Your neighborhood looks like great fun. 20+ years ago I played volleyball in sand. It was great fun. We didn't have such small teams because there was only one court in our small town. Oh the memories you have evoked by showing those playing.

The Lake's coast looks so pretty. It is good that you get to enjoy it.

Thanks for an interesting glimpse into your larger neighborhood, Kim. What a great way to spend a weekend.

We need these weekends...they keep us well rounded and healthy! I love your lake, it's beautiful!

There is life after gardening but don't tell the others I said so. ;-)

Personally I'd enjoy the archery, ax throwing, ninja stars and knife throwing more than the volleyball thingy. I love throwing things, can you tell?

Thanks for sharing this lovely non-gardening weekend, it sounds like you had a lot of (unsuspected) fun!

cheerio from the ninja gardener, duck!!! ;-)

Good for you girl to get away ... there is more to life than gardening! Much older ... and wiser :) ... I give you permission to enjoy days outside of the garden, Kim. *Big hugs*

Well, you know what they say, variety is the spice of life. And your life is spicy! LOL! Sounds like you had fun!

There is life beyond gardening and yours looks very interesting. Glad you took a break. The garden will always wait even if it does throw up a few weeds in protest.

Looks like fun! I've only ever seen the coast of lake Erie from the beach and "space needle" at Cedar Point...nice to get another perspective. Is the water really warm at that beach? From what I understand, Erie is the shallowest and warmest of the great lakes, and at Cedar Point it was like bath water! (And no, not just where I was standing! ;-)

It was so nice to see a little bit of home again - when I lived there for so many years...you tend to take the Lake for granted. I now live on the edge of the Atwood Lake region. Nice photos! Glad you enjoyed your weekend!

Yes, me again!...you mentioned your humble home compared to the Gold coast homes...I'd take your average home in Lakewood over any of the mansions! I've always enjoyed my trips to Lakewood(helped open the Aristocrat Lakewood Retirement Community),Lakewood is known for its' charming, quaint and home-y feel!

I enjoy the looks around Lake Erie too...and the vollyball looks like a fun way to spend non-gardening time. I used to love vollyball, indoor and sand, but after a knee injury it would not be the same...just can't move that fast!

What? You do other things besides garden? ;)
I can see why you love Whiskey Island. Beach Volleyball and beautiful views of sun sparkling on water sounds like loads of fun.
We've just had our annual renaissance fair here too. I'd like to try archery and those other activities too. I might be a bit dangerous though :)