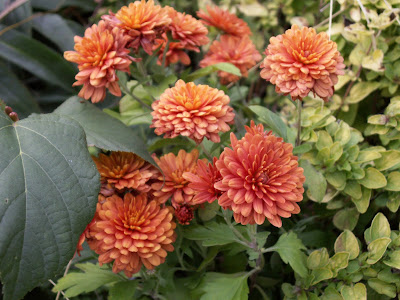 Can we file this one under "Better late than never?"  I missed last week's Garden Bloggers' Bloom Day (hosted by the lovely Carol, of May Dreams Gardens) because I was so busy at work.  As per its usual, the garden went on blooming... not even noticing the absence of its gardener, or so it seems.  While I try not to pout about that too much, let's show the blooming highlights from October: 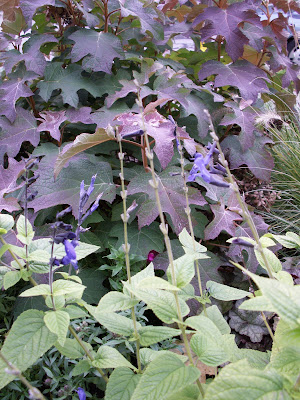 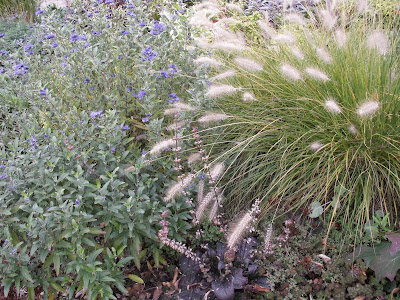 Caryopteris and 'Hameln' in bloom above, with the spent flowers of 'Purple Knockout' salvia lyrata and 'Voodoo' sedum below. 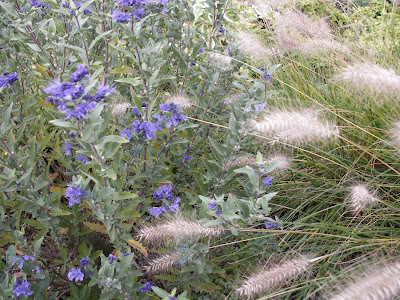 A closeup of the mingling of caryopteris and 'Hameln'... both rather fine and frothy, but I like them together anyway. 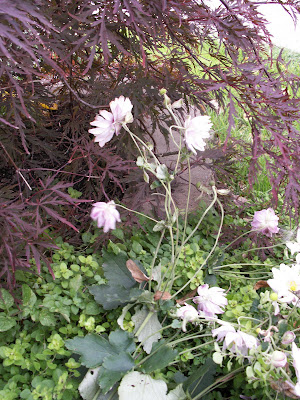 My 'Party Dress' is falling down... what a faux pas! Luckily, it looks good against the golden oregano and Japanese maple leaves. 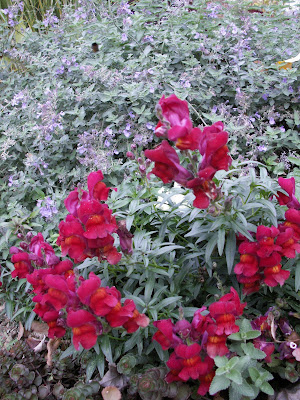 Red snapdragons are my favorite--so velvety and rich, especially against this unnamed (but probably 'Walker's Low') catmint. 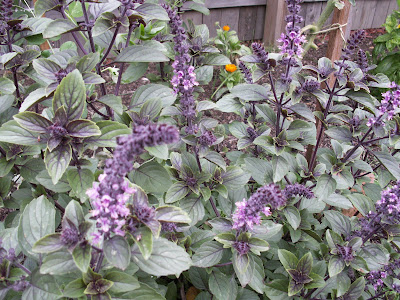 In the backyard, there are a few surprises.  'Blue Balsam' basil is supposed to be one of the most cold-tolerant, and is so far living up to its reputation. (It's been tested by a few nights in the upper 30s!) Observant herb lovers will notice a few orange calendula blooms in the background here, too. 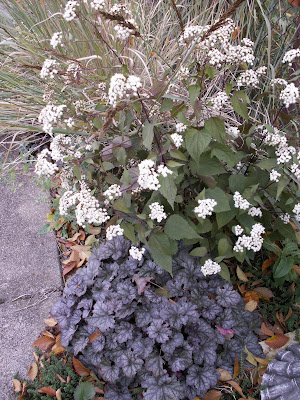 Chocolate eupatorium, being overrun by the sprawling 'Sioux Blue' indiangrass, sorghastrum nutens. My gypsy heuchera, 'Regina' is nestled at its feet. 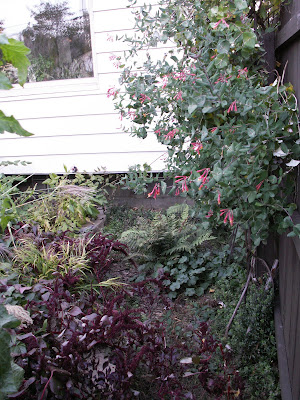 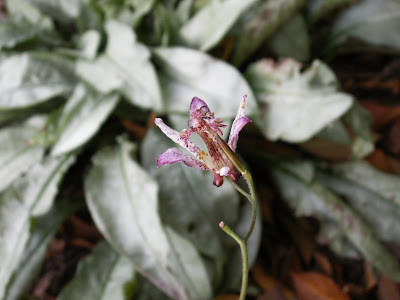 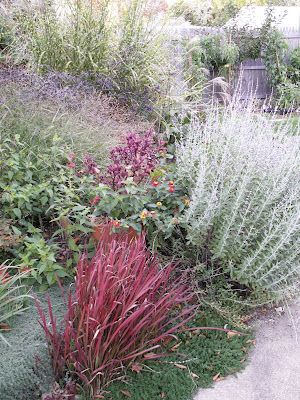 An overview of the back bed, including the flowers and seedheads of panicum virgatum 'Rotstrahlbusch,' Russian sage, pineapple sage, zebra grass, and the amazing lantana that keeps on blooming in the clay tile planter.


Other things in bloom here still include:

two other kinds of basil

a couple of peppers and tomatoes (crazy!)

'Sun Power' hosta (which has a lightly sweet scent)

To see what else is blooming around the world, visit Carol's post via the link above.  And now that my crazy work month is almost over, I promise to return to my regularly scheduled posting soon.  :)

It's official: you're the Queen of Contrast! Your garden looks great in October Kim, really gorgeous and colourful. Any fool(within reason) can have a lovely garden during Summer but in Autumn? ;-)

As you say, better late than never. You have lots in bloom. I always like to see your combinations. That fern sounds interesting too.

Wow, I like the Blue Balsam basil. What's the fragrance like? All my culinary basils started to show cold damage a couple of weeks ago when the low temp was around 40.

Aww... thanks, Yolanda Elizabet! I think that autumn is much easier (for me, anyway) than summer because things slow down and are less likely to get away from me. lol.

Greenbow Lisa, isn't that a great name? I picked it up at a now-defunct local nursery that had a bunch of oddball perennials--tiarellas before they became fashionable, etc.--and it was supposed to be the fern that dealt the best with drought while not being a crazy spreader. 5 years later, that's still true. :)

Entangled, it's a pretty camphor-intense basil. In fact, some people don't like it for just that reason, but I do. Especially since the cold tolerance is pretty good with this one--my 'Mammoth' and 'Genovese' started showing cold damage already, too. 'Red Rubin' is showing medium tolerance (just a little damage) and 'Siam Queen' thai basil just a bit. But you'd think it was summer the way that this one looks!

Oh, and I should have said that it's not a very "sweet" basil, either. I think because the camphor is so intense. But still delicious--I just use less of it. :)

You've changed you header again, and your design looks smashing. I never know how you can bear to change it, but then you come up with something equally good.

Your garden looks great too. So much in bloom still!

There is certainly still lots going on here! Are the first few photos in the front bed? It looks like it must have really filled in...doubt the mail carrier would walk through there now :)

Your garden still looks wonderful despite the cold we have had. The Basal is so pretty.Just have to get one of those Chocolate Joe Pyes next Spring. And the list has already started ;-)My Party Dress is droopy too. This is the first year for it . I hope it is not like that all of the time? I love the blooms though.Enjoy our mini heat wave ;-)

Your garden is still lovely. How do you do it? You must still be watering. Really lovely.

Mine has pretty much come to a halt although I have a little dianthus and my echinacea still has blooms. I also have a nice crop of black eyed Susand still blooming.

Thanks for these lovely photos.

Thanks, Pam/Digging! I am not sure whether I like it now on all screens (but I like it on my Mac)... I just like to play with the header, I admit it. I probably need to keep some consistency for a while, but... :)

Leslie, yes! The front bed has maybe filled in a little TOO well, in fact. (Okay, really, the gardener planted things too close!) I need to move the 'Hameln' next spring for sure--this caryopteris turns out NOT to be the tiny 'Petit Bleu' as advertised. lol.

Hocking Hills Gardener, just beware that I've been advised that the Chocolate eupatorium do sow rampantly for some people! 'Party Dress' has been droopy for me every year, unfortunately... maybe staking/hooping is the answer? I usually just use it as a cut flower, and leave the upright singles to wave in the garden instead.

NO watering here, Coneflower! The front yard doesn't get any supplemental watering now that the purple ninebark has settled in--I only water new shrubs/perennials there, and annuals for the first month they're in. The edibles do get some water, but I don't think I've pulled the hose out since mid September when I put a bunch of stuff in a kiddie pool while I was gone for a week. I practice "tough love" in the garden, I guess!

At this time of year, the autumnal foliage nearly upstages the flowers. The poor Salvia is definitely upstaged by the Hydrangea quercifolia, while the Japanese Maple makes the perfect foil for the Anemone. Thanks for including the long shot of the back garden. It has such great textures.

Great mums--and I am not usually a fan!

great color, as always. I missed the 15th, too. will have to look for that blue balsam basil.

Such a cornucopia of delights...wonderful dreamy colours... :)

Better late than never works well for me :)
Hannah is beautiful!
So many plants and combos to love here!
The snaps and catmint are lovely together. Must try that.
Love the Oakleaf Hydrangea leaf color! And that Basil.I lost my 2 basils to early frost. Live and learn! (first time growing it).
I enjoyed your Late October Color post too, The backlit Ninebark is spectacular!
I hope we get to enjoy a few glorious golden days in which to check off some more of those fall chores that seem so hard to accomplish!