So here's a quick list of what I SHOULD have been doing this past weekend:
And here's a hint as to what I did instead: 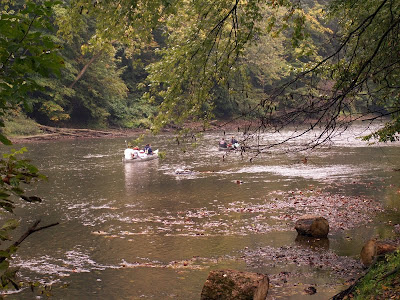 This weekend, Steve and I joined one of our volleyball teammates, his girlfriend, and 6 of their friends on a 2-night camping trip to Mohican Reservation.  We shared some campfires, a few spirits, many hamburgers and cheese brats, and millions of raindrops.  In spite of the rain, we had a good time... yes, even when yours truly managed to tip over one of these: 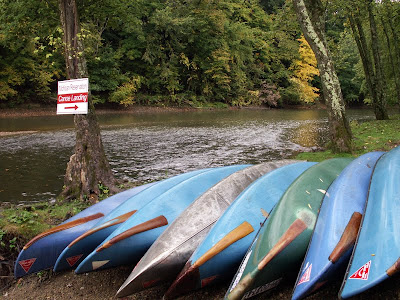 In my defense, it was my very first canoe trip ever and I HAD managed to "pilot" us through a few rocks before we went right over top of the big one.  (I didn't even see that rock, honestly, until it was too late.)  On the bright side, the boat didn't crack and start to take on water a la the Titanic... and Steve had been through about a dozen canoe trips without capsizing once, so I'm happy that I was able to help him out with a new canoeing experience!  ;)

Between the canoe trip and the raindrops, it was hard to capture many photos for posterity.  But I did get some cool ones early Saturday afternoon, when Steve and I ventured off for a walk down the river. Here are some highlights: 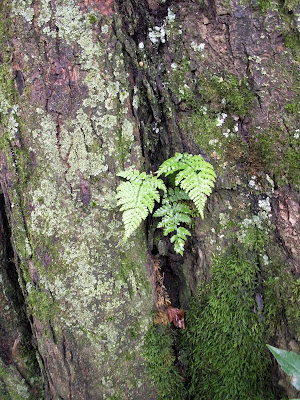 Fern growing in a cracked tree trunk along the riverbank. 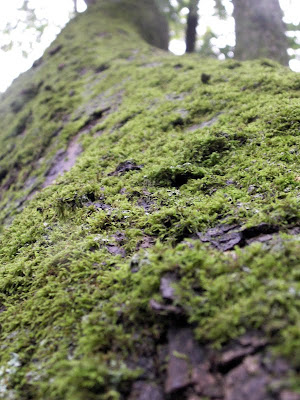 Fun photo of moss growing on a tree 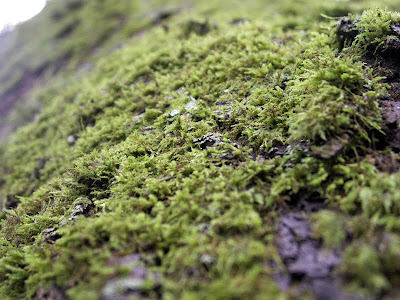 Speaking of moss growing on a tree, isn't that (or maybe lichen?) supposed to grow only on the north side of a tree?  Both seemed to be growing on all sides of the trees scattered along the Mohican River. 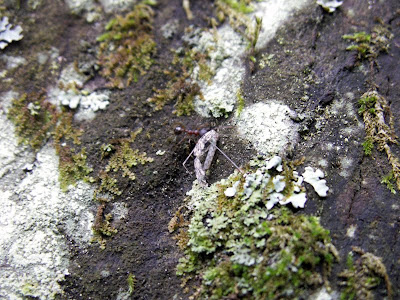 Lichen-encrusted tree, with an ant.  Steve noticed him and we both admired his industriousness--it seemed like a lot of work for him to be carrying that fly carcass, and he was fairly high up the tree.  (Almost at eye level!) 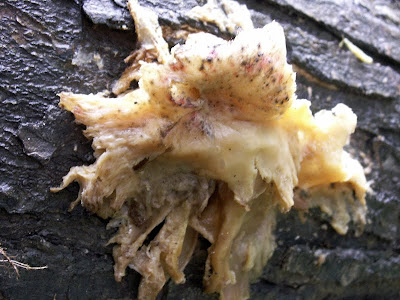 Cool-looking fungus of some sort. It was so close to the shore that it reminded me of a creature that might jump back into the water at any time. 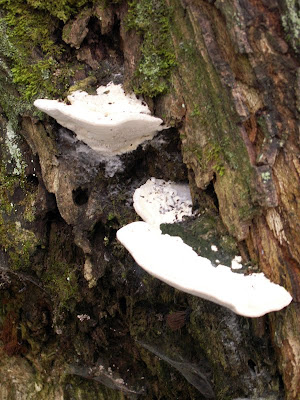 Shelf fungus. There were many of these scattered around in the trees. The largest one--which we just couldn't get a good picture of, because of the lighting--was about 9ft up in one tree, and about the size of half of a serving platter. 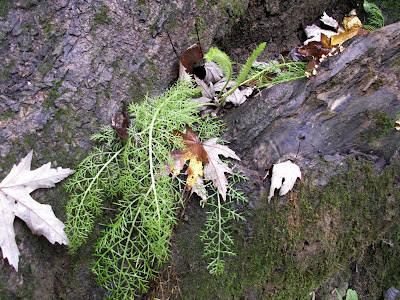 I assume this is some kind of a fern growing in this tree crotch--it's so pretty and airy, and I love that it seemed to "capture" the maple leave.  Can anyone give me an ID on the fern?

A few people were fishing in one of the many shallow areas as we started our walk.  When we came back toward the campsite they were gone so we walked down toward the bank they had vacated.  While investigating the river more closely there, we discovered that they--or someone who visited before them--had created an artistic arrangement of rocks on this log: 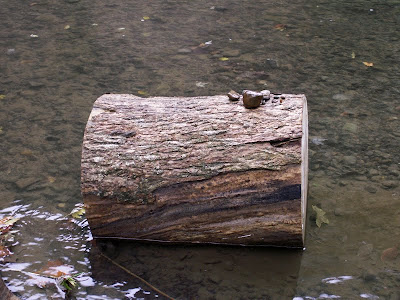 And then I amused myself for a few minutes, trying to capture on film (or should I say on computer chip?) one of the many leaves that were floating down the river: 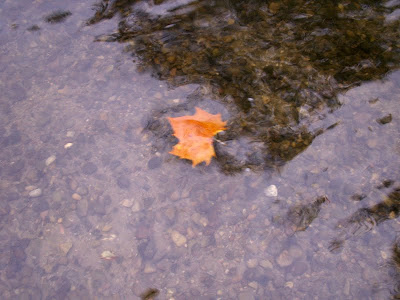 "Leaf in Water" photo, attempt 1. Fairly well centered, but too far away. 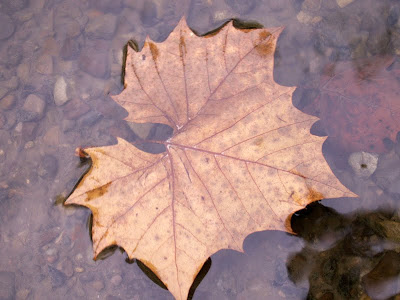 "Leaf in Water" photo, attempt 2. Now THIS is better... nevermind that I had to "cheat"--by taking a photo of a leaf that wasn't actually moving in the water--in order to get such a good close-up!

The only bad thing about having fun and ignoring your "To Do" list is that it doesn't magically get shorter while you're away.  So all of those items still need to be done--and the undone table-painting came back to bite me last night when I had to bring in all of my houseplants as the temperatures dropped.  Boo.

So maybe I'll get a few things crossed off of my list this weekend instead... that is, if nothing more exciting comes up in the meantime.  :)  Have a great weekend, everyone!

Sometimes you just need to hang (or row) with your buds. It made for a great & memorable experience. The chores didn't go anywhere & are still waiting for you.
I love your mossy photos. Such great texture.

Ah heck those chores will wait for you. It is best to take advantage of the good times that come along. This looks like it was a fantastic trip, not to be missed. Those plants don't care if their stand is painted or not. Now that you have been baptized maybe it won't happen again. tee hee... How did you keep your camera dry through all that water? Love the pictures. The photo of the frilly fern looks to me like a small start of bronze fennel, but how would it get out to the rivers edge? The trees must have plenty of moisture all the time to get lichen and moss to grow all over them. Such a fun time.

Ferns and fungus -- I love them too!

We went camping too, even though I had so much left to harvest and put up for the winter. It was a good time even though it rained all the first day, a wind storm kicked up the next (knocking down quite a few trees! Luckily none at our site), and on the day we were to leave it was beautiful and perfect.

When we got home that night I should have pulled all the basil left in the garden, but it was late and I was too lazy -- and I ended up loosing it all to the first frost of the season that night. Surprisingly my pepper plants didn't even seem to notice the frost!

Thanks, Mr McGregor's Daughter... I couldn't get enough of all of that texture, either. So I took LOTS of moss-and-bark photos!

Greenbow Lisa, I only took the camera out of the car during this walk, actually. Thankfully, I left it there for the canoe trip, too... I thought I would be fine bringing it, but decided that there was enough of a chance of getting wet that I really shouldn't. WHEW! :)

I can see why you think it might be fennel, by the way, but I somehow was smart enough to try to smell it, and there wasn't much of a scent outside of "generic green plant smell," so it couldn't have been fennel. Maybe something in that family, though? Hmm...

Sylvana, glad to hear that your peppers are still going, at least! I got soooo lucky Wednesday night, and escaped the frost. I was very happy to see my basil, tomatoes, etc., still intact last night when I got home from work... since I had completely forgotten to pick it before I went to bed Wednesday.

Sounds like your camping trip was even more of a crazy experience than ours, by the way. More than one time, I mentioned that I was happy there was no wind, and no lightning! (Yikes!)

Kim, I'm glad the weather didn't spoil your trip. Sounds like a really fun time...except for the dunking :)
We've had rain and drab skies for 7 days now. Enough already!
Those chore will get done eventually...one at a time...so don't fret!
Love that first photo. It looks so peaceful.

Kerri, I agree! I'm tired of this rain--it's bad enough that it's getting cooler so quickly, without all of the rain and gloom, too. :(

Seize the day! So glad you had fun! The chores can wait, life cannot. Sorry you got wet but you got that experience out of the way.

Hilarious! I've canoed quite a bit - and remember one trip after college when about 10 of us were floating down the Shenandoah River and a quiet, slow day - and a friend was in another canoe, laying down reading a book - and the other person in the canoe honest-to-God fell asleep and before anyone noticed they had turned the canoe sideways and they tumbled in the water - we were on a five day trip and their canoe had all of the canned goods! We tried to rescue as much of the food as we could, but did lose about half of it...

Your post made me think about all of the time I spent canoeing Michigan rivers - I miss those days. My canoe was traded for a kayak with a rudder for coastal kayaking (so I can't complain too much).

As someone who puts off such garden chores regularly, there's always next weekend!

Sounds like a perfect weekend, dear Kim, and just what you needed to feed your soul. I've tipped in many a canoe, caught in hail storms, and lost many valuables (thank goodness, not my kids though have had to rescue them :) It's the lucky person who unwraps the gift of a day!

Hi, yes I can send seeds to the states. Email me. BTW: I love the photography of the woods, beautiful.

Love your trip to the Mohican area with all the beautiful mosses and lichens... :)

I think you made the right choice--quality time with nature and loved ones instead of chores. Love your new header (new to me anyway).

A lovely send-off to summer.

The chores or similar ones will always be there. I think you made a great choice. It sounds like it was a lovely weekend: rain, dunking and all!