And a Cool Foliage Follow-Up

I had planned to continue the purple theme today (I definitely have enough of it in my garden!) but while strolling around with the camera near nightfall, the blues caught my eye instead: 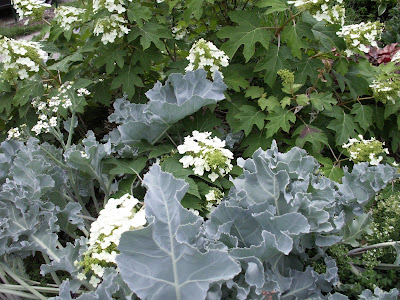 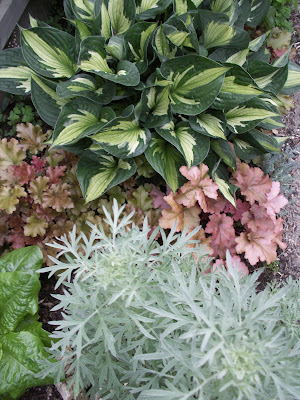 The bluish silver of an unnamed artemisia (similar to a 'Powis Castle') that will soon grow to meet the hosta leaves over the peachy heuchera. (That's a lettuce to the left, "behind" in terms of sunshine, that will be harvested before the artemisia gets much bigger.) 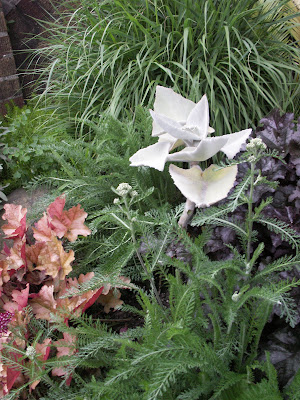 Silvery and fuzzy, the kalanchoe brings out the cooler tones in the achillea and heuchera leaves, and plays off of the achillea buds, too.  I had left the pot in this spot last year, but this summer I just went ahead and planted it here, to see what would happen over the growing season. 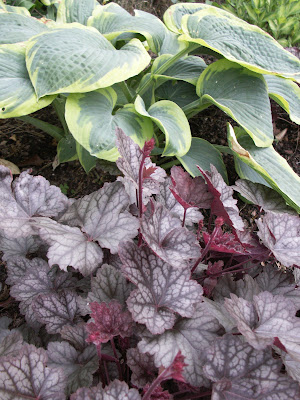 This time, it's the silvery leaves of 'Frosted Violet' heuchera that are bringing out the blue tones in the nearby, unnamed hosta. 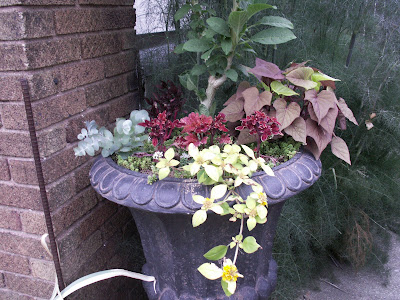 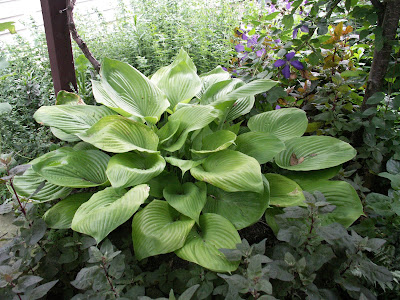 When can gold take on shades of blue?  When you surround a 'Sum and Substance' (I believe--but this is unconfirmed) hosta with ruby orach, silvery painted ferns, Greek oregano, and top it all off by painting the nearby arbor with a blue-hued burgundy stain!

Hope you enjoyed my Foliage Follow-up for June 2010!  To see what's catching the eye of fellow foliage freaks around the world, visit Pam's Bloom Day & Foliage Follow Up post, and click through the comments.

Luscious, Kim! I envy you hosta growers. Your big 'Sum and Substance' has such a marvelous ribbed texture. And that blue-green sea kale leaf also caught my eye. Great combos, as always.

You have a wonderful eye for delightful companion plants, Kim (but you know that) :) June hugs for you, dear gardening friend.

Thanks, Pam! They aren't quite the agaves and manfredas that I drool over in your garden, but some of the hostas ARE pretty cool. My 'Sum and Substance' really is a monster, btw... those are 4x4 posts on the arbor, so that gives you an idea of how large just one leaf gets, by comparison.

I always like to see your foliage combos. Just the best.

And Julie thinks your dog is beautiful.

So far agaves have never made me drool the way your hostas do, Kim- and the kalanchoe is a silver delight.

Your foliage is always a treat - I'm envious of the 'northern' hostas - boy, gorgeous. And that sea blue kale! That is my favorite.

(I love Pam's/Digging's agaves too).

As always, I'm wicked envious of your combinations. And you're so right about the color shift in sum and substance. It needs the right companions to bring out the best in it and I'm going to have to re-look at who's hanging out with ours...

Very nice follow-up indeed. Perhaps I will get my act together next month and join you, as it was I felt lucky I got a GBBD post up. . .

I was heartened to read that you had an "unnamed" hosta. Thank goodness I am not the only dilatory garden blogger out there who forgets to write stuff down. I have more unnamed hostas than I care to admit. . . But they are so beautiful I just enjoy them.

And Sum and Substance certainly does get to be a monstrous plant, just like Blue Angel does. Fantastic sights both of them, when they really reach their prime.

Thank you, Greenbow Lisa, Ruth--and Julie! (Julie, I agree, Coco IS beautiful... even more so now that she's got these old-dog silver eyelashes to go with her white markings! We should all age so gracefully... :)

Annie, a silver delight it definitely is! I love the fuzzy leaves, too. I'm hoping that it's happy enough being out of that 4" pot in which it has been tortured for the past two years, that it gives me many more leaves to try to root in the fall.

Microbial Lab Goddess Pam, the sea kale is my favorite, too! (But... *ahem*... it still isn't one of your lovely camellias. *sigh*) The white flowers are fragrant, even... some plants just have it all.

Blithewold Kris, very funny that we are jealous of each others' combinations! Ah, if only we could be neighbors... :)

healingmagichands, I SO want a 'Blue Angel'--love that big, beautiful foliage! Alas, I have no place to put it. Boo.

Oh, and about those hosta... I'm pretty good at picking up hostas that are normally $26 and up at the end-of-the-season sale for $4 or so. The only problem is that by then, the tags are almost always gone by that time... so I'm left saying, "Well, I know that when 'June' came in, it was priced at $27.99, so maybe this is June..." So IN ADDITION to being really good at losing plant tags, I take too many chances on my "finds"!!! :-D

What, are their no snails in your garden? Some electromagnetic field? Your Crambe maritima is pristine! And I bought one little hosta, potted it, placed it high on a table, and the snails found it. Your plants are gorgeous, simply wonderful.

Denise, I have TONS of slugs! I don't know what they eat, but I assume it must be the undergrowth of my garden jungle or something, because I never see any damage. And the stupid cabbage whites keep eating my cabbage and brussels sprouts instead--probably because I'd RATHER they eat my decorative stuff! lol.

The artemesia and peachy heuchera is my favorite combo. So pretty and soothing.