Usually, form and function are thought of as being mutually exclusive in the garden--unless you're talking about one of those gorgeous, elaborately planned kitchen potager gardens that the French do so well. But a few things came together this week to make me think more about form and function working together.

The first puzzle piece was a photo I took of this part of the garden: 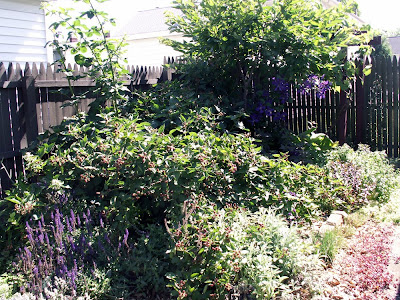 Looking at the photos while I was posting, I realized that the reason I don't love this little part of the garden more is that it needs some chunky texture at the entrance (above) to liven it up.  Maybe the 'Sagae' hosta that is now all but hidden behind the salvia and underneath the blackberry at left.  Maybe the trashpicked soon-to-be gazing ball.  I don't know, but it needs something.

Once you get into that area, the view gets better.  'Sum & Substance adds some chunky relief.  "Probably Jackman" clematis pops in some beautiful purple color as it hangs off the cherry tree... 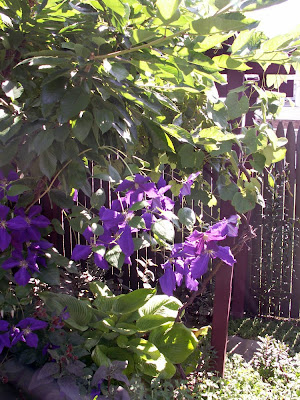 ... and rambles along the ground, amid the blackberries and plumbago: 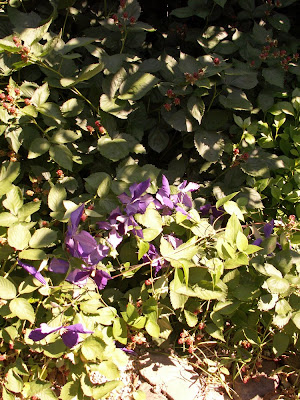 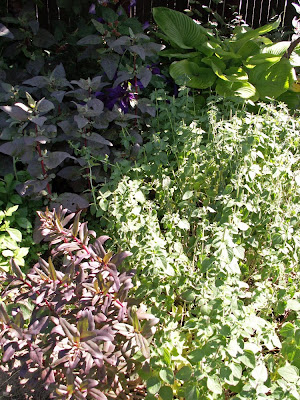 Inside the arbor are flat, spaced stones that provide some good textural contrast with ghost ferns, and even with the self-sown ruby orach.  But the entrance garden has no such relief.  Here's the ultimate proof of its boring-ness, the photo turned black and white: 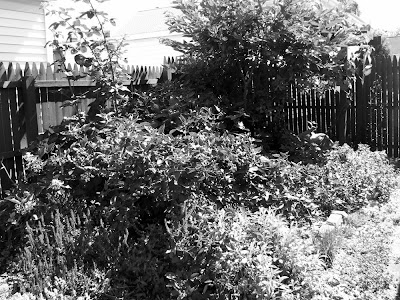 As I was thinking about how to make this area of fruit production a little bit more friendly in the eye-candy department, I opened my quotes of the day email and found some gems from Frank Lloyd Wright.  (Van does a nice job of selecting a daily theme, and emailing out appropriate quotes--you can check it out and sign up here if you're a fellow quote fiend.)  One quote in particular stood up and smacked me in the face:


"Form follows function - that has been misunderstood. Form and function should be one, joined in a spiritual union."
- Frank Lloyd Wright, 1867 - 1959
If Frank says so... who am I to argue, right?!  So I guess that mixing herbs and veggies into my landscaping isn't really so crazy after all?

Elsewhere in the garden, I think that I do okay with combining form and function while working my veggies into the landscaping.  Here, a tomato ('Great White') starts growing up past the chunky-textured 'Othello' ligularia, with a dark purple heuchera at its feet: 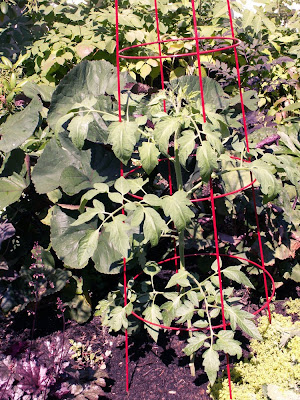 'Gretel' eggplant is just starting to settle in and take off, but you can see that she's going to be a nice bit of chunky relief to the grassy drumstick allium and the golden thyme that you can barely see behind the soon-to-be-harvested ruby orach: 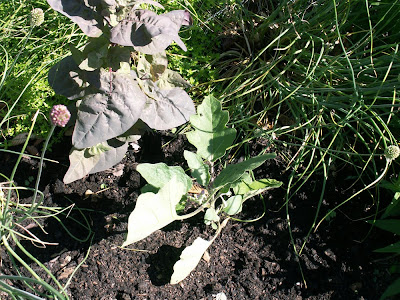 It adds little textural difference, but there is going to be a huge color and height difference once the 'Black Krim' tomato (lower left in the space--and as of yet without its cage) grows tall and starts to bear fruit: 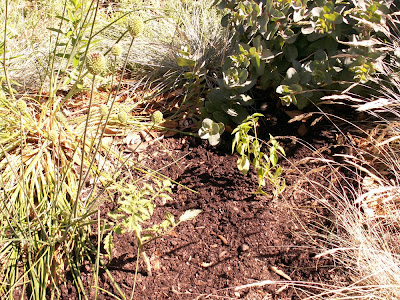 The chimney tiles themselves provide a chunk of solid color in the mostly-vegetable garden, as does the lady's mantle that appears in the oft-shaded area behind the one I'm showing below.  To the right is my recently thinned peach tree, and to the left you can barely make out the red tomato cage that I showed in the photo above: 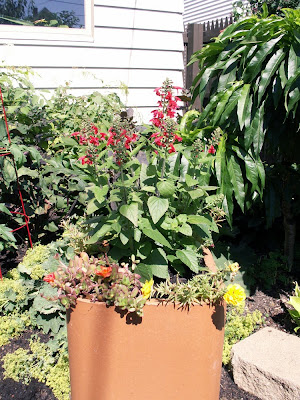 This year, it's planted with a hot red salvia, 'Scarlet' Yubi portulaca, and various other portulaca.  (chuck b., I'm with you--and I did NOT intentionally plant that yellow portulaca in there with the red! I thought I had grabbed all reds and oranges.  Boo!)

As I was pondering the above, I also came across an old blog post of mine in which I tried to find a cool terminology to describe my garden's design aesthetic.  And I thought about how, when asked this week, Steve described my garden as, "Eclectic... just like your house, and their owner!"  (I know, he says sweet things, no?)  Anyway, the phrase "Edible Eclectic" popped into my head, and it was one of those things that finally felt just right.

So from now on, any time that someone asks me what my garden design aesthetic is (because you know it comes up all the time in polite conversation--ha!) I am going to say:  "Edible Eclectic!"  And yes, I'll be prepared to explain...  :)
Posted by Unknown at 6:45 PM

I think you have come up with the perfect terminology to graphically explain your garden. Don't forget to add beautiful.

'Edible Eclectic' is good, Kim! You do a lovely job melding form & function ... pat yourself on the back! Happy Summer, dear gardening friend :)

I like it. EE for short? I haven't taken a black and white look in a while. Thanks for that reminder. It does help show the forms doesn't it?

Well this is a big part of my raison d'etre so it's nice to see more edibles incoporated into a gardening scheme. Some, like rhubarb, kale and many fruiting vines/bushes are an easy sell for sure. They are so beautiful.

What a well-coined phrase, 'edible eclectic'! Great idea to use a black & white photo to test drive the functionality of the garden design - like an Ansel Adams shot.

Seeing your tomatoes literally in the midst of perennials makes me rethink a few ideas for incorporating more edibles in my small garden...thank you!