It's a very purple Garden Bloggers' Bloom Day this year, led off by this rambling, unnamed (but probably Jackmanii) clematis that has a few blooms with six petals, and others with just four: 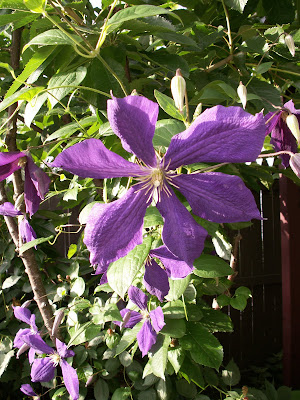 The original plan was to train the clematis on the branches of the dead 'Bing' cherry tree, but you can see the problem with that plan in this photo: 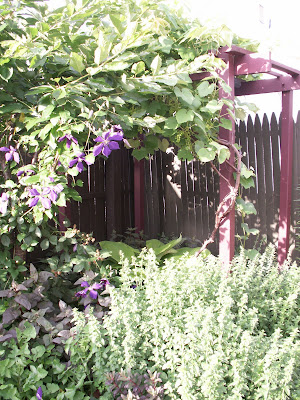 Yup, 'Bing' sprung back to life!  I haven't had time to de-leaf him yet this year, but I am definitely going to do so.  He's been nothing but trouble, and the nearby 'Concord' grape (on the arbor) and the blackberry (sprawling in front with their canes weighed down by a ridiculous amount of fruit) need his space anyway, as you can see in the photo below.  Also notice that the 'Newe Ya'ar' culinary sage and the 'Caradonna' salvia nemerosa are both pretty much done blooming already, along with the chive whose spent blooms are dragging on the ground by the sidewalk: 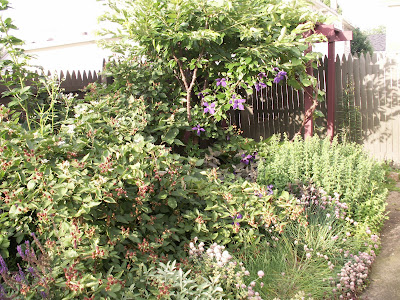 More signs of an early summer arrival can be found all around.  Like in the brazen blooms of verbena bonariensis, which last year was my starring bloom for August not June: 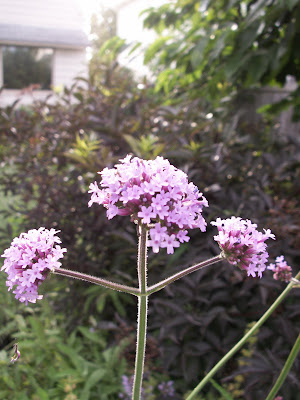 In fairness, it's not all purple in the garden this month.  I have a curious large proportion of whites flowering right now--curious because I don't particularly like white flowers.  But I love the oakleaf hydrangea, and this little 'Chubby Fingers' sedum album: 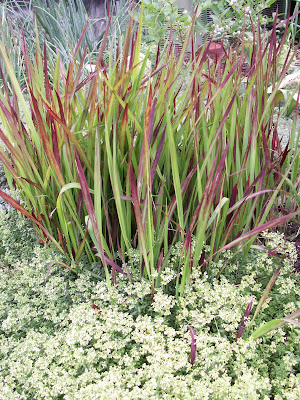 But really, the June show is all about the purple.  So here's one more photo of the lovely clematis before I get to the list: 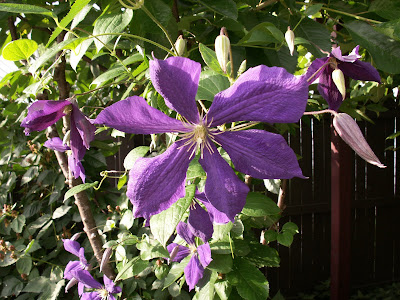 The rest of my official June 2010 bloom day list:

Shrubs, vines and tall grasses:  Oakleaf hydrangea, 'Albury Purple' St. John's Wort, lonicera sempervirens, the unnamed purple clematis, the blackberry (Yes, again. Really.  It's insane!)
Perennials:  'Caradonna' salvia, various thymes, 'Summerwine' achillea, 'Zweiweltenkind' goatsbeard, eryngium, 'Hidcote' lavender, digitalis parviflora, passalong lamium and dianthus, 'Purple Dragon' lamium, and various heucheras and hostas (until I see the stalks to cut them down!)
Annuals:  Outside of the 'Bonfire' begonias in hanging baskets and my veggie plants, only a few little portulacas have been allowed to bloom!  They are all so recently planted that I have been pinching out the blooms in order for the plants to put down good roots and get through the promised heat of summer.


That's all for this Bloom Day--for me, anyway!  To see what other colors abound in gardens around the world, visit the Garden Bloggers' Bloom Day Post for June 2010, hosted by Carol at May Dreams Gardens!
Posted by Unknown at 12:19 AM

Amazing clematis -- hope the overcrowding will sort itself out. Happy bloom day!

LINDA from EACH LITTLE WORLD said...

I keep trying to grow clematis up problem trees and all I seem to get is problem clematis. Enjoyed the fact that your images give views of the garden and not just plant close-ups!

I do love purple in the garden.

Your clematis is gorgeous! :)

I agree that your purple clematis looks like Jackmanii. Jack is blooming in my garden too.

I had some purple I didn't show! now I'm a little bit regretful! loved seeing your blooms. What do you do with your fruit?

Gardening in a Sandbox said...

Good luck with your clematis. Maybe the bing thinks he is helping LOL. Thanks for sharing your garden.

Hey, Kim...great name! :) Your purples are beautiful. It's one of my faves in the garden. I especially like your colored grass.

THIS is so cool, because I have all blues/purples today, too, but NONE of the same as yours. I LOVE the tall verbena! And the clematis. Clematis is not so happy in my garden. I keep killing it.

Beautiful clem. My fave would be the sedum and -- is it blood grass? What a lush, beautiful garden. Happy bloom day!

Makes you wonder what will be left to bloom in August. I'm with you about white flowers, although I do leave my Hosta flowers alone. It's too funny that this weather has caused a miraculous resurrection of the tree. Like Linda, I've had problems getting a Clematis to grow up a tree. My problem was the horrible wind we had in April and May, which broke the precociously growing stems. I have a much shorter plant now.
In your abundant spare time, you could try to ID your Clematis through Clematis on the Web's Clematis search function.

How strange that some things bloomed early given the late winter! I for one can't figure that kind of thing out. I love your clematis....I want one now!

Thanks, Town Mouse and Ruth! The clematis does look very good this year--the best it ever has. Maybe "Mr. Bing" is helping it out, as Gardening in a Sandbox suggested?! :-D

NellJean, I'm pretty sure I'll have some purples for Foliage Followup, too. I (heart) purple!

Greenbow Lisa, does your Jack have flowers with different numbers of petals on it? That "6 on some, 4 on most" thing is weirding me out a little bit...

Muum, this might be the first year that I have enough to make jam! In previous years, I just ate it... and went to U-Pick places to get enough fruits for canning. (Any recipes you want to recommend? I like to try new things...)

Kimberly, right back atcha! LOL. And thanks--I love that bloodgrass, too!

Katie, this is really the first year the clematis has looked like anything... I don't know how to explain it! But I can't wait to go see your blues and purples, too. Thanks for stopping by!

Denise, the sedum and bloodgrass (yup, you're correct!) is my favorite picture, too. You must be a fellow foliage/texture girl! :-) I almost saved that one for the Foliage Follow-Up tomorrow, but I couldn't resist...

Thanks for the link, MMGD! I leave a very few of my hosta flowers alone, but this year I also made a point to plant a few of the varieties that have fragrant flowers so I can use them in bouquets inside. That way, they won't completely go to waste.

Yeah, I wonder what will be left to bloom in August, too. But it makes me glad that my garden tends to come into its own in the fall!

Leslie, forget the clematis! You'll just have to "console yourself" with that GORGEOUS wisteria of yours instead. ;-)

Love your purple and green palette. And the clematis is lovely.

That red grass in the sea of white flowers is brilliant.

Sylvana, I adore that bloodgrass, although I hear that it can be invasive. I'm not sure whether my garden is just too dry, or I'm too far north, or what, but I seem to have no trouble with it at all. (And it's been here for 6 years now.)

I'll have to show you how good it looks with the woolly thyme spilling over the retaining wall, and the sedum cauticola coming out of the planting pockets inside the wall. That's my favorite! :)

That's the M.O. of all my plants. Leave them for dead, and when I have a plan for it, it springs to life.

I love that grass. Is it benikaze? I may have it. It's struggling on my back slope.

Great clematis! If every purple bloomer I planted lived and grew, all my GBBDays would be very purple, Kim - but so many die or bloom pink or wimp out.

Just a thought: Maybe the clematis really does enjoy being supported by a leafed-out Bing better than the bare branches? Those vine are so darned brittle! Could be the leafage cushions against small breaks when the wind snaps at the vines.

Zwieweltenkind? Love that you've stuffed that huge, frothy aruncus into the garden.