The crazy summer continues here, with our early spring warmup causing at least one big surprise for my August Garden Bloggers' Bloom Day: 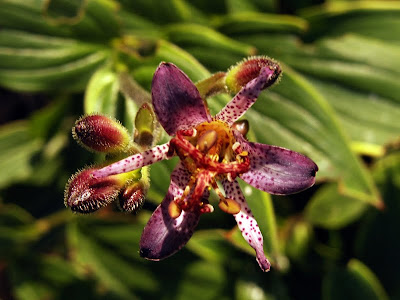 My toad lilies normally bloom in September... sometimes October... but NEVER (until now) in August!  I captured this first bloom on Thursday night around sundown, and more have followed.  They're beautiful--and frankly, I was happy to see this plant reemerge after a really tough, dry 2009--but definitely on an accelerated schedule. 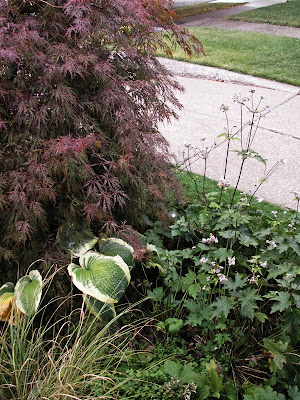 When I checked last year's GBBD post, I was surprised to see that this year's Japanese anemones, shown above, are at about the same fullness of bloom now as they were in 2009.  They started earlier, and it has been another tough, dry year, so I had expected them to be closer to "done," I guess. 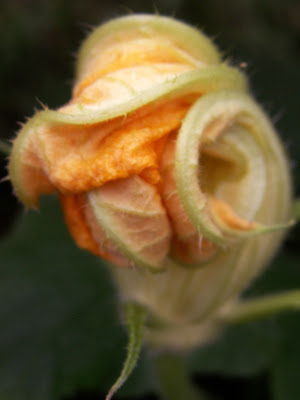 This 'Hopi Red Dye' amaranth--which is so tall, I have to crane my neck to take its photo: 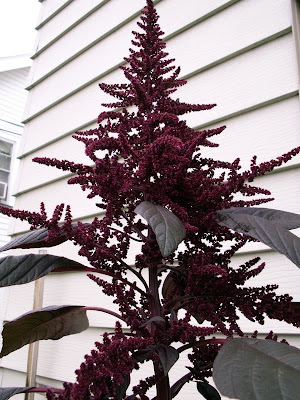 Orange butterfly weed, which I keep in bloom by deadheading it religiously: 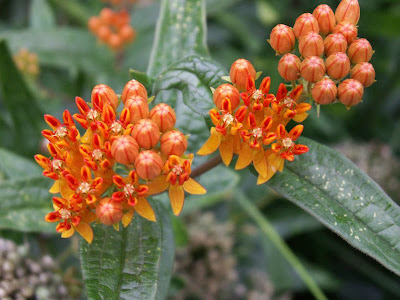 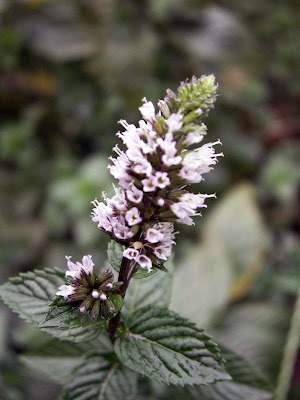 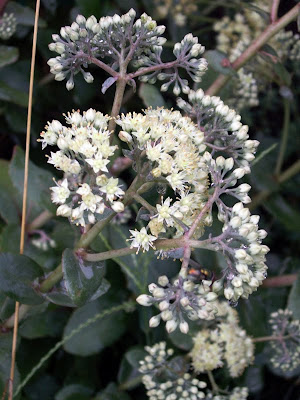 'Empress of India' nasturtiums, just beginning because they were sown so late: 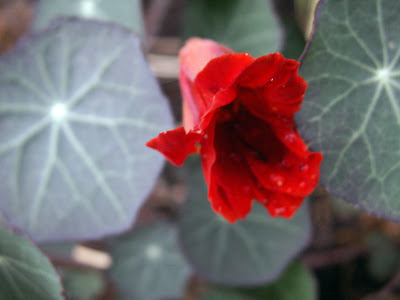 'Black and Blue' Salvia (with 'Acapulco' agastaches blooming in the background): 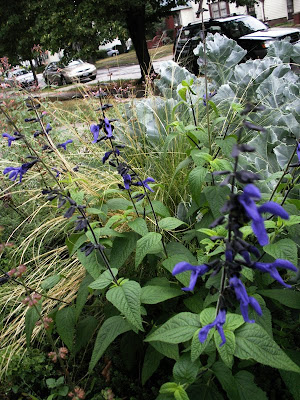 Pennisetum, with caryopteris just starting to bloom (at its tips) behind: 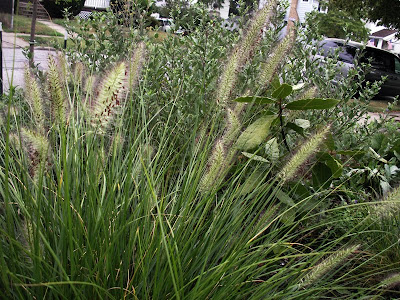 The Dragonwing begonia that I overwintered, then added to the mixed monstera container this summer: 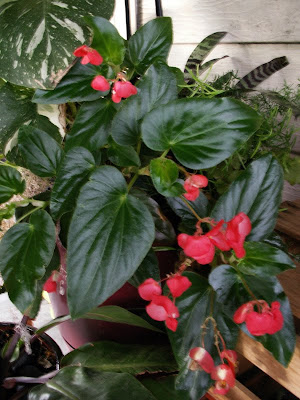 And a few more things, like self-sown red snapdragons and orange calendula, a few different thymes, a couple of hostas and heucheras I haven't gotten around to tidying up yet, 'Albury Purple' St. John's Wort, an abutilon, 'Vista Purple' salvia, Russian sage, hens & chicks, and bronze fennel... plus the annual red salvia and portulaca that I have in my clay tile planters. And of course, the tomatoes, peppers, eggplants, basils and oreganos are still blooming strongly, too.  (In spite of my best efforts to keep those last two in check!)


To see what else is blooming in gardens around the world today, visit Carol at May Dreams Gardens!

I keep returning to the other-worldly squash bud. Really cool. Veggie flowers are so underappreciated. And the amaranth is pretty cool too. Have you tried to eat the plant or the seeds? I've cooked with it before--pretty successful. But doing anything with the seeds was way too much work...

Really interesting perspective on the photographs. The squash blossom was a bit eerie, and the amaranth looked a little like Jack and the Beanstalk.
Happy Bloom Day from Niagara Falls, NY

James, I agree re: veggie flowers! And I was bummed that the squash blossom turned out so out-of-focus, until I realized how cool the picture looked.

I've eaten the amaranth leaves, sauteed in garlic and olive oil, but usually only when they're smallish. The bigger ones still taste good, but they can be tough--and by then, I usually have some other green ready to harvest, anyway. I'd love to use the seeds, but as you mentioned, they're a pain in the butt to deal with. I make myself feel better about wasting them by noting how many of the birds seem to love them when I hang the stalks upside down to dry.

gardenwalkgardentalk, thanks for stopping by. The amaranth really DOES look like Jack and the beanstalk! I've had 4-foot-plus amaranth before, but this one is already over my head. It's amazingly sturdy. :)

My amaranth is a wimp compared to your! Is it self-sown? Love the Empress nasturtium too, such a cool plant. Happy bloom day!

Your garden is early, my garden is late. It is a strange summer for weather, isn't it? I LOVE that toad lily!! Happy bloom day. :D

Your garden looks better than mine. I love the black and blue salvia. Mine didn't do well this year. Amaranth is so pretty, especially during fall. My white anemones aren't blooming yet. They do have buds but no blooms.
Happy GBBD.

Great variety of blooms - love the alternative colors in the Sedum and the Peppermint... -Shyrlene

I love the amaranth and the salvia with the texture of the agastache. Nice blooms!

Denise, yes, it is self-sown. (I think that I originally planteed them in... 2005 maybe?) This is the first year that I've had a plant this big--usually they are wimpier, or break off/topple well before they get to this height!

Kate, you guys are late, huh? We did have one late frost, but overall the temperatures were so high, so early, that it didn't really make a difference in the grand scheme.

Greenbow Lisa, maybe be a little patient with the Black & Blue. I swear it was just a week or two ago that I was looking at it and thinking, "Jeez... I would have thought that this would be ahead of schedule, but it's WAY behind this year!" Overnight, it just seems to have doubled in size and exploded in bloom.

Tufu Girl, thank you. :) Right next to the agastache is some bold-foliaged sea kale... it really kicks up the whole combination a notch, to have that contrast nearby.

Although I'm in zone 8b, it seems we have several plants in common. I have to admit though that it seems yours look a lot better than mine.

Wonderful collection ... your Toad Lily is just lovely. Loved your Amaranth and Salvia ... and that wonderful Pennisetum.

After seeing your toad lily, I'm anxious to take a look at mine in the morning! L

You reminded me that I need to replant Black & Blue salvia. Mine was sort of perennial until a couple of winters ago. And the hummingbirds love it too.

I too like to see veggie flowers included for GBBD (even though I didn't do it myself). I let some radishes bloom so I could save the seed, but the flowers were so pretty I cut them to bring indoors.

Interesting flowers! this is the first time I saw something like that. Wish I can also add them in my garden. Thanks!

Oh! I love those beautiful flowers so colorful. I also try to collect flowers and put it in a cute vase. I enjoyed reading your article. It makes a lot of sense. Thanks for sharing.