I have some old foliage to confess... and some new foliage to show off.  I wasn't sure which to feature in this post, so you're getting both!  First, let's get the confession out of the way: 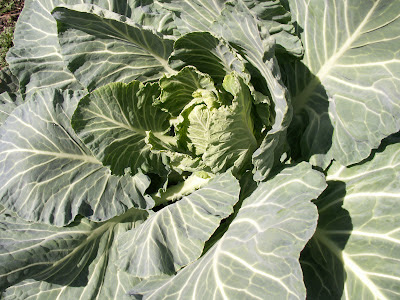 Veggie gardeners--and greens eaters--might think that these pretty leaves belong to a lovely bunch of collards. And that's because... they do! There are three of these babies out in my backyard right now, looking delicious and harvestable. (Just like they did this fall. OOPS.)

I think that I might try to harvest one and cook it in the next week or two. And leave at least one of the others to go to seed. Not really sure what to do about the third one, though--I guess that depends on how the cooking experiment goes? Anyway, now that my conscience feels a little bit lighter, lets move on to the pretty new foliage: 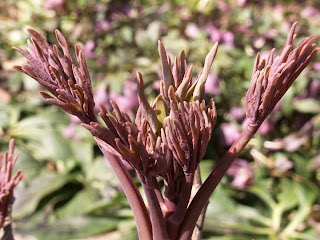 This is emerging foliage on the 'Chojuraku' tree peony that I salvaged at the garden center a couple of years ago. I'm going to try to transplant this over to my future mother-in-law's house this year. (Partly because I think that she would enjoy its big pink blooms... and partly because I suspect that whoever buys my house next year won't appreciate a tree peony nearly as much as they deserve to be appreciated! :-)

Want to look at even more pretty foliage?  Head over to Digging, and check out the links in the comments on Pam's March Foliage Follow-up Post!

I happened onto your site. It is lovely and your dog looks so sweet. I grow peonies as well but never have tried a tree peony. I live in the Southern part of Ohio and am loving this early spring.

Thanks for stopping by, Debbie! Coco IS a sweet girl...and sometimes, a total goof. Definitely a once-in-a-lifetime dog. (I checked out your blog... you could say she's my Sarge. :-)