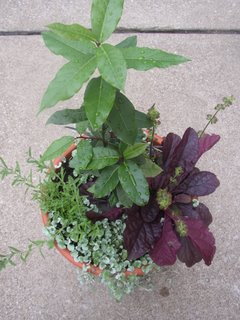 I love this container--it makes me wonder if I should "throw things together" more often, because it looks a whole lot better than most of my planned ones! I love the way the humble terracotta pot sets off the surprisingly sophisticated mix of foliage, too. Maybe I should just tell people that this one turned out exactly as I planned... who's going to know any different?

This container has a twin, and together they stand sentinel beside my side door. It's the entrance that I use 99% of the time, so I get to see these beauties on a daily basis. Here's what I have planted in each pot:

- One of the two bay laurels that outgrew their little 6in. pots in my kitchen this winter

- One dichondra "Silver Falls" that I found at a Home Depot, of all places, after looking for two weeks at smaller specialty garden centers 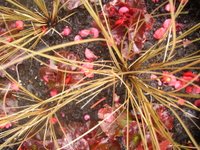 I originally put my carex buchannii (reddish/brown sedge, smaller picture) in this container, too, but moved it out to add a little color to the "Vodka" begonias I put in the huge urn planter that I got for my boyfriend. That's okay, though. Being able to mix reddish brown into that planter would probably have sent me over the edge of garden ecstasy anyway.

Part of what is so appealing about this container is its fleetingness, by the way, and not just because the dichondra is an annual. The salvia, lavender and black mondo grass will have to be planted out this fall and will be too large to share a container next year. I don't have room for this big pot inside so I'm going to have to repot the bay laurel into a smaller planter as well.

So I am already planning what to do as an encore... although maybe I'd be better off just waiting until the spring and winging it!
Posted by Unknown at 7:53 PM

I stopped planning my containers too. I like the wild sort of look and ended up getting much better results whne I just tossed together what is avaliable.

That dichondra looks nice. I always am surpriced where you can find that "one" plant you are looking for.

What's so pleasing about this container reminds me of your favourite spot photo a couple of posts ago, but a smaller version of it, of course.

I love it when something so pleasing is near the door so I get to see it several times a day.

When we first garden, we buy all kinds of stuff, but you have six years of experience now. Could this be the reason the container combinations work so well? Now that you know your garden self, you tend to gather only plants you really like. The more plants you own in your favorite colors or shapes, the better the chances for harmony.

Hanna, I love that dichondra, too. I've seen seeds for it somewhere--once I remember where, I'm going to buy them and see what I can WS for different spots next year.

Melissa, I went back to my "favorite spot" post, and by gosh you're right! I've been wondering what to add into that favorite spot to spice it up even more, so maybe the key is silver. Hmm.

Annie, that's a very good point. I subscribe to that idea when buying art/furnishings. I don't buy just one "style" or keep everything old or new in a certain room, but figure that everything I LIKE must fit in somehow. Makes total sense that I could do the same in the garden... and bodes well for future throw-togethers. :)

I fall in love with flowers, but I design with foliage first. The growth habit and leaves dominate the composition, especially in containers.

Thanks for the comment about the bulbs over on my blog. I just put up a new entry for you which shows one of the views from the tree fort.