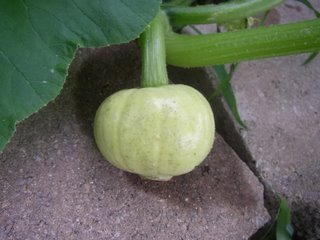 I was checking out some of my favorite blogs the other day when I happened upon some pictures posted on Dirt Sun Rain. As I looked at a picture of Steven's decimated zucchini vine and read the accompanying text, my heart sank. The squash vine borer damage he mentioned looked an awful lot like what I had seen on my own zucchini a week or so ago, before I pulled it.

My favorite reference for state-specific gardening information is OSU's "Ohioline" website. There they post Ohio State Extension Office "Fact Sheets" on various edible and ornamental plants, and their library is rather extensive. Ohioline was my first online stop, and of course the squash vine borer had merited its own fact sheet. As I suspected, pumpkins and other squash were similarly susceptible to this pest. 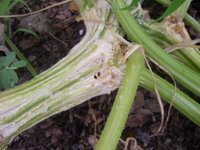 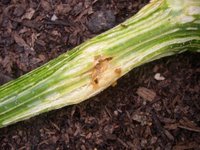 According to OSU, the moths themselves are active throughout most of June. They lay oval, flat, dull-red eggs that are about 1mm in diameter, and these eggs hatch into the larvae that bore into the squash vines. The entry holes are clearly visible, and I'm posting two examples of them here. Most of the entry holes have a "sawdust-like" ooze coming out of them, as the second picture shows. The two holes in the first picture are surprisingly clean, however. Maybe they're just older?

When I found these holes, and many others like them, I figured that my 'Jaradale' pumpkin vines were probably toast. Ohioline recommended a few different plans of physical and cultural attack for dealing with these pests in small gardens, but none of them would work for me at this point. So I decided to cut open the stem and have a look at the beastie within.

As I cut the vine, I saw him shrink away from the scissors. I cut again an inch or two behind him, and then peered into the chunk to see his face. I'm sorry to report that for something that had the audacity to ruin my plans to grow pumpkins for my boyfriend (for whom Halloween is like Christmas x100) he was distressingly unremarkable in appearance. I cut away the side of the stalk to get pictures of him all around, and you should be able to click on any of these to see them in larger size: 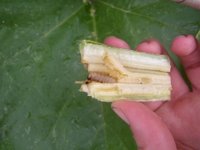 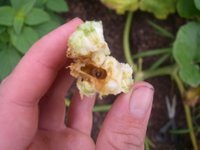 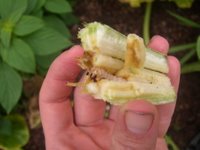 On the bright side, there are some steps that I can take next year to make sure that these guys don't thwart me out of my pumpkins and zukes... on the other hand, I'll be pulling out what's left of this poor pumpkin vine when I get home from volleyball this evening. *SIGH*
Posted by Unknown at 5:41 PM

Condolences, Blackswamp girl! We used to just keep burying the vines, gradually putting on soil close to the front where the fruit was being produced. We'd go out every few days to pile on more dirt and mulch. The plant would sent rootlets out under the mulch, and keep growing forward, while the old vine died behind it.

This technique would have worked, but the dang tree rats took one bite out of each squash. Maybe the only reason the pioneers didn't starve was because they ate squirrels.

lol re: the squirrels and the pioneers. Maybe they also got some satisfaction out of boiling the little squash-stealers!

That was the main suggestion they had--to pile moist dirt at various vine joints to encourage the plant to put down more roots along the vine. Good to know that it would have worked for you if not for the squirrels, because I want to try it next year.

They also said that you could protect the vines with nylons stretched over them, but... well, I never wear pantyhose, so I can't see putting them on my pumpkin vines for pete's sake. :)

I'm crossing my fingers that the zucchinis are the only thing they've gotten to... the little %#@&$!

One of the most practical ways to deal with the little monsters on summer squash is to plant about 5 times as many plants as you would normally need to plant, and cover all but one or two with a mesh fabric, such as a commercial "floating row cover," to keep out the vine borer moth. After a couple of weeks, uncover the next one or two, and so on, to allow in the pollinating insects.

As the first, uncovered squash, wilt and die, promply remove them from the garden to keep the larvae from burrowing into the soil to pupate and become adults.