Good in Theory, That's Me

I sometimes think that my middle name should be "GoodInTheory" because that curse has followed me around for most of my life. Having good plans go awry happens to me often enough that you'd think I would learn my lesson... but that just hasn't happened yet. Latest example: The Willow Tree 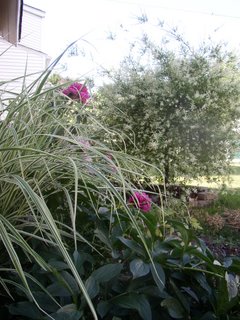 I inherited this variegated "dwarf" willow when I bought the house. After spending a summer getting smacked in the face by branches as I mowed--and wondering whether a machete would more efficiently hack back the limbs that constantly shot up around the phone line 15ft overhead--I decided it had to go.

This spring, I attacked the boring retaining wall bed surrounding the willow tree, taking out sections and blending the original bed into the new beds in front of it. Then I turned my attention to the willow, removing the smallest trailing branches first and methodically stacking them for kindling.

By the time I got down to just the trunk and a few shortened limbs, I was starting to admire the sculptural effect. "Maybe I could leave it as a focal point," I thought to myself. Then reason kicked in: "No, it's a willow. It will just keep sending up shoots and drive me crazy." So I pressed on until I was left with just a trunk and small limb stumps. 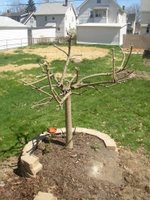 At that point, my friend Amy stopped by. As we chatted, we messed around with the willow trunk... and discovered that the bark came off easily. And that it was fun to peel, like a sunburn. Heaven knows what the neighbors thought as they watched two women in their late 20s (okay, okay, so I'm 30) gleefully peeling bark from a tree, but it didn't take us too long to completely de-bark the willow. Rain drove us inside shortly thereafter, and I ended up having a couple of days to look at the nude tree before I could get back out to it.

Extra time to think... therein lies the danger! By the time I got back to the willow tree project, I had convinced myself that since we stripped the willow of its bark the tree would be rendered fairly helpless. I plotted to further ensure its demise by painting it a nice sculptural color (the red stain didn't look right, so that was covered with grey paint) and driving nails into it. 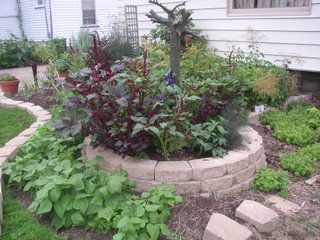 Lest you think I'm a brute, I have to point out that the nails had a legitimate purpose. They were to serve as the support for a purple clematis (probably a jackmanii) that I had moved here from the old house. I envisioned the willow trunk hosting a tower of purple blooms in the summer and providing an interesting piece of garden sculpture in the winter. As you can see from the single purple bloom at the base of the grey-painted trunk here, my plans were working perfectly.

Perfectly, that is, until the willow started throwing out shoots. Many of them. From every spot near the base of the trunk where I had not sealed it with paint. They shot through the hellebores, made a nice base of light green to show off the red amaranth, and tangled themselves up in the poor clematis. 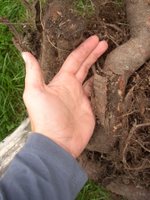 I resigned myself to the fact that this time, it really had to go. As soon as all of the amaranth were cut back, removal of the willow tree began again in earnest. On Monday after work I began to dig, cutting through roots almost as thick as my wrist with an old pruning saw as I worked my way around the tree. Dig... saw. Dig... saw.

I was so close to finishing the tree off that I could taste it. I rocked the trunk back and forth, throwing all my weight against it and then pulling it back with my arms. It felt like a loose tooth, so I moved 90 degrees to the left and started wiggling the tree again. Finally, the willow emitted a final gasp and fell limply to the side.

I would have preferred that it cracked and howled with defeat, but I was covered in sweat and mud and very tired. I would take my victory any way the willow wanted to hand it to me and just be thankful that I had managed not to fall down and bruise my tailbone during the battle royale. 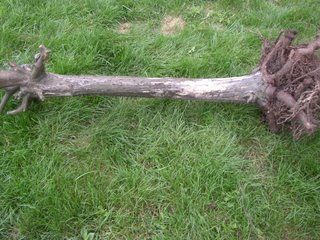 Wouldn't you know... at precisely that moment, as I basked in all my glory, I heard my boyfriend's car pull into the driveway. I suddenly realized that my jeans were covered in mud, and I probably smelled like a pig farmer from all of that earth and exertion. Rain was on its way, and chunks of hair curled and waved around my face Medusa-like. I was acutely aware of how ridiculous I looked as I triumphantly towered, shovel in hand, over the dead willow.

Needless to say, he exited the car with a smirk already on his face as he asked me if I was having fun. "Of course," I grinned. Then I needlessly pointed out: "See, I took out the willow tree!" Good sport that he is, he came over to brave the mess and give me a victory kiss. He even put up with me asking, "Guess what I did today," multiple times that night, and constantly humming the theme song to Rocky.

So the great trunk-as-sculpture experiment will go down in The History of Kim as yet another thing that was good in theory, not in practice. It's not quite as bad as the time I decided that since baby oil after a shower made my skin soft, it should do the same for my hair... but it did set that part of my garden back a little. Ah well, I enjoyed it while it lasted and might figure out a better way to incorporate tree corpses into the landscape someday.

(For the record, I was EIGHT when I came up with the brilliant baby oil scheme. My Mom, who will probably laugh at me for it all over again when she reads this, French braided my hair to hide the greasiness and save me from certain embarrassment at school as there was no time to rewash my hair. Thanks, Mom.)

Stay tuned... I plan to fill up the empty space sometime this week!
Posted by Unknown at 6:45 PM

It did look good in that third picture. Too bad about the shoots. At least they stayed in one place though (unlike staghorn sumac). Hope you can find a suitable replacement that has an equally sculptural effect in your garden.

I know exactly the feeling you're talking about, when you wrestle to get a big, knotted root ball out of the ground.

Your loose-tooth analogy is perfect... it seems like it's about to come loose, and then an HOUR later it finally gives! :)

Funny how that evil thing tried to keep it's hold...I have some barely hardy forsythias that do no more than suck nutrients and take up space, so they gotta go. Figured I'd do some digging and then connect the 4WD truck....

aww.. the poor willow. I had a willow tree when I was very young. I stuck a willow twig into the ground when I was 12. Then, 12 years later, my father had to cut the grown giant willow down, as it was digging its roots into our plumbing.
I haven't had another willow since then, until this year. But it's quite a-ways from my house, so hopefully it's fine.