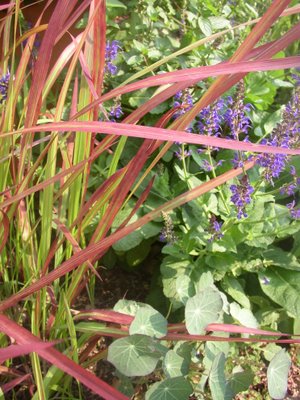 Cal Ripken played his last game exactly 5 years ago today, on October 6, 2001. He won so many awards--MVPs, Gold Gloves, Silver Sluggers--that it would take a whole post on a separate baseball blog to talk about them.

I was thinking about Cal today as I checked out my 'May Night' salvia. Cal is, of course, best known as baseball's "Iron Man" for playing in 2,632 straight games over 16 consecutive seasons.

'May Night' is known as a garden workhorse for its consecutive weeks in bloom... and it has been blooming in my garden now since the first week of June. I sometimes remember to deadhead it, and sometimes not. Doesn't seem to matter either way--'May Night' is still flashing its baby blues well into the fall with nary a complaint. Rather like a certain #8.
Posted by Unknown at 12:04 PM

In my garden (in Austin, Texas) May Night blooms for several months in the spring but goes dormant in the summer, even to the point of almost disappearing altogether, just a few withered leaves above ground. But a little cool weather and a rain or two and it's blooming again and will probably continue until we get a good freeze (which, around here, might be January — or November, you can never tell.

How interesting, Susan. Given the tough, sun-loving reputation that salvias in general have, I would never have guessed that it would go dormant in summer for you!

Would not guess you liked baseball?I love the iron horse tag, originally it was Lou Gehrig who played for sixteen seasons straight.Its good when plants show the same steeliness..which baseball team do you follow?

May Night didn't go dormant - it was great in IL but croaked for me here in TX. So far, it's Salvia guaranitica that is my equivalent of 'Cal'. Your analogy was very cool, Kim!

Annie, I think I'd take the salvia guaranitica instead of the 'May Night' without too much trouble! :) One of the new shopping centers up here has gorgeous landscaping and they used s.g. 'Black and Blue' in a lot of their huge containers... I've been drooling over it at every visit!

Snappy, I'm actually a HUGE baseball fan... I grew up about an hour south of Toledo, Ohio, and am a Detroit Tigers fan since we could watch the Tigers on the Toledo stations AND listen to the wonderful Ernie Harwell call games on the radio. He finally retired, but to me the sound of Ernie's voice coming through the radio is like a soundtrack for my childhood summers. :)

(I also like the Atlanta Braves and the Chicago Cubs, because those were the other teams we could see pre-ESPN, on national stations TBS and WGN.)

Very true re: Lou Gehrig... and apparently Cal has since assisted a number of charities that are involved in fighting Lou's disease, ALS, as a tribute to the man whose record he eclipsed. That's part of why I really like Ripken, even though I've never been an Orioles fan--he just really seems like a good all-around guy.

You seem to know a lot about baseball... do you follow Major League Baseball, yourself? Have any favorite teams?

May Nights seems like a flower I should have!

Carol, you should definitely get one. Or two. Or three. *grin* And if not, you might have to become "June Dreams" instead. ;)

Hi Blackswamp girl, knew you liked baseball.I used to listen to games on AFN (US armed forces network in Europe) who broadcast games at night from the States.I could pick it up at night on my radio. The signal was clear sometimes so you could hear the crowd, the umpires, and the bat hitting the baseball.The organ music playing to keep the crowd warm.Other times the signal dissapeared, coming and going..
I read a lot about Baseball history and the old hero's who are still remembered.I follow it though the sports pages on the internet.Will have to come with you to see the Detroit Tigers one day...
The AFN broadcast were a throwback to the old days of people listening on the wireless.
Like Bobby Thompsons shot heard around the world.I just read about it on Wikipedia.The giants win the pennant.
Thanks for replying to my comment blackswamp girl.Its not gardening either,lol!