Last year, I worked part time at a small local garden center. It was a fun place, with some interesting shrubs, native perennials and unique veggies amongst the more usual garden center suspects. People who wanted to know only where the black-eyed susans were--as well as those who sniffed their noses at those requesting such plebeian fare--were equally comfortable there.

One late spring day an older Asian woman came in and started asking questions of a young high schooler who had been hired mostly just to water plants. The poor girl looked thoroughly confused, and the older woman seemed to be getting agitated, so I casually walked by to see if I could help. 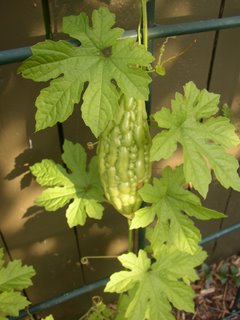 It took me a while to figure out what she wanted... but eventually I caught the words "bitter melon" and understood that she was looking for a vegetable she had purchased there the year before. I took her in to look at our supplier lists, as we frequently would add specialty plants to our orders at a customer's request... but unfortunately they were not available from the grower.

In spite of a few language barriers, she and I had a wonderful conversation about the bitter melon. It seemed to be an heirloom type vegetable and she assured me that it was commonly used in Asian cuisines. My curiosity was aroused enough that I decided to look into it sometime... but I admit that by the time I left, the words "bitter melon" had left my head entirely.

This spring, my friend Pete called me to ask about spring bulbs and the best time to plant annuals. Pete's family owns a wonderful restaurant that serves both Chinese and Vietnamese dishes (and a whole steamed fish that's to die for) and we ended up talking about food and growing our own vegetables.

Suddenly, my conversation with the older woman popped back into my head. "Hey Pete, last year there was this woman who came into the garden center looking for a certain Asian vegetable... I can't remember what it was called, but she said it was really bitter..."

Turns out that Pete's Mom grows it every year, but they call it bitter gourd. He promised me seeds but did one better by bringing over tiny seedlings in the early summer. Unfortunately the seeds had been started a little late because of our cool spring--and I didn't get them into the ground early enough, either. I ended up with just one bitter melon on my vines, but I did get to enjoy the gorgeous leaves and fairly neat growing habit of the plant itself. 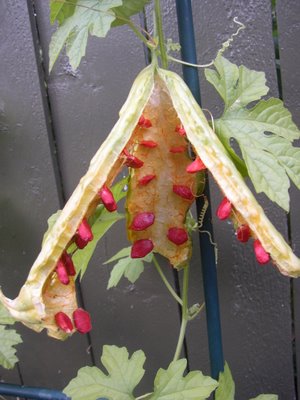 Pete offered me seeds again next year, but I decided to just let this one go to seed and try it myself. The seeds are a gorgeous red, and almost dry. When the fruit first split open they looked like huge, sticky pomegranate seeds. Pete says to leave them for a bit yet, but that they're almost ready to harvest.

When Pete figured out that I wasn't going to get any fruit from mine this year, he brought me over a quart of his Mom's homemade soup with bitter melon and pork. It's hard to describe how the bitter melon tasted... kind of bitter in the way that uncooked overgrown zucchini can be. The soup would have been kind of meaty and maybe even too greasy for my taste without the bitter melon to cut through it, but as it was it was really delicious. I can't wait to try this stuff in recipes--I'm thinking that it would be good with asiago cheese for some reason. (Yeah, okay, probably because I'm addicted to asiago cheese in general.)

If you go online and google bitter melon, you'll find a bunch of references to its supposedly "miraculous" medicinal properties. One site says that eating raw bitter melon every day can cure you of diabetes. Another touts it in pill form. Maybe they operate on the assumption that something so bitter and difficult to eat MUST be good for you?!

According to the National Bitter Melon Council, it has twice the potassium of a banana, twice the calcium of spinach, twice the beta-carotene of broccoli, is rich in iron, and offers a host of other vitamins as well. I'm not looking to live to be 150 or use it to cure an illness, though. I'll admit it: I just like to grow quirky produce every now and again. :)
Posted by Unknown at 6:58 PM

What a crazy looking melon/fruit! I just love it! I love that nature makes such wild and wacky looking plants!
I'd love to grow this plant, but probably Ireland' weather is too cool for this.

Very interesting~ I've never heard of this before.

Kim, one of our local bloggers wrote about this too - I'd never heard of it before. She also found the National Bitter Melon Council.
Rantomat on Bitter

You can buy Bitter Melon at one of our big grocery stores, but I had to read about it before this previously unknown fruit became visible to me. As to a recipe, your suggestion of Asiago was the best idea yet!

I love the foliage. What an interesting looking plant. I'm glad you wrote about it. I probably never would have heard of it otherwise.

The plant looks really handsome. I like the leaves. The seedpod is beautiful. This is a vine, yes? How high did it get in your garden?

I think it's hysterical that there's a whole "National Council" for this. The Web site is clearly operated by fan(atic)s.

Mmmmm... that sounds wonderful! Thanks for introducing me to a new veggie. :)

I saw a recipe calling for bitter melon...maybe in Sunset Magazine?...but had no idea what it was. The seeds are just beautiful! And being a kindred asiago cheese addict I just might be looking for seeds next year.

WOW!! Neat specimen! Gotta get me some of that!

Even though I have many Asian friends, I don't think I've actually tasted bitter melon. The picture of the fruit gone to seed is absolutely marvelous! Now I'll have to ask my friends for recipes, but will probably not find bitter melon unless I go in to Toronto...

rick, xris, and kati... and everyone else who went to the Bitter Melon site: Isn't it hysterical?!?! I still couldn't figure out why they picked the bitter melon to rally around, and the part about making the "Bitter Melon Seed Bomb" event just cracked me up. "We invite local community members to gather in grass-roots" infiltration of the social and vegetal ecosystem..." ROTFL!

Salix, I'm guessing that you're right--they are supposed to require a long growing season. :(

Karen, Xris and Lisa... it IS a beautiful vine. It got only about 4ft high on a rather flimsy heavy wire trellis and produced only one fruit in my garden, but keep in mind that it was planted late and you usually get more production from it. I'll give you all a better report after I grow it next summer.

christine, jlb and leslie, glad that you all enjoyed the post! I thought it was interesting too--like I said, I enjoy growing wacky veggies every now and again. :) (And Leslie, I would rather eat asiago than parmesan or any other similar cheese--YUM!)

I had seen bitter melons at the asian supermarket near my house, but I never knew (or would have guessed) that they went to seed in such a cool way. Thanks for sharing!

Hi Kim, how are you doing? I like the picture of the Bitter Melon with the red seeds showing. I love the story behind it too, just goes to show that everybody is like a book full of interesting stories to tell.

Hanna, you don't live near Asia Food Market, do you? That's on St. Clair, but I was thinking that you lived further east--University/Shaker Heights way--for some reason. (My friend Pete that I mentioned... his relatives own both Asia Food and the wonderful Siam Cafe. He works at the latter sometimes on weekends to help them out.)

UKBob, thanks for stopping by. I've been checking out your blog as well but every time I sit down to write a comment complimenting you on the lovely job you all did with Suzanne's bouquet I get interrupted! I hope to catch up this weekend when I finally have some time off of work.

Thanks for the link to this post. What cool seeds.

I got this crazy fruit or veggie that is growing on my bougenvilla..and it is Bitter Melon. I have so much of it that if anyone wants some..let me know!
Janh40@aol.com....

Hey there! I grew up enjoying bitter melon (both my parents are from countries where it's a frequently-included part of the cuisine), and my fiance and I just bought a house with enough space to grow veggies--and I can't WAIT to start some bitter melon seedlings! It's such a delicious vegetable--definitely not to everyone's taste, but I LOVE it, even crave it a lot of the time.

This blog has a couple of great recipes and a some lovely info about bitter melon:

Thanks for posting about one of my favorite veggies--I really think it's totally underutilized in the US!

Bitter Melon is a vine weed where I live in South Florida and the Florida Keys. I have been pulling the vines out of trees for years, and had NO clue what it even was. I was actually trying to figure out what a vine was that has cucumber shaped, but very smooth fruit about 4" long , and turn red when ripe. I never tried to eat any of these fruit.