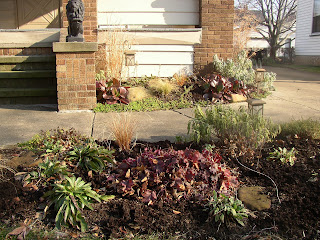 Today dawned bright and clear, with the slanting rays of winter sunshine adding a low glow to the garden. After a little bit of sleeping in and a long, long walk with the dog this morning, I headed outside... to mulch.

See, I never did completely use up the mulch I had delivered in the spring. It was this new mulch called Sweet Peet, and I really like it because it is fine-textured, dark, and breaks down quickly. I can never find as much compost as I would like to use as mulch, so this is an acceptable substitute. 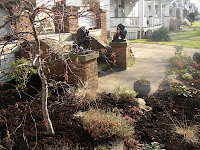 Mulching really did make a difference to the looks of the winter garden. Adding that rich dark brown as a foil makes the tans of pennisetum and the light greens of thyme and golden oregano pop in a satisfying way. It also highlights the light-colored bark of the Japanese maple and the doublefile viburnum.

While working in the garden--in just a sweatshirt and jeans--I noticed a whole lot of symptoms of this winter's El Nino pattern. For one thing, in normal winters my oreganos are mere twists of wiry stems by year end. Right now, origanum vulgaris looks just as full and lush as it did in September. O. vulgaris aureum is retaining at least 3/4 of its leaves. 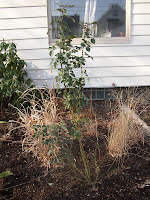 The rose bush that Brian surprised me with last year is still mostly covered with glossy green leaves. Its legs are a little bare, but even the shortest canes are still light green. Right now I'm kicking myself for leaving it where it is--it is slated to move to new home in the spring because I didn't think it would have enough time to settle in there this fall. Little did I know.

I did want to chop down some of the tallest canes because our winter winds and sometimes heavy snows can do some real damage to rose canes that are not supported on a trellis. It's so mild right now, though, that I have to wait for fear of unintentionally stimulating new growth. 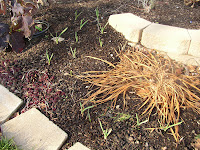 My drumstick alliums and every single variety of garlic I planted this fall have sprouted. The tallest of the sprouted garlic are well over 6 inches, as are the drumstick alliums (allium sphaerocephalon). At left you see the latest of the garlic sprouters, which are just about 3in tall now.

In the rest of the picture, you see the yellowed grassy foliage of Siberian iris and a sunken pot of oakleaf hydrangea that still retains its dark purple leaves. The short reddish purple foliage next to the mowing edge is either 'Voodoo' or 'Fuldaglut' sedum, which lost all of its leaves and has now sprouted the new little ones that you see in the picture. 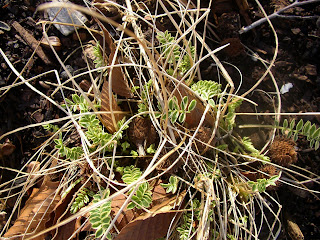 The one plant that really surprised me with its sprouting, though, is the variegated Jacob's Ladder, 'Brise D'Anjou' polemonium caeruleum. It has multiple leafy shoots are coming up from the base, entwined with last year's dead stems.

On the bright side, this plant has a reputation for not coming back reliably in zones 5 and 6, so it was nice to see it reappear. On the other hand, it will be interesting to see whether the sprouts will survive whatever weather conditions El Nino will bring us between now and spring.
Posted by Unknown at 1:55 PM

My apple tree is GROWING for crying out loud, in december....In chicago land!!!!

Oh and TAG, you are it! (check my blog for details)

Black swamp girl, I wish you a happy new year!

GGG, did you really mean to say that it's GROWING? Sheesh! My apple, pear, cherry and blueberries are all budding but I haven't seen any growth for pete's sake. Wow.

Thank you, Sigrun--I wish you the same!