The term solstice translates roughly to "sun standing still." It is used to describe the two days during the earth's yearly journey when its poles reach the furthest point as they tilt--one away, one toward--the sun. We tend to think that it is the sun, not the earth, that is moving so much in the sky. If the solstice gets any press at all, it is as the day in each year with the least amount of daylight.

There are many ancient traditions associated with the solstice, from building roaring fires to making blood sacrifices to holding large feasts. Most are aimed toward engendering peace and prosperity in the coming seasons. In a similar vein, the winter solstice is the day when some people who practice winter sowing get started, aiming for an abundant garden come summer. 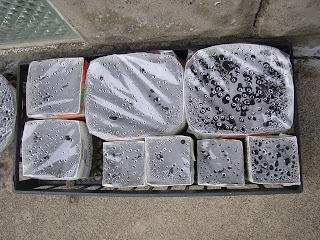 What is winter sowing? In a nutshell, you make little mini greenhouses from recycled cartons and containers, covered with plastic. Inside them, you sow seeds... then you throw the whole shebang outside, checking them occasionally to make sure they haven't dried out and see if anything is sprouting but otherwise ignoring them.

The freeze/thaw cycles of late winter and early spring work the seedcoat off of the seeds and eventually you get sprouts. The air holes in the top layer of plastic are added to or enlarged until eventually you have more spaces than material; at that point, the seedlings have hardened off and you can remove the plastic entirely and plant out your sprouts if the weather allows. 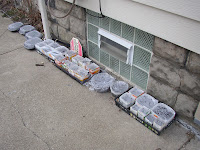 Last year, I started cautiously with winter sowing. The old saying that "if it sounds too good to be true, it usually is," kept running through my head... it just sounded too easy. I decided to try it in limited quantities--a test run, if you will.

I planted a few perennials, like 'Black Watchman' hollyhocks, blue fescue and asclepias tuberosa, in early March. A week or so later, I planted some annuals that I had failed to germinate inside previously: 'Hopi Red Dye' amaranth, atriplex hortensis, and sweet peas. Later, I tossed in some sunflowers and verbena bonariensis for good measure. 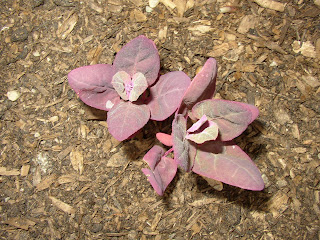 All but one type of seed sprouted for me--I can't remember which one right now, just that it was an odd annual from a seed packet marked 2004. I plan to expand my winter sowing efforts this fall to include more perennials like echinops ritro, sempervivum, crocosmia, and agastache. I am going to wintersow some red coleus, more atriplex hortensis and verbena bonariensis, and a whole flat of dark purple alyssum.

I am not, however, going to start sowing on the solstice. Much as I like the idea and the symbolism, in reality we have received January thaws a little too frequently in the past few years for me to be comfortable getting an early start. I don't want to have to baby sprouts that come up too early, or even worry about them--after all, the ease of it all is one of the main reasons why I love winter sowing!
Posted by Unknown at 8:30 PM

I am a seed sower, but mostly indoors. Perhpas I will try some outdoor winter sowing this year...

Great post Kim. I see you've already commented over at Kathy's blog where I shared that my problem is always planting too many seeds for my garden beds.

Have you got places chosen out already for these? They look like they're doing so well.

Carol, I just never seemed to have the space to do as many seeds indoors as I wanted--nor the patience to adjust lighting, etc. When I found winter sowing, it was a godsend... especially because I have found seeds for lots of things that I wanted to grow but could never find in the nurseries as plants in the spring!

Stuart, I guess that I didn't clarify--these were all pictures that I took of last year's winter sowing! (The pink sprout at the bottom was my atriplex hortensis.) I will probably not start this year's winter sowing until mid February, although I have already started collecting containers.

That said, I did have trouble finding space for everything last year. The annuals were easy, but some of the hollyhocks had to be transplanted in the fall--I had no space for them, because I didn't expect all 12 of the seeds to sprout! lol.

a great act of faith this winter sowing ... and very appropriate for the solstice.

I was wondering about whether to start them now or not. I don't think we have the same danger here of January thaws, but we've had a few February thaws. I'll have to think some more...

Let me know how the echinops goes, eh? That's another one I'd love to grow.

I will give this a try. It does look suspiciously easy, but if you had good results, I'll give it a whirl. What did you find to be the best type of container?

Sound like a great winter project but my problem with starting plants early or heck, even later, is that they get too leggy then flop, down they go. So they quickly outgrow the plastic 'greenhouse'. They're pretty anemic too even if they are in the sun. I just wait and plant the seeds in the ground when it warms up.

leslie, good point... any seed sowing is an act of faith. :)

Colleen I thought that I had started too late last year, but it worked out great that I didn't have to worry about too-early sprouts. I'll check the echinops packet... if there are enough seeds to share, we just might both have to try them!

meresy, by far my favorite containers were the cut-off orange juice or milk cartons. They were easy to tray up because they were square, they were easier to cut holes into than plastic containers, and once it was time to plant out you could just peel the sides and bottom away and end up with a cube of soil to cut apart. (Yes, the roots were really that thick!)

Ki, I was surprised at how compact the growth was on the wintersown plants, actually. When it came time to plant them out, I was shocked at the root growth on them... there were so many roots for such little initial topgrowth.

I want to wish you a nice Christmastime and a happy new year!

Hi Kim, It sounds a good idea to me, I know for sure that some seeds need spells of cold to germinate. By the way I hope you sow them in straight line LOL!! Anyway I hope you have a great Christmas and for sure I will be checking in again soon. Bob.

I have done a little bit of this in the past, inspired by Lauren Springer's The Undaunted Garden. Perennials seem to work especially well with this technique. I have Iris setosa and Lobelia cardinalis that I want to try this way. Thanks for reminding me. If you store your planting mix in an unheated space as I do, you may have to bring the bag in to defrost before you can fill the containers with mix prior to planting.

Thanks for this post, Kim! I can't wait to give this a try!

A week ago at our local Master Gardeners meeting seed starting was the subject presented. One of the gals demonstrated various ways to do winter sowing and stated she had been doing this for 3 years and had great success. Later I heard one of the other gardeners mention that she sows her flower seeds in the winter where she wants them to grow and has had good results. Learn something new every day