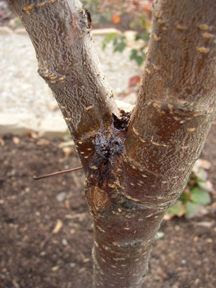 While out taking pictures in my garden in December, I noticed some very disturbing areas of gumming on my young Bing cherry tree. I took a few pictures of the affected areas, and began to research.

You know how it goes when you're researching diseases. First you have yourself convinced that you are looking at the worst case scenario. Then you go through a phase where you search for symptoms that would prove your ailment is something extremely treatable that can be mistaken for the more dire consequence.

Time and even more research seems to bring answers. The more I read about bacterial canker on cherry trees, the more I became convinced that this is what is afflicting my Bing--not an "easier" problem like winter injury.

The final nail was driven when I read about "dead bud disease," which is a manifestation of bacterial canker that causes buds to die back on the spurs in the spring. I saw that happen on this cherry (but only this cherry) in the spring of 2006, but had attributed the dieback to a very late freeze. I am pretty confident that this tree must have been infected already when I brought it home from the nursery in late 2005.

Some sites say that you can cauterize the cankers to help kill bacteria that live on their margins, or even dig them out with a knife. I simply am not willing to do all kinds of spraying and babying when I have such limited space in the garden--even though both my Dad and I love sweet cherries, halved and frozen--so on the first reasonably warm day I will go outside and remove it.

I do have two other cherry trees, one sour and one sweet. Neither variety is supposed to be as susceptible to bacterial canker as the Bing, and neither is showing any sign of disease. They both have resided a good distance from the Bing within my garden, so it is possible that both are still healthy.

Ideally, I will replace the healthy sweet cherry with another sour cherry, this one a larger variety than the dwarf 'Northstar' that I have. As for the spot where the diseased cherry was discovered, I'm still not sure. I think I need to go research elderberries, which I previously discounted for lack of space. Anyone know if the berries from those pretty dark-leaved sambucus nigra cultivars like Black Beauty make good jelly--or wine?
Posted by Unknown at 8:05 PM

I'm sure that it's terrible form to add the first comment to your own post, but I'm a newbie so please forgive me. I just had to post a link to this cool fastigiate elderberry that I found at Klehm's:
http://www.songsparrow.com/2007new/plantdetails.cfm?ID=2531&type=Woody%20Plants&pagetype=plantdetails

WOW. Hmm... I wonder if a fastigiate purple one can be all that far behind?

Hey, it's your blog - you can do what you want!

Kim, how old is your 'Northstar' cherry? And how big do you want the replacement tree to get at maturity? Philo and I had Northstars at two different houses, and they grew larger than the 8-10 feet on the tags. At the second house our pair of North Star Cherries got up to about 15- feet tall by age nine.

Uh, oh I have a Yoshino cherry that's weeping like the one in your photo. I was trying to ignore it hoping that is would get better. The tree remains vigorous but I guess I better read up on the disease. As it's purely ornamental I don't have to worry about the fruit. Thanks I think for bringing my attention to it ;)

I just dug and pulled up our regular elderberry because it was spreading too vigorously. Don't know if I got it all but makes me shy away from all elderberries. I've seen a lot of the S. nigra being sold in the past few years but don't know about the quality of the fruit. Don't know why it shouldn't be as good as the common variety.

Such a shame Kim however it's great to hear that the other two haven't been troubled by it.

Fortunately [looking for the good in the situation] the tree is only a couple of years old. I'm sure you would have been guttered had it been quite old.

All the best with your next choice though and I'm eager to find out what you finally decide on.

Yeah... I've been thinking about this. There is nothing good about it. There is only "not so bad" - Stuarts comments.

I love Cherry Trees. I hate the thought of removing one. But you have to do it.

Sorry about the cherry tree. :(

My father has had great success with elderberry and even makes wine with the berries.

If the bacterial canker is a problem that's localized within the Bing, rather than having the bacteria already spread throughout the entire tree, you could try grafting a branch or two from the Bing onto your other sweet cherry tree before you get rid of the Bing. That way, it could still cross-pollinate. I'm planning on going to a fruit growers' scion exchange in a couple weeks to get some cuttings from a cherry that would be compatible to graft onto my Ranier cherry. I haven't tried grafting before, but I've studied it in class and it seems pretty easy and has a good chance of being successful. If it works, it can be a good solution for gardens like yours and mine where space is limited but cross-pollination is necessary.

Annie, the northstar is very young--not even producing fruit yet. Thank you for the warning on its mature size. A friend of mine who lives in the same suburb (with the same sandy soil) mentioned that one of the large cherry trees in her backyard was supposed to be a dwarf but wasn't... I know she keeps tags so I will ask her if it might be a Northstar and plan accordingly.

Ki, there were plenty of other potential reasons for the gumming, so hopefully you have one of the lesser evils! (And remember, I refuse to baby or spray. Your situation might be different.) Thanks for the heads-up on the Elder and spreading. I will have to research these more.

Stuart, you have definitely found the silver lining... if it was older and bearing fruit already, I would definitely be much worse off! (Mentally.)

Clerk, I know what you mean. I am now considering what I can do with the main trunk...

Anthony, if I decide to go with the elder, I will definitely have to research the wine! *grin*

Clare, I love that idea! The Bing is diseased through, through. Hmmm... I may have to check out local fruit growing societies to see if it would be possible to get scions for grafting...

So sad about your cherry tree. Our local extension agent is an arborist. Perhaps you have one nearby who is also? If so, he/she would come out...for free...(schedule permitting) and give you an opinion...might be worth it.

I do hope you find a solution and can have your cherries. All the best.

Oh dear I must check out my bings to see if they have this disease..YIKES!

gotta garden, thanks for the idea. I probably would have an arborist come out if the tree was already established. At this point, it seems just as easy to change my mind--terrible as that sounds. (But if the other cherry trees show the same signs, I might be in need of some professional assistance!)

Don't worry, naturegirl, I bet you would have noticed something wrong by now if you had this problem. And even if you do have gumming in a few places, there are lots of reasons for that. (Trust me, I think I read about all of them!) :)