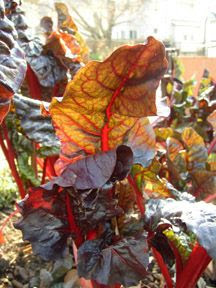 I believe that my love affair with 'Rhubarb' Swiss Chard was pretty adequately documented on this blog, with many pictures posted of light playing through its thick, red-veined leaves.

Swiss chard is a member of the beet family, which easily explains the thick root that you can see at the base of the plant in the second picture. In fact, it is a variety of beta vulgaris (the same species as the common beet) that was cultivated over the years specifically for the taste of its leaves rather than the flavor of its root.

While researching Swiss Chard, I found quite a few named cultivars and mixes. 'Rhubarb,' 'Ruby,' 'Bright Lights,' 'Rainbow,' and 'Fordhook Giant' are all well-known names in the world of chard.

I briefly considered purchasing seeds for 'Fordhook Giant' or another white-veined variety to grow in my 2007 garden for a change of pace. In visiting the websites of seed vendors, however, a completely different option presented itself: Kale 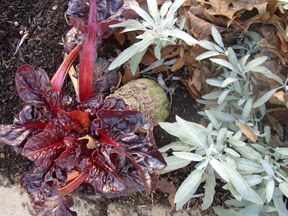 It sounds like I'm a little fickle here, I know, but it really is a smart option. I love Swiss Chard sauteed in garlic and olive oil, with a little sea salt... but to me there is very little taste difference between Swiss Chard and beet greens prepared that same way. I know that I am going to be planting beets again this year, so why not branch out in the greens department? I find kale to have a very different taste.

A few extra searches confirmed that I have to grow kale in my garden this year, if for no other reason than to enjoy the interesting texture it provides. Now the only question in my mind is this: From an aesthetic standpoint, which way should I go? Lacinto Blue? Or Redbor? Anyone have input on the aesthetic value of kale?
Posted by Unknown at 5:44 PM

Go for Lacinto Blue or as I've seen it called Lacinato. Lovely crinkled dark leaves, almost black with a tinge of gunmetal blue. Super to eat too steamed with garlic, a dash of red wine vinegar and a pinch of sugar!

They'd both look gorgeous, but if I had to pick one, I'd go with Redbor. Of course, I don't know how redbor tastes. I know Lacinto Blue tastes great, as John mentioned above. But aesthetically, I like the redbor better.

I'm growing kale for the first time this year as well and had decided on the dinosaur kale but only because I didn't know about the Redbor. Hard choice. Both would be really striking in the garden, both providing a good background for other flowering plants. And both probably taste good. Grow both.

I agree with meresy_g...grow both! That way, you could really get a sense of architectural AND taste differences between the two, so you can choose just one for next year. (Or both again...whatever:)

Thanks for this post. 'Rhubarb' chard is one of my favourite veggies, too! You took some nice photos!

I agree with anita. My chard was a great fun for me in summer. I had it on the raised bed and so my neighbours couldn't see me.

The Lacinto looks like it would taste better. Since aesthetically either will work, why not go for taste? Plus from reading this blog I know you have a lot of purple in your garden already, so it might be interesting for you to work with the Lacinto Blue kale instead?

Just the thought and pictures of the various chards and mention of the word "rhubarb" reminded me of the first spring I ever saw ornamental rhubarb in the border of our pond garden. It was early spring and the weather had been warm at first, then turned cold. A round, tight ball pushed its way out of the ground, growing larger and larger and brighter and brighter red.

After attaining football size it unfurled on the first warm day but until then, it was a curious, almost alien-like piece which confused gardeners and entertained the neighborhood kids. Just like these rhubarbs you mention, the ornamental capabilities of the various rhubarbs enhances flower and container gardens.

John, thanks for the tip--I never would have thought to add a pinch of sugar when cooking kale! Gunmetal blue does sound rather nice...

Colleen you see my dilemma! :)

meresy_g and lisa, I really need more garden purchase enablers like you around. *grin* Now that you mention it, I could use the red in the front and the blue in the back...

anita, thanks! I liked the 'Rhubarb' chard, too.

sigrun, wow! You must be a better chard grower than me if yours got that tall. :)

Karen, that's a good point. And I just did a Bluestone order in which I bought even more purple: 'Purple Emperor' sedum and 'Plum Pudding' heuchera. Hmm.

George, thank you for visiting my blog. :) I loved that story--and I'm glad that you mentioned the ornamental value of real rhubarb, and that it grows well in container gardens. I'm always looking for interesting containers plants!

I love chard as well. I have been growing rainbow chard for a few years, I just love all the different colors of the stems.
I have never grown kale, am meaning to this summer. I like the red colored one for its looks, and it's nice and crinkly.