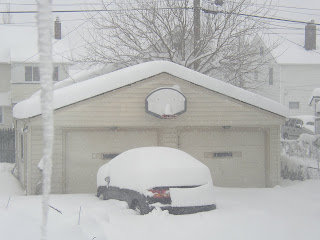 This is the backyard that awaited me when I woke up this morning. Notice the thick layer of snow on top of the mostly uninsulated garage, and the huge icicle that is hanging from the small section of roof over the picture window? The terracotta tile I mentioned in yesterday's post is identifiable only by the extra mound of snow that finally covered the sedum completely. Where the lions used to be, misshapen cones of snow stand guard near the front porch instead. 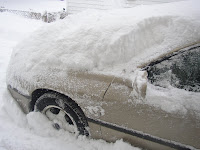 My boyfriend is using a hard plastic shovel to clean most of the snow off our cars until using a regular scraper is actually doable. Here's my car (a Chevy Impala) that was completely clean when I got home from work yesterday at 7:30pm. To be fair, some of that snow probably blew off of the neighbor's roof... but still. That's a lot of snow! And do you see the top edge of my neighbor's 3 ft tall chain link fence in the upper left corner? There are drifts where I can only see the top 2 rows of chain link "diamonds." 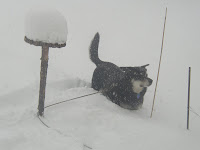 I would say that the "low spots" are about 14 inches deep, and there are drifts well over 2-1/2 feet tall. It's still snowing as I type (hence the greyness of these pictures) and it's supposed to be so cold all week that I have no idea when the snow will finally go away.

As I told Snappy in response to his comments on yesterday's snow posts, having snow in April is not unheard of here in Cleveland. Having it in these kinds of quantites that actually stick to the ground is... unless you're in the snow belt on the eastern half of Cleveland. (And don't you dare feel sorry for those people, even if they did have 30 inches of snow this weekend. They knew about this snow belt thing before they bought a house there--this isn't a new phenomenon!)

On the bright side, my "sled dog" was having a blast mushing down the sidewalks during our walk last night. She's not smart enough to keep from getting tangled around the rustic platform birdfeeder that we put up temporarily for the spring rush now that my twine-and-bamboo border edging is buried in the snow... but she can pull me through the drifts whenever I need a little extra assistance.
Posted by Unknown at 1:40 PM

oh, my. Ours keeps melting off and then reappearing, but nothing so deep! Egads. That's horrific!

Wow. I was just whining to you on the comment you left on my blog about some snow we're suppose to get this week and come here and see your pics.

I guess I should be happy they're not calling for this much snow. But at least your dog looks to be having fun.

How depressing, and here I am bitching about the cold.

Your photos have left me speechless but sympathetic, Kim.
At least it's insulative since you're still pretty cold there!


Annie at the Transplantable Rose

Wow - unbelievable. And here in the Twin Cities we're just complaining about temperatures in the 30's!

I can hardly believe your pictures. It's one thing, as you noted, to live in a climate where this is expected, quite another when it is a once-in-a-lifetime (hopefully) phenomenon, we hope!

Now see, Kim, you should just move back 'home'! LOL. Actually, with this cold, I'd welcome some more of that snow. We've only got maybe an inch.

Incredible!!! Are you sure these aren't Christmas photos? I guess I shouldn't have complained about our 45F snow-free Easter today. My sympathies... (but spring will come, even to Ohio)

kelly, it always amazes me that the weather can vary so much within an hour's drive. :) I can have to wear gloves and a coat when I'm leaving my house in the morning some days in the spring, and then by the time I drive the 30 minutes south to work I'm taking off layers!

mr brownthumb, oh she is. She definitely is. And so are the teenagers down the street--this is GREAT packing snow! lol.

ki, you can still complain about the cold! I'll sympathize!

Annie, you are exactly right, of course. It is nice to have a little snow to insulate the plants if it's going to be this cold. I just can't help but think the plants would have done okay with just 4-6 inches of snow. And then I wouldn't have to shovel! :)

Carol, this is now already the 5th snowiest April on record in NE Ohio per the official measuring site at the airport. (We got more than they did there.) Oh joy, right?

Kylee, did my parents somehow find you and talk you into posting that comment?!?! lol. My Dad said much the same to me today: "You know, out here in God's country we don't get that kind of snow in April." I asked him what kind of marketing jobs they had out in God's country and he said he'd have to check on that. :)

carltongardener, your cute little gnome would have been buried in the snow had the Easter bunny brought him here! Thank you for the words of encouragement... I am itching for spring.

Kim, this may be the pittiest spring ever (and that's saying something)! Like Annie said, at least you have insulation for your plants; it was 17 degrees here... the daffodils look like you just let air out of a balloon. It's going to be a short, muted spring.
Don

Wooh. Green xmas, white easter. I suppose I live in a climate where this sort of thing (shouldn't) happen but ahhhh... oh well, snow can be pretty (and is especially nice when it melts).

We have sprinklings up to several cms but so far it's melted.

Wow, I'm feeling very small for complaining about the 2 or so inches of snow we got on Saturday. When is the thaw due?

I thought of you right away when I saw the news last night @ all the snow in Ohio...I feel your pain (but luckily, only to the tune of a dusting or so)...guess both our winter-sow projects are getting their winter on! Hope you get a thaw soon!

Oh my. I guess I should just stop complaining about the cold on my end. Evidently it could be far worse. This revenge of winter really sucks doesn't it?

My neighbor's kids made a snowwoman this weekend! Today is just plain cold.

I am glad your dog was happy, though.

Wow I can’t picture that much snow, I hope it melts fast so you can get out to your garden. Thanks for stopping by my blog, the answer to your question. I kind a like chaos in my garden, I don’t think too much about colors, if I like the plant and I find an place it goes in the garden.
PS I can't see my dog in that snow she would never go out of the house

Pack it all up and send it to the Sierra Nevadas. We need it.

I am just amazed at the snow...I have no memory of that kind of snow at Easter when I was growing up! I hope you get some spring soon...one that stays around a while. :)

Amazing! And to think that I was complaining about how hot it was on Saturday when I was on the allotment!

That is a lot of snow you have there. How very different from the weather over here. Hopefully all that snow will melt away soon and you can get back to spring again.

I don't think I can add anything to what the others said, but I wanted to chime in anyway to declare you the winner of the most April snow out of all the garden blogger snow recipiants! I guess you can build a snow fort adorned with frozen tulip blooms!

Kim, I guess I shouldn't be complaining today - it is snowing here, but at most we will receive 5 cm. The snow is melting on the roads, so it is nothing like what you have. The good thing here, though, is that our garden are still frozen solid as they have been for the past few weeks.

I'm looking forward to some better news from your corner of the world soon!!