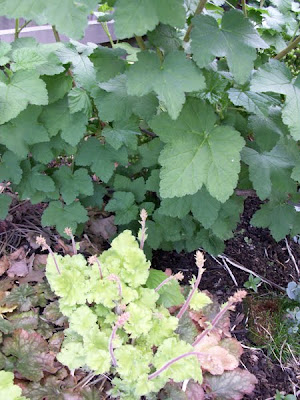 May is the Month of new beginnings in the garden, colorfully illustrated by the 'Key Lime Pie' heuchera that is emerging from its cast-off fall foliage in the photo above.  It's also a month of surprises, like this flowering stem that's sprouting from the red cabbage I neglected to harvest in the fall: 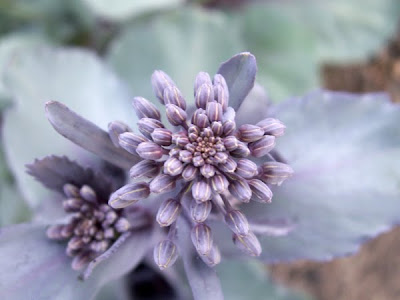 And then there are the surprise seedlings, like these baby hellebores that are popping up all around the peach tree: 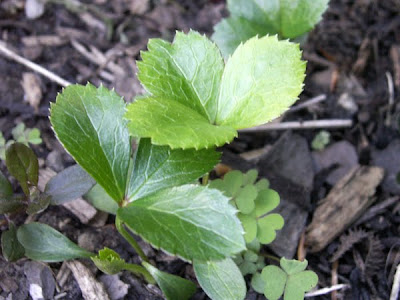 Speaking of the peach, it was covered in blooms last month.  I was a little worried because I didn't notice any pollinators hovering around it while it was flowering... but apparently they were just being a little circumspect with their activities.  I now have evidence (YAY!) that they were there: 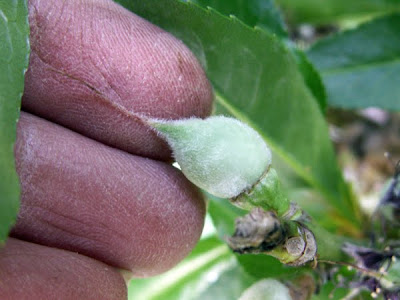 My friend Alli gave me a bunch of extra allium bulbs back in... 2008?  And I was bummed when I didn't see any luscious, large purple allium balls bouncing around on the wind in 2009.  I couldn't even remember where all I had placed them, but it seems like a few made it to the ground beneath the cherry tree: 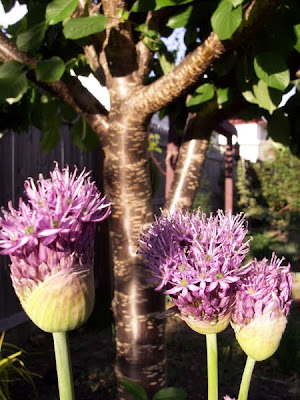 A chartreuse-colored, miniature hosta (labeled 'Dawn' and purchased at a master gardener sale the first year I moved to my suburb) almost melted out of my garden last year--I think that a nearby ligularia was stealing all of the moisture from them.  'Othello' met his demise this spring (insert Shakespearean tragedy joke here) and I now have FOUR new 'Dawn' hostas happily sunning themselves as the feet of a 'Looking Glass' brunnera: 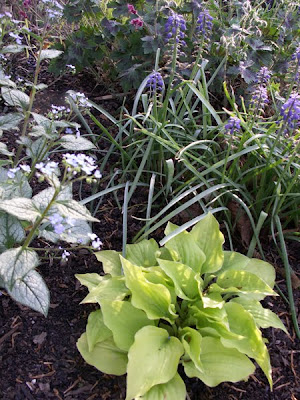 That's the end of the good surprises.  So here's where I confess to my rookie mistake.  Wait, before I confess, you tell me:  What do you think is wrong with the photo below? 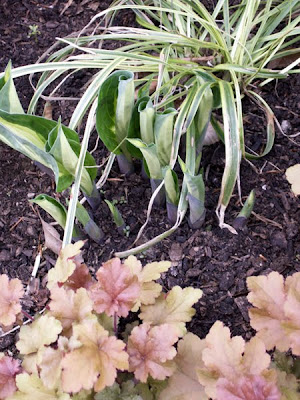 If you asked why on earth a 'Striptease' hosta is... er... getting a little fresh with (yeah, I couldn't resist) the recently transplanted variegated liriope, that's a very good question!  And the answer is:  I made a rookie mistake.  I transplanted the liriope a few weeks ago, not remembering that I had planted the rescue hosta in that spot last fall.  And since I don't have a current, accurate garden plan to remind me, I'll be relocating the liriope again very shortly.  Ah well.

Let's not dwell on my mistakes, though.  Instead, let's end this post with a few more photos of the beauty that is May in the garden.  First, the regal 'Queen of Night' tulip, with various companions: 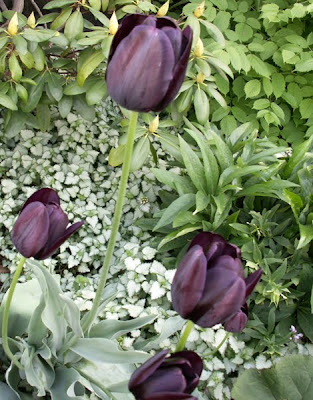 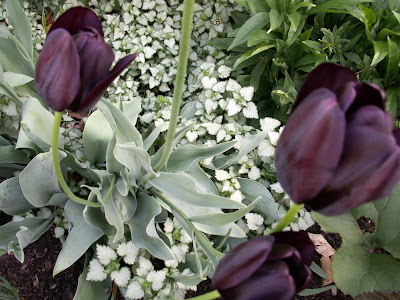 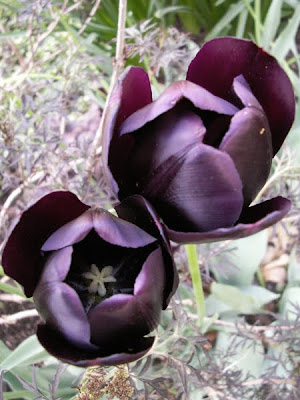 Second, the lovely smush of 'Hillside Black Beauty' bugbane sprouting up around the edges of 'Zweiweltenkind' goatsbeard--don't worry, I cut the goatsbeard back hard after it flowers, which gives the bugbane more room: 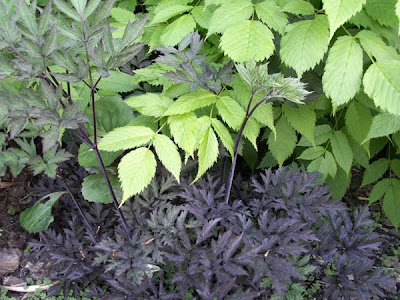 Last but not least, what would spring be without the sweet scent of woodruff?  I know that this groundcover can be a little aggressive for some, but I adore it.  Here you see it marching up to 'All Gold' hakonechloa, while some 'Pine Knot Strain' hellebores (the parents of some of the babies mentioned above?) stand sentinel above: 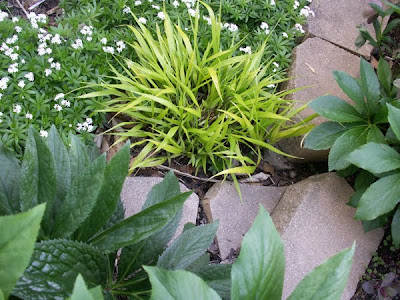 That's all for today.  (But expect a drool-worthy post on the obscenely gorgeous lonicera sempervirens tomorrow!)
Happy May!
Posted by Unknown at 12:08 AM

Ahhh, the black tulips in the bouquet? Colorblends has a blend of black and white called 'Tuxedo'. I wasn't overly impressed with that company but the orange tulips were magnificent. Love your woodruff. Have you dried any of it for that sweet hay scent?

I had to consult photos from last year to locate a few hostas that just seemed to take forever to come up this spring. Garden plan...it's called a digital camera!

Hostas are do make a late arrival in spring. I have planted things too close to them before. A simple lesson learned. Too bad I have to relearn that one every year or so. Ha.. Your garden is looking beautiful with all that lovely foilage coming up. I found some baby hellebores too. It is such fun to see them popping up. For several years I dead headed so much that I wondered why I didn't have baby hellebores because someone told me I would have oodles of them, Another lesson learned. Ha...

It's hard to remember where those Hostas are and how big they get. The Actaea/Aruncus combo is great, similar leaf shapes, but different sizes & colors. Aruncus doesn't like my garden, but for some reason it looks like it's going to bloom this year.

I enjoyed the texture and colour combinations of your photos. Those glimpses of your garden are lovely.