An Ugly Loss, and A Pretty Bouquet

There was an ugly loss today in the garden.  This photo documents the carnage: 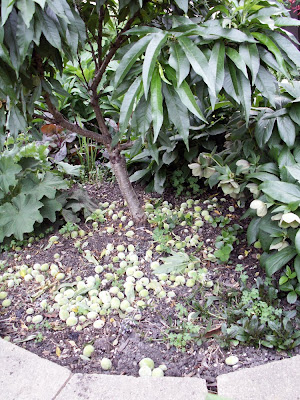 The worst thing is, this is a problem of my own making.  All of those little tiny green never-to-be-peaches that you see in the photo above are the result of me putting off the task of thinning the flowers on the peach tree this spring.  "I'll get to it," and, "Oh, but they're so pretty and nothing else is blooming right now," seem like weak excuses in the face of having to thin SO MUCH fruit.  Hopefully, I will remember this pain when I see branches full of peach blossoms again next spring!

But enough of that. Let's focus on something more pleasant.  Like the way the coloring of 'Matrona' sedum picks up the burgundy stain of the grape arbor: 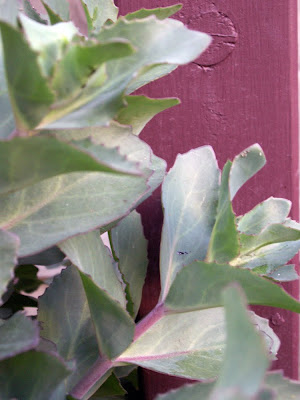 And how pretty the ruby orach, atriplex hortensis, looks next to the blooming fescue and the 'Clear Gold' thyme that cascades down the side of one of the dry locks: 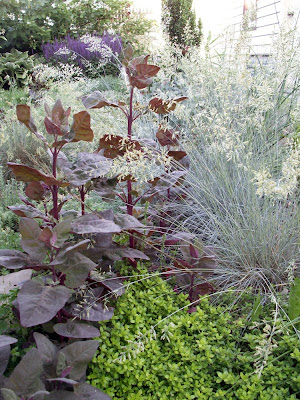 And how even some of the messy areas are pretty, like the other side of the same lock shown above.  Some of my asparagus gets knocked over by dog feet, and flops into the "lock," gracefully arching over the blue-foliaged silene and sedum: 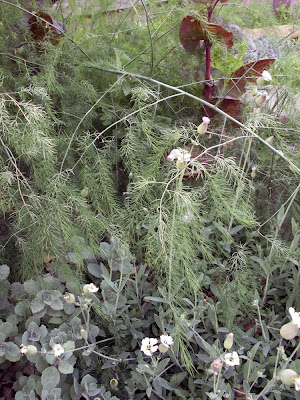 The smallest of the sedum cauticola 'Lidakense' that I planted in the wall pockets a few years back now peeks sweetly through a screen of Japanese bloodgrass.  The woolly thyme still cascades across the wall above and behind them, and 'Chubby Fingers' sedum album grows at its feet: 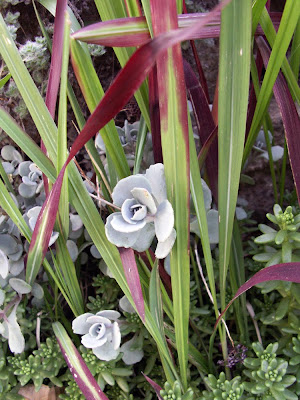 Okay, that helped a little.  So does making up random bouquets, which I regularly do when I'm cleaning up things or putting around the garden throughout the growing season.  You cut a few encroaching hosta leaves to free a heuchera, figure that you can put the flowers that you just cleaned off the plant to better use in an arrangement, grab your grandma's old milk glass vase, and go hunting for a few other things to use as a filler.  I decided to include lady's mantle flowers and a few branches of honeysuckle flowers: 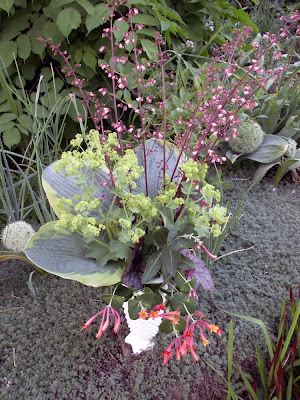 I think I like this one better from the top, though.  So I'm going to have to place it in a low spot where I can look down on it, and see this pretty view: 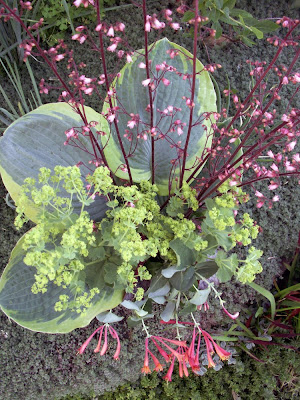 I hope that everyone has a beautiful Memorial Day!

I am so glad that you posted this about your bouquet. We are going to a cookout today and I didn't know what to take since they have all the food prepared. I will take a bouquet. Yours is a great inspiration as are the planting combos you have shown today.

Poor peach! ...Matrona does looks perfect with the burgundy stained arbor...Stain has helped me bring color to my way too green May garden! I even stain those orange plastic pots! Love the bouquet~leaves are a good way to jazz up an arrangement! gail

Combinations of random garden clippings make for some interesting arrangements. Your Atriplex are giants compared to the 2" sprouts in my garden. Maybe I should give them some fertilizer or something.

That is a pretty bouquet. I'm trying to bring in more flowers this year, but I forget to add in leaves. Using Hosta thinnings is a great idea.

yes, to be imperfect! may you keep being able to recognize what went wrong and what is beautiful ;')

Thank you, thank you. I have been trying to figure out what was wrong with those roses of mine. You are right they are from the Dr. Huey rose. The grafts must have died that year we had that terrible ice storm. Well they are all going now. They mildew like crazy anyway so it seems a bad rose to graft to. LOL! Thank you for helping solve my mystery.
Lona

Nice - fun blog! Thanks from another Ohio gardener. You show some plants I never thought of - always learn something from fellow gardeners.
http://gardeningnaturallywithclaudia.blogspot.com

Love the ruby orach - I've never tried it, but have been tempted. I've sort of assumed in our heat that it'd do well for March and April, and then bite the dust. How long into the heat of July and August does yours do okay? It's so beautiful in your garden.

I gave up on my southern peach. Honestly, to keep them going down here you have to spray almost weekly and I'm not willing to do that (I think it's because of borers).