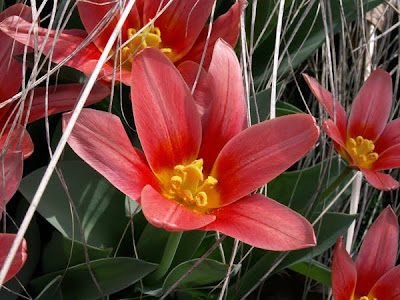 When I was growing up, summer meant rambling through the woods, setting up "dirtbike trails" and constructing various ramps for bike-jumping contests.  It meant swimming at one grandma's pool, and heading to the other grandma's driveway to shoot hoops games that started out as P-I-G and ended an hour later as P-I-G-G-Y-F-A-C-E.  Summer meant fishing in the neighbors' ponds, figuring out how high we could pile toppings on a Chef Boyardee pizza, and chasing long fly balls for miles (or so it seemed) if a hit went past the 3 or 4 kids we recruited to "play baseball" in the field across the street.


And summer nights?  Those meant listening to the gentle twang of one William Earnest Harwell, accompanied by the occasional crackle of static--or Tiger Stadium background noise--on the radio.  Ernie used to say that TV was the movie version of a baseball game, while radio was the novel... an amazing storyteller, he seemed to effortlessly transport his listeners to whatever place or time he had on his mind. 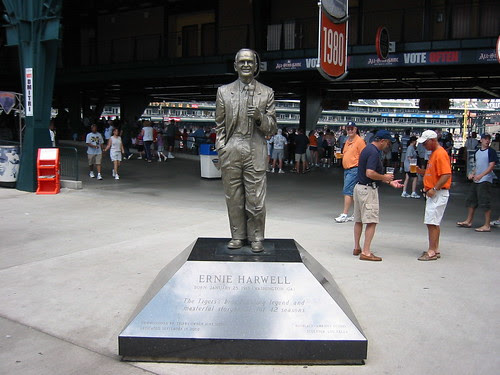 In truth, Ernie was a hard worker with a complicated filing system of trivia.  He spent hours doing his homework, so that he had plenty of nuggets to dish out in the course of a broadcast.  And his mind was so full of the minutiae of his sport that you couldn't help but wonder whether any event dared to occur on a major league baseball field without notifying Ernie first.  Until I was old enough to pick up on the joke, I truly believed that Harwell knew which city was home to every single person who caught a fly ball or home run in the stands.  (Why not?  He knew everything else, it seemed!)

Here's a bit of trivia that would probably not have been mentioned by the humble Mr Harwell on the air:  Ernie was the only broadcaster in the history of baseball to be traded for a player.  The Brooklyn Dodgers traded a catcher to the Atlanta Crackers in return for Harwell in 1948 when their regular announcer, Red Barber, was hospitalized.  A consummate professional, you heard nary a peep from Ernie when he was inexplicably fired after the 1991 season--but Tiger Nation roared in protest, and the club's new ownership brought him back into the booth in 1993.  His 2001 retirement happened on his own terms. 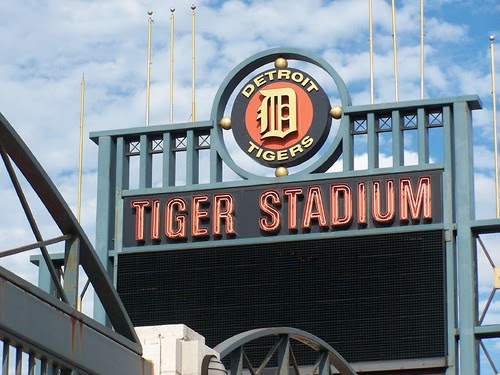 From Flickr: The old Tiger Stadium. Ernie offered up his entire collection of baseball memorabilia, amassed over his long lifetime, if only Tiger Stadium could be kept open as a museum.  But his attempt at salvaging the old park was in vain.
Photo by josephleenovak, reposted here through Creative Commons permissions.
"He stood like the house at the side of the road and watched that go by."  That was one of his signature lines (for a called third strike) but definitely not the way he lived his life.  By all accounts an active, engaging man, the way he announced his terminal cancer to Tigers fans last year still brings a tear to my eye.  We should all live... and die.. .with such peace and grace.  But clearly, to borrow a phrase from my grandmother, they broke the mold after Ernie. 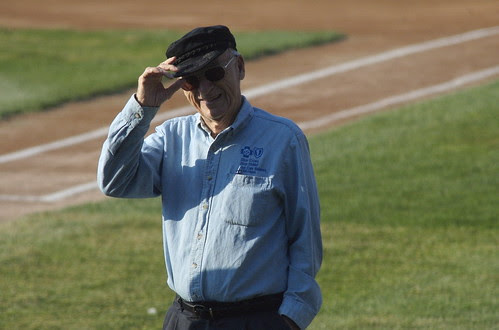 Flick photo by mwlguide and reposted here through Creative Commons.
Rest in Peace, Ernie.  For me and countless others, you will always be our Voice of Summer.
And you will be missed.

Our family will truly miss Ernie...he really was the Voice of Summer for kids growing up in Michigan...
I remember being a kid, sitting in my Grandparent's backyard, listening to the game on the radio. Ernie's voice always took me back to that time....

My husband remembers him. You have written a wonderful tribute to him. I didn't remember him. I did used to listen to Red Barber every Friday as I drove to work. I missed him when he was gone so I know how you must feel.

Sharon, didn't he have such a wonderful, soothing voice? I think that Ernie Harwell could have announced that the world was coming to an end in an hour, and I would have still felt comforted.

Greenbow Lisa, I am kind of surprised at how much of a loss I feel. I'm not much of a celebrity gawker, etc., but he was kind of like a third grandfather to me, somehow. I was even tempted to drive up to Detroit today to pay my respects at Comerica...

I understand how you must feel Kim. I had similar feelings when Chicago's voice of summer, Jack Brickhouse, passed away about twelve years ago. Growing up on Chicago's north side, I spent many summer Saturday afternoons glued to his play-by-play on TV. It was always a thrill to catch a glimpse of him in person from the bleachers when we occassionally got to see a game in person.

A beautiful tribute, Kim ... there was NO ONE like Ernie nor will anyone ever take his place. You are much like me, we hate to say goodbye to those things in life we love. ((Hugs))