Who's Confused: Me... or Bengal Orange? 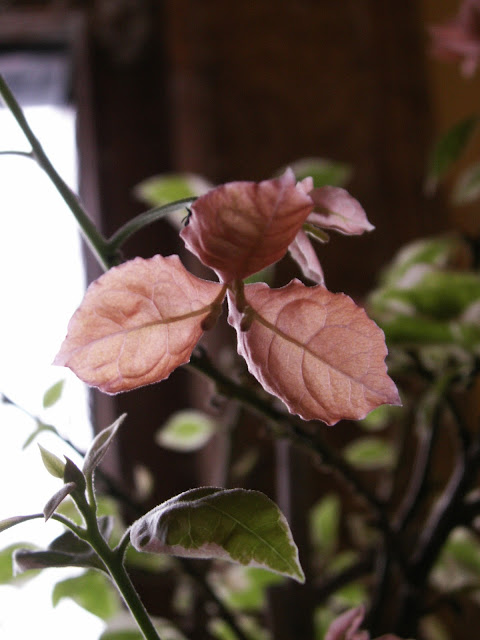 This will be the second winter that I brought 'Bengal Orange' bougainvillea into the house. Last year, I put it on a prominent spot on the plant bench... and it quickly dropped all of its leaves and looked like a cluster of dead sticks attached to a trellis. Its "play dead" act lasted until June, when it grudgingly put out new leaves after a couple of weeks outside. In spite of its sunny summer spot, though, it never did bloom. 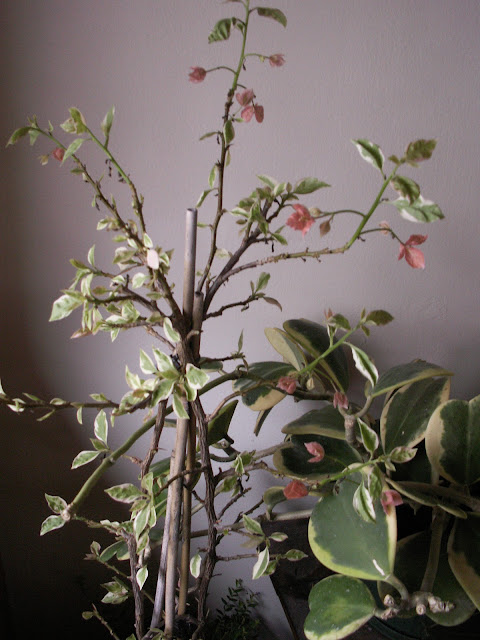 Since it looked so uninspiring last year, this year it got tucked into a corner where it would be mostly hidden behind a large-leaf hoya on a stand, and a dark leaf rubber tree. It promptly dropped all of its leaves as expected. Imagine my surprise when it decided to throw out (tiny) leaves a month ago... and then started to bloom! 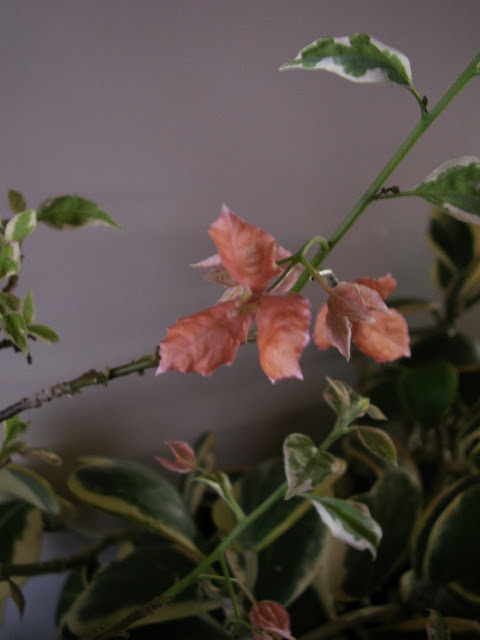 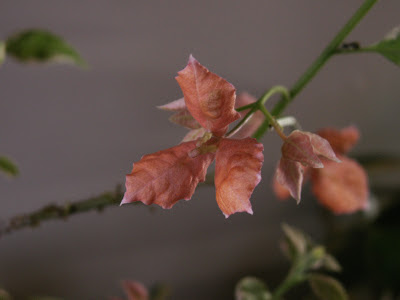 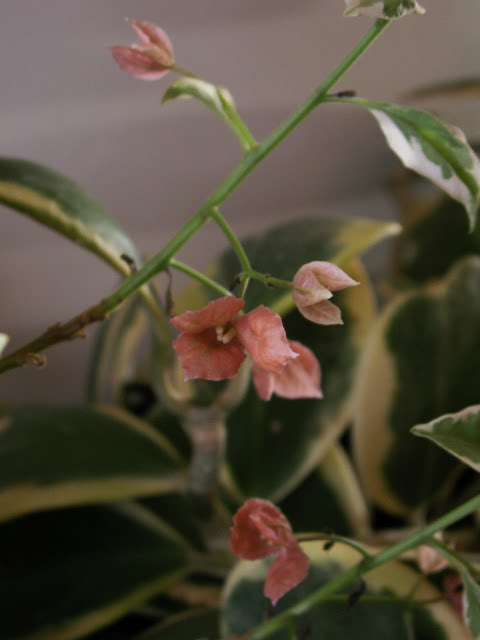 Granted, I'm using the term "bloom" lightly here. With bougainvillea, the brightly colored "flowers" are actually the bracts around the flowers, not the flowers themselves. But they do add a nice touch of color, and were a big surprise since this plant didn't bloom at all this summer.

I'm guessing that the south-facing window next to its current winter home has helped to encourage it to re-leaf and bloom, but I'm a little worried about it now. I don't want to have it go through another leaf drop and really get stressed, to the point where I lose it! It's used to having a cool, dry season in its native home, so I hope that bodes well for me being able to keep it in leaf and happy until spring.

Thanks, Greenbow Lisa - the more fingers crossed, the better my chances of overwintering this guy again! ;-) Happy New Year!

Hope it finds a path to survival. I think the climate has lots of plants and humans confused these days

Ahhhh, it has risen and performed under threat of death! LOL Expect the unexpected.

It's nice to have some unexpected and exotic colour blooming indoors, when things are more bland outside. Perhaps it will keep its leaves and bloom outdoors for you next summer.

Threats work with plants! Love it!

Good luck with your project. This vine growing outdoors in it's natural climate is really stunning, California is full of it. Alas for me in the north it is not to be.

Kim, I wish I would bring my plants in. Every winter, I long for a geranium or anything with color.
When I did bring my tropicals in, I put them in a cold dark place so they would "go dormant" and bring them out in Feb. I wouldn't even water, they'd drop most leaves and come back by March, ready to face another summer!
Best of luck!
Sis

Looks better than sticks at least! The blooms sure do look like poinsettia bracts, but definately not orange :)