(Fixing) Mistakes by the Lake 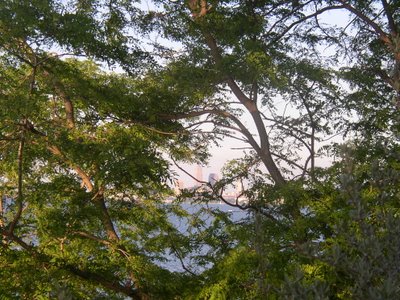 Find it hard to see the city of Cleveland through the brush and over the lake in this picture?

Well, for years it's been hard to see the lake from the city, too, unless you're lucky enough to have an office on the north side of your tall, soulless concrete box. Ordinary mortals sometimes catch a glimpse of sparkling blue as they drive the shoreway. Often this sight is accompanied by a jolt of remembrance: "Oh YEAH... I live near one of the Great Lakes!"

The relative inaccessibility of Lake Erie has been one of the many "challenges" mentioned in our local media lately. Seems that after years of fencing off waterfront and erecting "No Trespassing" signs, the powers that be are finally recognizing the vast potential of the body of water to their north. Living near one of the Great Lakes is cool, and we might want to embrace that idea? Gee, who'da thunk it?! 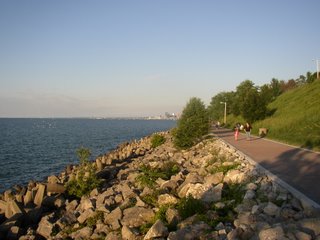 Last weekend, I had a chance to go visit my local park and take a walk on their recently unveiled, newly bricked walkway. There is still a field of stone and recycled concrete between you and the lake as you stroll. But it's a huge improvement: The closest you could get to the lake pre-walkway was gazing at it through a chainlink fence that still perches at the top of the green bluff above the new walkway.

Yes, people would hop the fence and come down to the lake anyway. But the difference between furtively checking out the lake--as you keep watch behind you for anyone who looks official --and enjoying the lake while lounging on one of the several recycled-material benches placed along the length of the path is amazing.

Want to bring grandma down to see the lake, too? No problem--everyone takes a wheelchair-accessible ramp to traverse up and down the bluff to the walkway. The lakefront arms are wide open here.

Two circular brick patios bookend the path, which might be about 1/4 mile long all told. The city logo is featured in the middle of the eastern patio, and the centerpiece of the other patio is a directional sign showing North, South, East and West. I love that the directional salutes Lake Erie's shipping roots, and that they put one of those binoculars-on-a-stick machines on the eastern end but are keeping it free for all to use.

With the binoculars, you can get a closer view of the Goodtime and any other local sailing ships or motorized boats... or of the city itself. But thanks to the new walkway, you don't really need binoculars to get a good view of Cleveland. Or of the lake to its north. 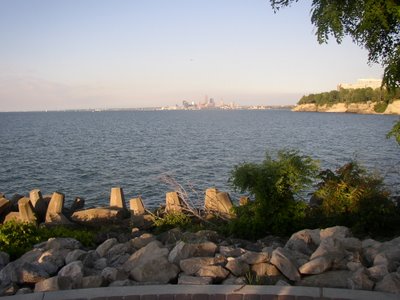