In Praise of Nomadic Plants

I guess that all gardeners have nomadic plants--you know, plants that regularly get moved from spot to spot. Sometimes we decide we don't like them where they are, sometimes we find something that would suit the space better... and sometimes we move them just because we know that we can and they won't mind.

For me, my most nomadic plant has been heuchera "Regina." I bought a 3-pack of Reginas from Bluestone years ago, and they were moved several times around the yard at the old house. In the spring of 2005 they followed me here thanks to the generosity of my ex, who allowed me to move many things from the garden in the year after I moved out. 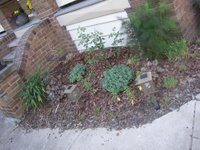 In the first picture, you see a couple of Reginas just after they arrived here--plopped in a bed without much thought, but still blooming their little hearts out.

The Reginas didn't get to stay there long, but I'll be darned if I can remember where they snuggled in for the long winter of '05. All I remember is that early this spring I moved them next to the driveway 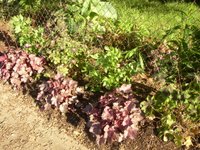 as I transformed that strip from a ribbon of grass to a long but shallow border. The second picture shows three Reginas next to some geranium phaeum "Samobor" and a couple of lovage plants.

When the bed was finished, Regina probably figured that she had finally found her "forever home" next to some large blue-leaf hosta, the aforementioned geranium, hakonechloa macra "aureola," a few centaurea dealbatas, and some "chocolate chip" ajuga, as you can see in picture 3. 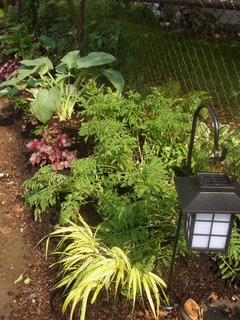 Sadly for Regina, a permanent home there was just not meant to be. I decided that her silvery foliage makes her just too "pretty" for that spot. I want darker. I want more dramatic. If I am putting a purple-leaf plant somewhere, I want a PURPLE leaf plant. None of this taking the edge off the purple with a silver overlay stuff for me.

So why don't I just do what I have considered doing a hundred times and take all three of the girls over to my Mom's house, where pretty plants like Regina would feel much more welcomed?

Frankly, I don't think I'm quite done using her just yet. Tonight I moved her to the sunnier front part of this strip bed, so she can strut her stuff amongst the perennial grasses and winter sown black hollyhocks. After all, it will be a while before the hollyhocks and grasses fill out their part of that bed... and maybe then Regina can move on to a better home and really put down some roots!

In case that ever does happen for good old Regina--and I'm pulling for her, here, really I am--I will definitely need a similar nomadic replacement. Any suggestions? What's your favorite plant nomad?
Posted by Unknown at 9:28 PM

Thanks for stopping by my blog today.

I am thinking you probably want 'Obsidian' heuchera for your dark purple. (If you were my neighbour, I'd gladly trade you one or two Obsidian for one or two Regina. I've never even seen Regina around here.)

Obsidian is a deep black-purple with rounded leaves. The other one I have (whose name I have lost) is a uniform dark reddish purple, like red wine. It has slightly sharper, more serrated leaves, almost like 'Palace Purple', which is a uniform brownish purple with very sharp leaves.

I'm constantly moving Hostas around. They don't mind too much, and I'm constantly playing with compositions of texture and height and variegation. They are so forgiving.

Thank you, Karen--I was just wondering whether "Obsidian" was really the darkest and most dramatic one. I believe that I will try it and see what it does. I admit that I didn't like the Palace Purple so much, but I think it's because it was too hyped up as the "next best thing," if that makes sense.

By the way, I'd gladly make that trade if you were closer! :) FYI, I got my "Reginas" from Bluestone Perennials but I'm not sure what kind of shipping you'd pay up in Canada if they ship there at all. It might be worth checking out as they really are pretty, little, and easy to tuck just about anywhere.

meresy_g, I'm just starting to do that with hostas--I've been timid about moving them, but from your post it sounds like I probably bought into their "fussy" reputation a bit much. Hmm...