Last year, I found a small local nursery that had a ton of unusual plants. It's little wonder that it is no longer in existence, as every time I was there I heard customers asking for Black-Eyed Susans (shudder) and "those purple flowers my neighbors have" while the unusual plants languished unloved and unasked-for.

I took advantage of the resource while I could, especially as the plants I wanted weren't hot sellers and so were often marked down. Amongst the treasures that I found and purchased there were several gallon-sized pots of Tiarella "Crow Feather," baptisia australis, and the crambe maritima (sea kale) that you see in the first picture. It's the one with the glaucous, ruffled blue leaves and it is supposed to show off sprays of white flowers like baby's breath when it's old enough to bloom. Oh, and if you want, you can blanch the leaves when they're young and eat them, too. 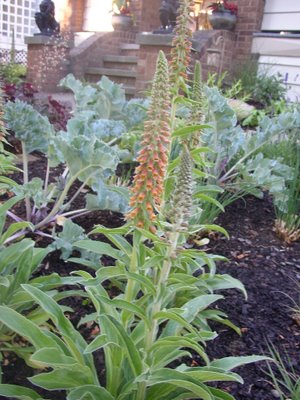 The sea kale is slow to emerge, so I have it interplanted with chives... but I'll be better at deadheading the chives next spring so I don't have to cut the whole plant down as you see I did this year. The green chive foliage really fills in nicely between the sea kale.

In front of the sea kale you see several of the dozen digitalis parviflora (Spanish foxglove) that I bought at 99c per pint container. It's supposed to be a perennial type of foxglove and would probably like more moisture and shade than it's getting in this sunny herb bed but it's blooming just the same. To their right you just see the Little Bluestem rass starting to grow tall, and behind that are nasturtium sprouts that will fill in the blank space--I'll have to start those earlier next year, too. 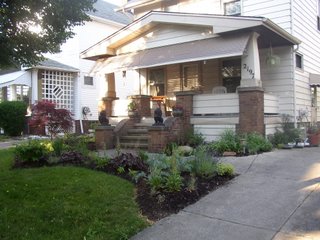 Overall, I don't really know what you would call my front garden design... "funky lakeside prairie" maybe? All I know is that those two crazy lions guarding the front steps aren't as prominent as they were when I moved in. (The Japanese maple on the left marked the front edge of the garden beds then.)

I may need to add more grasses, though, now that I think about it. More prairie/savannah might just make the lions feel even more at home in my otherwise urban front yard...
Posted by Unknown at 9:11 PM

I love the stone lions and the japenese maple.I will need to go bargain hunting soon, but thats fun trying to get a bargain!!

How long have you had your foxgloves? I can't get them to grow in my yard. Any tips? I really like them and would love to get them to love me.

Thanks for visiting my blog! I do love treasure and bargain hunting in general, but especially at nurseries. :)

Hanna, I bought the foxgloves last year, so they overwintered as small fry and were moved this spring to boot. This is my first time with them so I feel unauthorized to give you any advice. I will say that I had them in full sun last year and most still get at least 3 hours of sun (noonday) in their new homes. They seem to love the sun but I have to watch them regarding drying out.