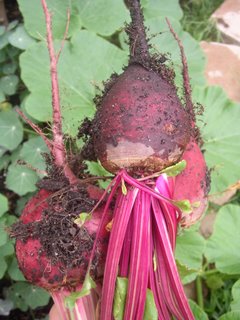 These beets are "Detroit Red." Not quite as delicious as the "Yellow Intermediate Mangel" that I've grown for the past few years, but I had decided to branch out this year. As I checked the beets to see which ones were large enough to pull and share with a friend tonight, a memory from my childhood made me grin.

I grew up surrounded by farmland in the western half of Ohio--farmland for which the old Black Swamp was drained, hence my display name. Mom was a factory worker, and occasional layoffs would happen during summertimes when orders were slow. She didn't seem to mind the timing of these layoffs at all, and her three children definitely looked forward to spending the occasional summer with Mom.

One spring, when my youngest brother Jeff was just finishing kindergarten, we were informed that Mom was probably going to be home with the three of us again that summer. Craig, the middle child, practically bounced out of his seat: "Cool! Can we have a garden, then?" The parents exchanged surprised glances but promised to consider it. The following week, we made veggie wishlists while Dad tilled us up a square bed of our own.

Craig, Jeff and I carefully sowed our chosen seeds: corn, tomatoes, pumpkins, zucchini and peppers. Mom and Dad, knowing that we would be impatient for results, added seeds for a few early crops like green onions, radishes, and carrots. None of us kids had the palate for radishes or green onions back then, but we were excited to see them appear, dutifully tasted one each, and were happy to leave the rest to Dad to devour.

The carrots came next, followed by the heat of summer, and we watched the garden put forth lush growth all through June. One day, in early July, we were finishing dinner when one of the boys looked up from his mashed potatoes and announced, "Well, the corn's not quite ready yet."

Anyone who grew up in farm country can tell you that corn is only supposed to be "knee high by the fourth of July," so his statement was only surprising for its obviousness. "I know that," Mom answered slowly, one eyebrow raised, "but how do you?"

"Oh, we checked today," the other brother piped up, prompting a solemn nod of agreement from the first one. "We pulled up a couple of stalks, and there ain't nothin' down there yet but a whole bunch of white roots!"

Mom, Dad and I burst out laughing... and the puzzled looks on the boys' faces only made us laugh harder. We just couldn't help it. "Good thing we said yes to planting a garden," Mom finally told Dad when she could gasp enough air to talk, "God forbid our boys grow up thinking that corn grows under the ground!"

Well, of course they thought that was the right way to check for corn after pulling up the onions, radishes, and carrots. They didn't know anything about corn except that somehow those tall fields of green stalks produced the uniform yellow kernels that showed up on their plate--and even that little knowledge probably put them far ahead of most city kids!

A trip out to the garden after supper set the boys straight on what to expect from all of the plants that were still growing. But I still think of their "mistake" when I see stories about programs that teach inner-city kids about how their food arrives at the grocery store. They are wonderful programs, and it really is important that people know where their food originates.

I am happy to report that the two little towheaded boys who pulled up cornstalks one July to check for mature ears have come a long way. One grows lovely houseplants in his apartment, and looks forward to the day when he and his fiancee can have a large yard of their own. The other lives with his new bride in a rented house and grows as many veggies and herbs as he can in the small garden bed that his landlord approved--and added a large containers to the back porch when they decided that still wasn't quite enough room to grow.

And as far as I know, neither one still thinks that they can grow corn underground. :)
Posted by Unknown at 5:22 PM

Really cool story blackswamp girl, even about your blog name.I love the fact you gardened as a family, and have all run with it.Made me laugh about the corn but in inner citys they think veg grows ready packed and washed.Even in the UK some inner city children have never seen a cow or sheep in the countryside.Thank god for the education programmes.There will be gardeners amongst them if they can be shown how to grow things..

A lovely story, Kim. I would be willing to bet that even "master garderers" have made mistakes of that sort. God forbid we should ever lose our curiosity! A while back I saw a school program somewhere in the north where the kids were taken hunting. Even there, a lot of the kids got their meat from the grocery store--wrapped in plastic, Thank-you Very Much! No doubt, that program is no longer offered because of overly cautious administrators/parents/other nuts who feel it's too dangerous or too gruesome for young minds.

This story was such a perfect blend of humor, nostalgia, innocence and food for thought as well as for the table. It was cool of you to share it.

So what are you going to do with the beets? Roasted, sliced with onions, beet soup? As you can guess, I'd love me some of those.

What a great story! Thanks for sharing with us.

A-maizing anecdote Kim. Brought a smile to my face as I pictured the innocence of your brothers. I'm guessing that they have since been set straight and realise, as David mentioned, that corn grows in packets in the freezer section of the local supermarket!

As a side note... both of my brothers had forgotten this story entirely until I told it recently. They didn't believe it until after they had asked Mom about it later and she backed me up! They were both horrendously embarrassed... lol.

Snappy, I agree--hopefully there will eventually be gardeners among them if they learn to grow things when they're young.

Kati, like you I bet that program no longer exists. Very sad that we feel we have to "protect" our children from the origins of their own food... and, frankly, the creation of a hot dog is probably a whole lot more "gross" than hunting.

Thanks, Annie! I cut off the greens and sauteed them in a tiny bit of olive oil with several cloves of minced garlic. I sprinkled the greens with a bit of grated asiago cheese and ate them while the scrubbed, cubed roots were roasting in a little more olive oil. Half of the roots were sprinkled with sea salt and cracked black pepper and eaten warm, and the rest are going into a cold salad tonight.

I really want a recipe for a good cold beet soup... but they just rarely seem to last long enough for me to have time to find one!

Kasmira and Stuart, glad you both enjoyed the story. Stuart, thank you for making me grin--I don't know how I ever got through relating the whole story without trying to slip "a-maize-ing" in there, myself! lol.

That was a great story I always spend my time in the garden as a haven so I actually try to keep my family and friends away from me, when I was laying new turf one of my friends helped me with some of the heavy digging and unloaded of the turf but after I could not get rid of him but the help was welcomed and now I have a great lawn that adds to the overall feel of my garden.

Wonder how I missed this the first time around? It's a wonderful story!