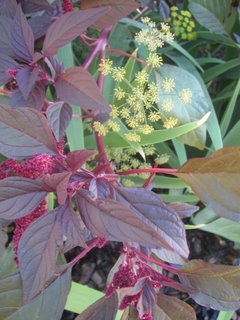 We occasionally get strong Lake Erie winds here in the northern Cleveland suburbs, sometimes gusty and sometimes sustained. On Friday, I came home to find that gusts had knocked over some of my most top-heavy 'Hopi Red Dye' amaranth plants. Stems were twisted and broken, and the upright panicles were horizontal to the ground.

Yesterday, I cut down all of the broken pieces along with those top-heavy stalks that remained upright but looked rather shaky without the support of those stalks that were culled.

All is not lost, though... as you can see in the first picture, some of the remaining stalks still have small flowers. In this pic they're combined with the yellow umbels of bronze fennel and the swordlike foliage of irises in the garden.

I liked this combination so much that I brought a bouquet of fennel and amaranth inside and loosely arranged it in an old milkglass vase from my grandma. I got two pictures of it before my camera batteries died and I discovered that my backup set hadn't been recharged yet from earlier in the week. Argh. 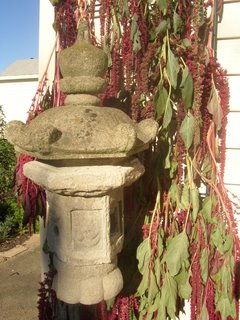 I'm not sure how decorative the amaranth will be when it dries, but on a whim I tied the cut stalks to a recently trashpicked metal trellis to dry. The trellis sits behind the Japanese lantern that I got for just a few bucks when a local garden center closed down, and it adds some much-needed color to the boring beige garage there.

I'll find out how well they dry (or not) when I get back into town later this week--I'm going out of town for several days to attend a conference for work. Maybe when I let you all know how they turn out, I can finally post those bouquet pictures, too! See you all in a few days...
Posted by Unknown at 8:33 AM

You know how to make use of things that others would throw out. I've got my eyes open for deals like your lantern, but I haven't noticed a lot of bargains on anything of good quality.

Your photos always have interesting textures and colours.

I'd love to have a Japanese lantern like that.

Hi, Amaranth is a wonderful plant. I have them selfseeding in the garden, a red one.
And I have also green and orange one, but they do not selfseed.

Sigrun, I can't wait to see what seeds in my garden next year from the amaranths! :)

Karen and Melissa, thank you both for the compliments. You can see this a little bit in the bottom of the picture, but the rebar reinforcing rods that run through the base of the Japanese lantern are somewhat exposed, hence the great deal on it--especially since the garden center was losing their lease and closing for good. I just got right place/right time lucky!

I have one plant of the Hopi Red Dye Amaranth. I got the seeds from a friend, and I pinched out the tip when it was about 2 & 1/2 feet tall. It is pretty cool, it branched out and is a fountain of firery red. Her's reseeds all other the place - so I am looking forward to that too. I have some green amaranth - but no orange . . . I have a young bronze fennel - not yet flowering. I like how you paired them. Thanks for stopping by my blog. Your pictures are great!

Thanks, Harvest! I'm going to try your method of pinching out the tip next year... "a fountain of fiery red" sounds exactly like something I'd want in my garden. :)

Oh, and I already have reseeders--when I cleaned out the broken ones I found a few 6 in. tall seedlings in the ground beneath them. I can't wait to see what comes up next year.