Obviously I didn't learn my lesson about moving plants in August, because I was at it again tonight. I'm trading two of my extra hosta for starts of two (or maybe three) from the large plant bed at work. I'm excited, because I am getting a chunk from the huge 'Sum and Substance,' the shapely and upright 'Krossa Regal,' and maybe even the small, rounded, satisfyingly dark green hosta that I have yet to identify. 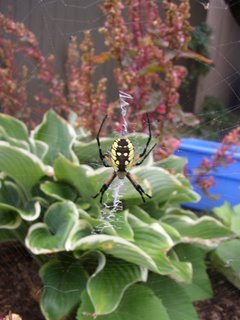 I was digging up one of my trades when the cuff of my jeans snagged an anchor of a very large spider web. This poor girl got taken for a ride as my careless step caused her to swing back and forth... I marveled at how strong and elastic her web proved to be. It even stood up to my clumsiness a few more times when I brought the camera back and began to circle her, looking for a good shot.

She's a common garden spider, and I remember reading in a recent blog posting that she's a black-and-yellow orb weaver, argiope aurantia. (I wish I remembered who blogged about her, so I could provide a link as well as go back and read it myself, but I'm just not that sharp tonight.)

I say "she" when referring to this spider because the females grow quite a bit larger than the males, who top out around 3/8 of an inch, and this spider's body was almost 3/4 of an inch. With her legs included, she easily measured 1-1/2 inches or more. 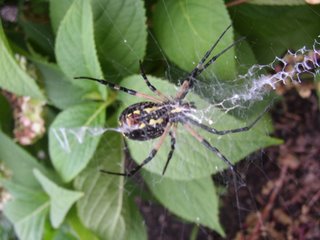 I never did get a great shot of her from the front, but if you want to see a really wonderful close-up view, check out this one that Yvonne posted last week. The pic of her underside is neat, though... her markings are even more intricate there.

What I found fascinating in researching them online was that they have 3 claws on each foot to help them handle the silk while weaving--I never really thought about spiders having claws before.

She's not as threatening as that sounds, or as she looks, though. Their venom does not really affect humans and they will only bite people if they're being harassed. They catch everything from aphids on up in their webs, and have even been known to take out a grasshopper or two. Spiders generally make good garden allies, so I'll be leaving her anchors--er, the dead sunflower stalks--standing until she leaves or is eaten by the birds!
Posted by Unknown at 10:55 PM

Nice photos. We seem to have an abundance of orb weavers this year...lots of rain driving them close to the houses. Usually, they weave their webs across the game trails so you take a stick with you when you go for a hike in the woods or wind up with a web mask!
What's the pink stuff growing in the background? Brooke

The electric blue is the trusty rubbermaid bin that I use to lug darn near everything in the garden--I dropped it right there when I found the spider. The pink stuff is my ruby orach/mountain spinach--the seeds were from Seeds of Change, and you should be able to find them on that website.

They were a lovely burgundy color up until a few weeks ago; now they are turning pink and then wheat-colored. Edible, too, although the younger leaves taste better than the older ones. I'm trying to dry some of the seedheads to see whether they make good dried flower arrangements or not, and I'll let you know what I find. :)

I have a lot of those spiders too. I've read that the zig zag in the middle has some kind of ultraviolet substance in it that stands out to birds, so they don't fly through the web. The zig zag is always the first thing I see, never the spider.

They get nightmare-huge in Kentucky~ I know because I came across some in a patch of high grass along our neighborhood creek ~ didn't see them till I was right up on them! Bigger than anything I'd seen out of a zoo.

You can bet everyone in the neighborhood heard me when I found 'em.

Your generation of gardeners are sure not like Miss Muffett, are they, Kim! I love it that you-all run for the camera instead of for the bug spray!

Very interesting. I've been noticing a lot of intricate webs too, wondering how to photograph them. The naked eye 'sees' more than the camera at times. I was tempted to run inside for a misting bottle, thinking water on the webs might make them more visible.

Stopping by to say hi. Very interesting photos and information.

Sory, but I do not like spiders. In my kitchen downstairs I found a black big one in the water basin. Grr.

meresy_g, thanks for the info! I hadn't been able to find info on that area so I was curious as to what it was.

Christine you are like my friend Meagan. Well, maybe not--she might be too paralyzed with fright to scream!

lol, Annie! Maybe I should be more concerned sometimes?!

Kati: I had thought about that, too. I also tried to figure out what I could put behind the web (since it was relatively accessible) to make both spider and web show up better. I needed a huge leaf or a panel of wood painted some dark charcoal color that wouldn't hide the spider's black markings but would show the light webbing. If you figure out an answer, please share!

Thanks, Karen, but I have a long way to go to catch up with your wonderful photography and gardens! :)

Sigrun I love spiders in the garden, but I do sometimes jump when I find them in the house! Then I have to escort them back outside!

Aaaaaaaaaaah! Spiders! We've had this whole immigration wave of spiders in our backyard this year- so many more than the previous 2 years. Those are some big ones!

I'm quite happy with spiders outside unless I walk into a big web. Ugh-- nothing worse than feeling that sticky silk all across your face.

Boy that is a scary looking one! I have a few sunflowers myself I hope they don't hang around mine. The stupid squirrels bite the tops right off my sunflowers though this year very upsetting. Your blog is looking great. Good luck to you!