The Surprising Results of Moving Plants in August

Let me preface this post by saying that yes, I KNOW you're not supposed to move plants in August. I know that moving them in late summer adds insult to injury because of the usual summer drought/heat combo.

I know all that, but it was nice and rainy--the unending, misty drizzle that plants seem to especially love--and around 70 degrees last Saturday. I'd been bitten by the fall cleanup bug, the weekly forecast showed daily rain, and I had some ideas on new locations for several plants so I decided to go for it anyway.

I dug with abandon, removing the centaurea dealbata that has been a marked plant for the past year. I transplanted 3 pennisetum 'Hameln' that were Bluestone Perennials purchases last fall, many clumps of chives, a couple of golden sages, an unnamed hosta, 'Crow Feather' tiarella, European ginger, and *gulp* 3 'Hillside Black Beauty' actaea--formerly known as cimicifuga. 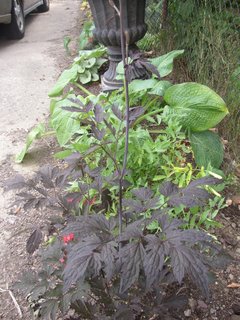 I really expected that if anything sulked or gave me trouble, it would be the HBB's... just go to any gardening board and ask about moving the actaea/cimicifuga clan and you'll get replies from a bunch of Chicken Littles about how the sky will definitely fall if you try to move these plants at all, ever. If I sound less than threatened by these prophecies, it's because I've moved all of mine several times in the past few years with absolutely no consequences.

I have had no problems so far this time, either, as you can see from the first picture. The promised rainfall never materialized this week, so I did water them twice when the flower stalks started to droop a bit. 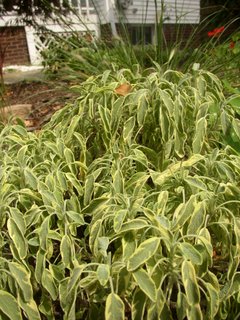 What really surprised me was the reaction of 'Icterina,' the golden culinary sage. I checked it out Sunday and found the leaves all hanging straight down! You can see in the second picture that the leaves are still droopy--and this is after watering 2x daily for a whole week!

I know that I got a huge chunk of the rootball, and I actually moved it into slightly less sun than it had previously enjoyed... so I'm really not sure to what factor I should attribute its sulkiness. I'm just surprised to find that behavior in an otherwise tough sage. After all, I hadn't been worried about moving this one at all!

Is some sort of Murphy's Law of Moving Garden Plants in effect here? "Murphy's Law of the Garden #113: "The plants you are hesitant to move will bounce back just fine, but the ones that you assume will easily survive transplanting will try to die on you."

There's probably another corollary to that law, now that I think about it. One that says something about how if all other things are equal, the plant that cost the most will be the one that dies. I think that's happened to me a few times in my old garden. Good thing I got my HBB's for cheap during a Wayside Gardens sale, or they might have been goners, too!
Posted by Unknown at 1:25 PM

I love the murphys law of gardening.which is do things against common advice and see what happens.Like splitting a rosemary bush in may, growing tomatoes six weeks late.Posted you a slug pin up for your collection.He is a single specimen looking for love, and the upside down mile high club.

Ha...glad I'm not the only one looking to rearrange my garden "furniture" this time of year! I'm lucky to have cool nights in my favor to assist the process, but I think it's still luck of the draw. I have had an increase in sucess by watering with Schultz "Starter Plus Root Stimulator"-liquid stuff I got at Walmart. You mix it up, and even if the plants/trees seem pissed, they usually get over it pretty quick. If I get only roots and no dirt, it has helped to dip them in rooting hormone powder before planting, also. Did that with some Virginia Creeper cuttings from my mom in April-looked like dead wood until June-then leaves! Patience (a.k.a. laziness) is key here.

Laziness... Lisa, I can definitely do laziness! lol. I agree, it does really seem to be a crapshoot as to which plants are going to be just fine and which are going to sulk. But seriously... sage?!?! I was shocked. :)

Doesn't sage like free draining soil? If the soil is less well-drained where you moved it, all that watering may be doing more harm than good.

The soil is still well-drained there... part of the reason my herb garden is in the front is that it's dry, sandy soil and herbs offer enough color and lushness in that kind of soil to satisfy my aesthetic requirements for a front-yard garden.

I really don't know what it is, but the sage still wilts in the midday sun (it used to get full, all day sun!) and then perks up again at night. I hope it makes it through the winter! At least I'm only looking at buying a $1.50 herb pot next year if I have to replace it, though, right?

Ah..but it's not the cost, but the victory, now isn't it? I have often asked myself why I don't just buy some thing new, rather than suffer through various propogation trials...it's the hope of triumph/sucess, for sure!