My gardening friend Dave promised me a magical rose microclimate when I first told him that I was moving to Lakewood. "We don't have any luck with them down here, but they can grow beautiful climbing roses up there by the lake," he remarked. "You'll have to give them a try." When I moved up here, I noticed that he was right... and all this year I have been working around in my yard with an eye toward where I can put one. Or two. Maybe even three.

Thanksgiving Day is not the best day to take photos of roses in Zone 6. However, it had come to my attention that there are some unbelievers in the garden blog world. Those who have the audacity to snicker at references to my lovely Lake Erie microclimate. And I just couldn't wait until next June to offer proof and urge him--er, them--to repent. So here is a picture of the lovely climbing rose that Coco and I pass every morning on our walk: 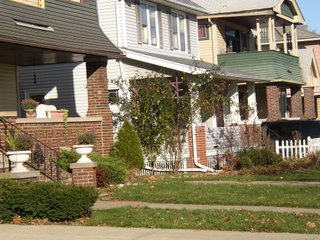 From early summer on, it offers repeat yellow flowers and bears golden orange hips in the fall. You could see both flowers and hips better in a closer pic, but remember that I was shooting on the downlow. "I saw my shot, there was no danger, so I took it."

The picture shows what it needs to, in any case. In most of Ohio, which generally qualifies as some degree of zone 5, you just don't see climbers get this tall because there's too much winter dieback. Here, thanks to the magical influence of Lake Erie, we can grow monster climbing roses. The one in the picture above was actually topped off in October, and it's still reaching for their porch roof!

I tend to be mostly methodical in my plant purchases, so I started doing a lot of research on roses. I wanted roses that are hardy, have nice foliage/form/flowers, and are also fairly disease resistent without much spraying. I knew that I wanted a small climber to grow as a pillar rose in the backyard as well as a slightly larger climber for the front porch.

Through various books, I found a small yellow climber called 'Leverkusen' that seemed to fit the pillar idea and also was lauded as "amazingly disease-resistent, for a yellow rose." I had already pretty much decided to give its red, more vigorous cousin 'Dortmund' a try as well when I happened to leave a comment on Barrie's blog, asking his opinion. If you have not yet visited GardenMob, go now. Barrie knows his stuff, and he's entertaining as hell to boot. I was honored that he humored me by posting a review of 'Dortmund' there, and slightly relieved that he deemed it to be a decent choice.

Barrie, Henry Mitchell, and every retail source I've found for 'Dortmund' notes its lethal thorns. I'm with Barrie--I think that they'll just add some interest to porch parties. And I'm a girl who likes a little challenge, anyway. It will be fun to liven up the garden with a little plant adversity!

All of the above is enough to justify planting 'Dortmund' in my front yard, but after reading this glowing (ahem) compliment from Henry Mitchell in "The Essential Earthman," I was completely sold: "'Dortmund,' one of those modern German roses, is sufficiently brilliant to kill the color of any iris yet known to man."

Sweet. Now that I think about it, I have a place next to where 'Dortmund' will go that I bet would be perfect for some iris...

My guess is that you're planning on planting some deep purple iris next to the 'Dortmund'... am I right?

Please be sure and post again next spring/summer about this. (As a Zone 5 guy, I'm going to give this a try.)

Maybe! I have some dwarf Siberians that would go nicely in front of the rose--I had been looking for something grassy there anyway. But maybe I should see how 'Dortmund' would stand up to something even bolder, like a variegated canna, instead?!

Will do, Clerk... I have already ordered the two roses from Antique Rose Emporium, and will be planting them in the spring.

I'm also looking forward to seeing your pictures of these roses in flower!

Blackswamp Girl! Thanks for the visit and comment about the CVNP which led me here to this great blog! Hello neighbor! (Anyone in the half-hour zone is a neighbor.)

I will be anxious to see photos of your roses, also. I started some, then abused them by being away too much. I wonder if the Lake's warmth goes this far south? I have seen some pretty tall roses in these parts!
Kristen at White Light of Peace

Heh...so you're setting up a "Clash of the Titans" with roses and irises? Cool....give em' hell! I'm just a tad jealous of your microclimate (despite my love of snow), I saw a lot of monster-sized rhododendrons/azelias in Wooster, Ohio when I did a travel job there Jan. 05'. I look forward to your pics next summer!

hi lisa up there above me in line.

i love this post, and i wish you only the best of luck. it's good to see such great attitudes from the northern gardeners - all up the sipping tea in your cozy cottages i bet. your grandmother, by the way, has a twisted sense of humour > mushrooms indeed. i bet she's awesome.