When the Garden Bloggers' Book Club picked "My Favorite Plant" by Jamaica Kincaid as the December selection, Carol announced that if we didn't have time to read it we could instead post about our favorite plant. Knowing that the seasonal business in which I work would keep me too busy to read at this time of the year, I was happy to have an alternative... but the thought of picking out a "favorite" anything filled me with dread.

Ask me what my favorite color is and I'll say something like, "Blue. But the right shade of blue, just before it gets so dark at night that the sky might be considered black instead. Or maybe an electric cobalt. You know, a rich cinnamon brown is good, too, now that I think about it..." Ask me for a Top 5 albums of all time list, a la High Fidelity, and I'll cheat and throw in some boxed sets. It's not really indecisiveness, because I have a good idea of what I like and don't like. It's just that I like a lot of things. 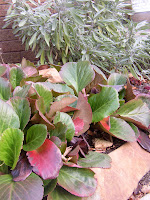 True to form, I have found that I cannot pick just one plant as a favorite. Instead, I'm taking 2: Sage and Bergenia.

Just saying "sage" is cheating in and of itself, because the genus salvia has so many species contained within in that entire books have been written on salvias. So let me clarify that my favorite sage is salvia officinalis. I like its soft, felty leaves, even when those on the underside of the plant start to yellow and die, and I appreciate its irregularly mounding habit. The only cultivar I really don't care for is 'Tricolor,' for some reason. 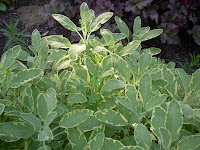 I also appreciate it steeped in a mug of hot clear water with a little bit of local honey... and I like it burning and crackling in the firepit... and I like brushing up against it "accidentally" for a good whiff of clean, bracing sage-scent as I wander around the yard. You get the idea.

Bergenia just makes me smile whenever I see it. When I found out that its common name, "Pigsqueak," came from the sound you get when you rub its thick, glossy green leaves between your thumb and forefinger, I was hooked. I regularly stoop down and make my bergenia squeak when I walk past it. And yes, I then grin like a 4-year-old who just discovered that he can make embarrassing noises by squishing his hand in his armpit and pumping his arm up and down. There, I admitted it! 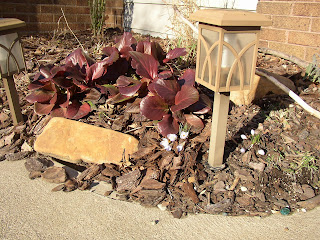 In terms of garden design, you can't ask for much more than its handsome foliage that tinges red in the fall and turns dark purple in the winter. The dark leaves set off early spring flowers like crocus amazingly well, and add wide, chunky texture to summer and fall vignettes. Unlike some evergreens that ask nothing of you at all, you get to pull off dead leaves from the bottoms of the clumps every now and again. That sounds like a silly thing to include in a list of assets, but I firmly believe that there's nothing like taking a bit of care of a plant to help you form an attachment.

So there you have it. After 20-some days of careful consideration, I managed to narrow my favorite plant down to two. That is, the two that are my favorites this month. Well, for this winter at least--I forgot how nice the blueberry leaves looked in November, now that I think about it. And how could I have chosen between all of the grasses I like, really? Hmm...
Posted by Unknown at 11:18 PM

Impossible. It is an irrationale concept: favorite plant. That's like asking a guy to pick his favorite dog... out of his whole life.

(You clearly gave it a valiant effort though.)

Kim,
I did not know that was why Pigsqueak is called pigsqueak?! Now I can't wait until spring to go out and try that. What fun. Great post, I'm also still trying to decide!

I'll be linking you in with the offical "club post" around Dec. 29th.

Clerk, thanks. I thought it was a valiant effort, too... and kind of had to make myself do it to see if I could whittle things down. Now I'm trying not to overanalyze myself and wonder what it says about me that I didn't pick something more drool-worthy, architecturally appealing, etc.!

Carol, I don't know if it really sounds just like a pigsqueak, but it does make a satisfying noise! Do wait until the leaves green up, though--I just tried to make the noise this morning and the plants aren't up to it right now. :)

I have been mulling over the 'favorite plant' topic, too. I can't come up with one, either.

Too many great plants.

The carryings-on that happens in the garden community! I laughed with a panicky sense of recognition -- I'd be hard pressed to pick a favorite anything as well. But then the comments. Is it just me, or does everybody have sex/or lack of it in the garden on the brain??

I'm with the clerk on this one. Always have had a problem with the concept of "favorite". It suggests, should I choose one, that I won't enjoy any other as much.

There are just too many wonderful plants, colors, winemakers, guitar players, NEA Jazz Masters, and bloggers. I can't deny myself, even conceptually, the opportunity to enjoy each and every one, at any given opportunity, to the utmost.

Sweet peas are my favorite!

Mmm sage! One of my favorite cooking herbs.

One of my goals next year is to make an herb garden.

Pigsqueak?! Now I can't wait til' spring to rub my bergenia! (sounds dirty;) Yea, no way I could choose a favorite, either. In fact, I couldn't even narrow it down as well as you did...maybe a "top 100"!

I've been trying to decide on a favorite plant too. Salvias are a top contender. Salvia greggii is one of my favorites.

Jenn, it took me SO long to narrow it down to just two, so I know what you mean!

Kati, I think that you are seeing everything through certain-colored glasses these days. Maybe not rose, maybe more like hot pink! ;)

Bruce, I am stealing your comment: "More hedonistic than indecisive, I like to think." Just wait until the next time my boyfriend accuses me of being indecisive!

GGG, I grew sweet peas for the first time this year and they were lovely.

Rurality, I can kind of be evangelical about herbs, but I am firmly convinced that you don't even have to make a separate "herb garden" if you don't want to. Herbs are so easy to tuck here and there, as most of them have good foliage. Go for it!

Lisa, you always make me laugh. :) Don't you love those plants, though? They're just beautiful year-round.

Bill, I just googled it--salvia greggii is one beautiful plant! I noticed a few cultivars listed hardy to zone 6 so I might try one of those next year myself...