Two Surprises:
This week's garden cleanup/planting spree has so far yielded two very happy surprises, both in the form of returning plants!  Check them out: 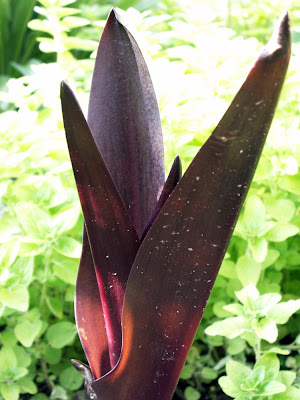 My emerging 'Sparkling Burgundy' Eucomis, from Plant Delights.
Most eucomis are said to be hardy to around zone 8, but PDN is very good about posting little notes like "at least," "possibly colder," "maybe colder, with good drainage," etc., on their plant listings.  These notes are based on the feedback of customers who have tried to bend the usual zone rules on a given plant, and encouraged me to buy a 'Sparkling Burgundy' to try in 2008.  I'm always pleasantly surprised when it returns... so maybe this will be the year it finally blooms for me, too?! 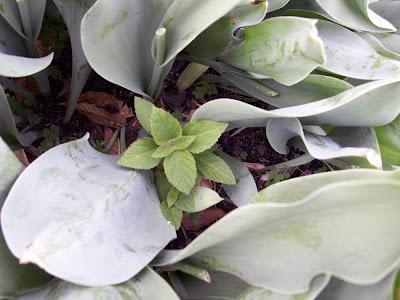 This one may be a returner, or it may be a seedling--I have no idea.  Either way, I'm delighted to have pineapple sage in my garden again, without having to replant it.  I'm equally glad that I found it before the little herb pot of pineapple sage that I had set aside at the garden center came home with me!

But it's been an unusual year.  It's not quite Memorial Day yet, and I already have a few garden chores finished.  The entire driveway bed has been cleaned up for months, I managed to plant lettuce on time for the first time EVER, and there's even a single happily planted--cage and all!--tomato ('Sungold') growing in a pot on the driveway.  All that progress gives me hope that the next two tasks that I am posting about may actually be completed this year.  You can see both of them in this picture: 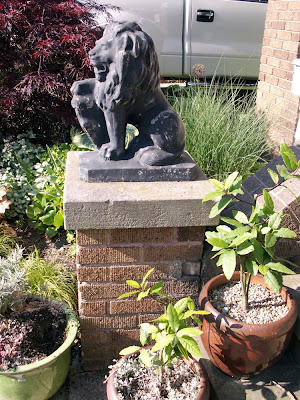 Task #1:
I really need to repoint the brick on my front porch.  Not all of it, but there are two places where the facade brick has chipped off... look on the right side of the column at the base of my front porch steps, third row down from the capstone, for an example.  (Luckily, I have both of those brick pieces.)  There are also a few places where there are deep gouges in the mortar that should be filled.

I've been reading up on repointing old brick, and back when this porch was initially made they would have used a soft mortar instead of the concrete we use now... and this softer mortar flexes better with the softer old bricks that were made before the 1930s.  Interestingly, you can use hydrated lime (yes, the same stuff that some gardeners use to sweeten the soil!) to recreate a similar mortar.  And since both of the bricks that popped out were in spots that had been previously repointed with cement, I think that I'm going to go the lime mortar route instead.

Task #2:
Also in the photo above, you can see how worn my poor lions look!  The once-smooth black paint has numerous spots of wear from their years out in the elements, guarding my house.  It took me a long time to come to terms with having to share my abode with these beasties, but now I love them and want them to look nice--and so, the lions require a fresh paint job.  The only question is, what color?  Hmm...
One Experiment
One thing that I love about working part-time at the garden center is that I get to talk with other gardening geeks.  I think I've mentioned the guy who grows pumpkin vines on his lawn, artfully rearranging them after every mow.  But the everyday people--the ones from whom I get things like lemon thyme vinaigrette recipes, and the idea to make pesto with sage and walnuts instead of basil and pine nuts (fabulous with thinly sliced apple and onion on a chicken sandwich)--are the ones who really make me happy.
So when a lady with whom I had been having an on-and-off conversation about various herbs, and who I had decided must be some sort of herbal goddess, mentioned that bay laurel does so much better in the ground here, I jumped on that.  "What do you mean?  It's not hardy here," I asked.  She said that no, it wasn't, but that she gets so many more leaves on her ground-planted bays than she does on her container-planted one.  No matter what sort of container she uses.
I'm not sure what I think about this idea, but... well, I've decided to do a little experiment to see whether this is true.  So check out my two potted bay laurels, which appear on the steps in the lion photo that I posted above:

Both of these bay laurels were purchased at the same time, grown in the same conditions, and have been in identical clay pots since 2008.  They are both approximately the same height, although the one on the lower step (planted with some dichondra way back in its infancy, as you can see) is maybe a little scrawnier.  That scrawnier plant is the one that I am going to grow in the ground, and the slightly fuller one will be my "control" plant.  I can't wait to see how this one pans out--hopefully, some of my foodie friends might be delighted with generous giftings of bay laurel at Christmastime this year!
Well, I was going to post a few gratuitous photos of the rest of the gardens... but that will have to wait for tomorrow instead.  Have a good night, everyone!

Maybe I need to work part time at a Nursery. It would be fun to have garden geeks to chat with. You could learn so much. As to zones and plants, my Sister has Black and Blue Salvia that has reseeded itself in her garden. She lives in the same zone as I supposedly but she lives 58 miles south of me. She also has calla lilies that come back. NOT fair. I have had some cannas return a year or two but then we have a real winter and they expire. Good luck with your tuck pointing. You will do a good job no doubt.

Talking with gardening geeks is one reason why I blog and also why I attend Spring Flings. I am looking forward to the Bay Tree experiment~ I am in zone 7a and my pot grown bay is over 6 feet tall~He lives indoors when the temps go below 25 degrees and then back outside after that~He's almost too big to move around, but I cannot bear to lose him. What are your color options on the lions?

Greenbow Lisa, fair warning about working in a nursery: I definitely get some very dangerous ideas there. ("Wait... HOW do you fit all of this citrus and fancy tropical fruit into a little house in our suburb, without a greenhouse?") *grin*

Gail, color? The sky's the limit! (Well, as long as the paint color can be done in masonry paint, anyway.) Steve thinks that I should paint them to look realistic... I've half-joked about including some kind of glowing or reflective paint on just the eyes... :)