I'm a day late in posting my Garden Bloggers' Bloom Day roundup (hosted by the lovely Carol of May Dreams Gardens)... which is in stark contrast to how EARLY so many things have bloomed this year!

Last year, I was showing off a lot of tulip combos, and made note that my daffodils, red currants, blueberry, pulmonaria and tree peony were all in full bloom.  The currents have had berries now for weeks, and most of the rest of my 2009 May bloomers that are blooming for the May 2010 GBBD are mostly on their way out: 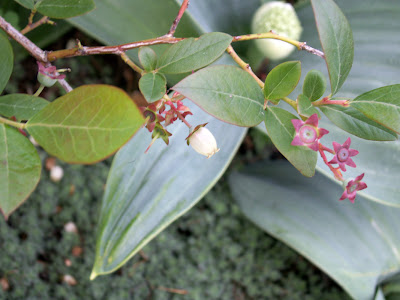 The last lonely blueberry flower, with white allium and woolly thyme in the background. 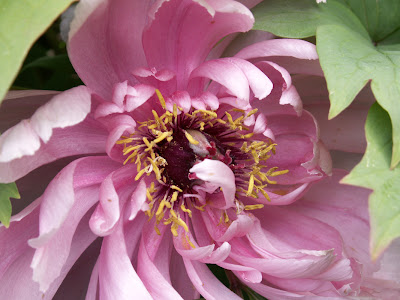 What's left of the blooms on the tree peony.  Doesn't this stripped-down flower look embarrassed about all of the shattered petals that lie at her feet? 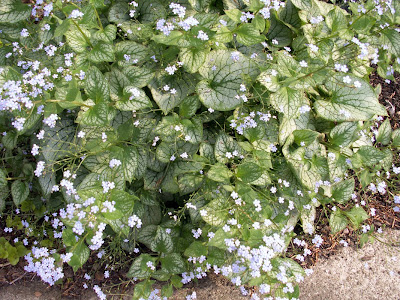 Brunnera 'Jack Frost' blooms are on the wane.  The younger 'Looking Glass,' which was newly planted last year, is just beginning.

A few things things appear to be right on schedule for their May bloom.  "Who cares about all of those extra days of warmth we've been enjoying," they seem to ask. I wonder if the nighttime temperatures maybe have more of an effect than the daytime temps on these blooms?  Here are the right-on-time plants: 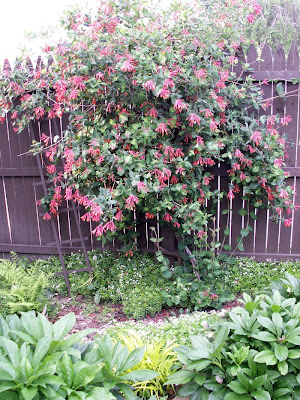 My lovely Loni and the adoring Sweet Woodruff at her feet. 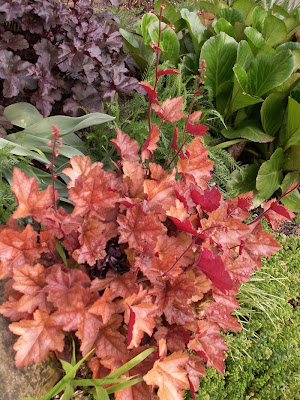 Various heuchera are in bloom/bud. 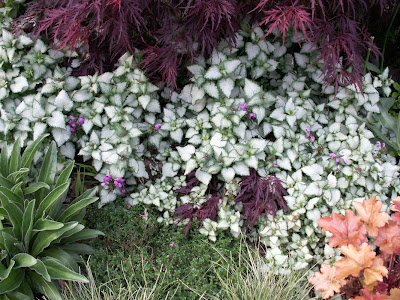 Lamium are also blooming in various parts of the garden.  Above: 'Purple Dragon' 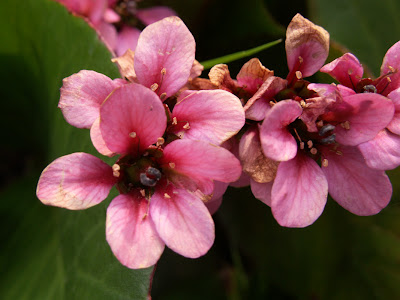 Bergenia flowers--they were all in full bloom at this time last year, but about half are finished already.
A few things are just a few days ahead of their 2009 bloom cycle, but in a good way.  It's kind of fun to see some of them make a bloom day post for once, instead of blooming in the "no man's land" of time between GBBDs: 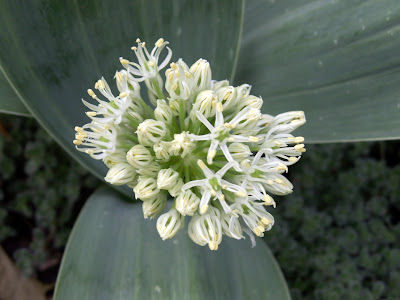 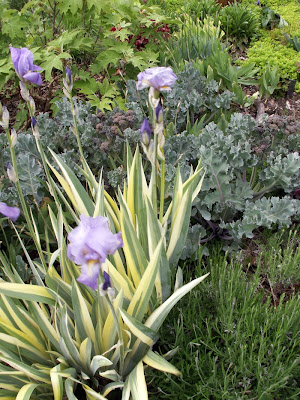 The stolen passalong variegated iris from my grandma's garden. 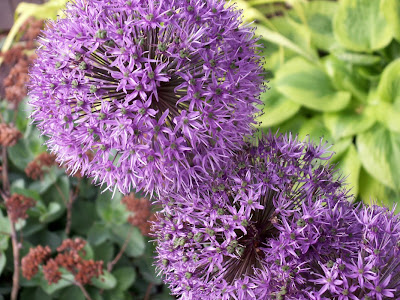 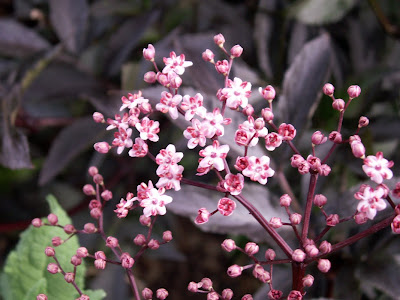 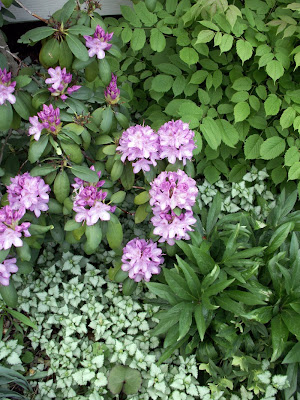 My inherited rhododendron, which is now completely covered in blooms. 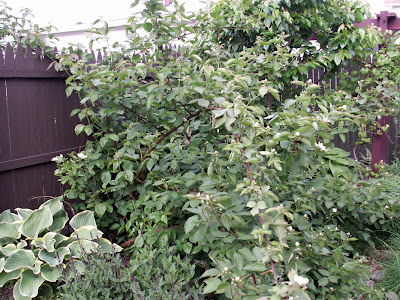 My blackberry, also now completely covered in blooms (YUM!) but just starting in the photo above.

And there are a few brand-new-to-my-garden bloomers, too.  This list includes: 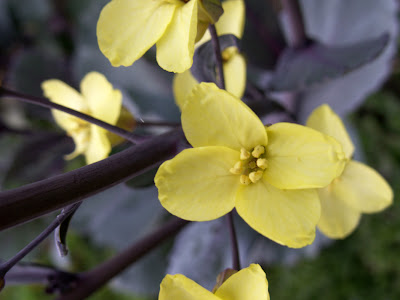 Flower stalks from the red cabbage that I forgot to harvest last year.  They're so lovely that I think I'm going to do late harvests, and allow the second year plants to seed, every year! 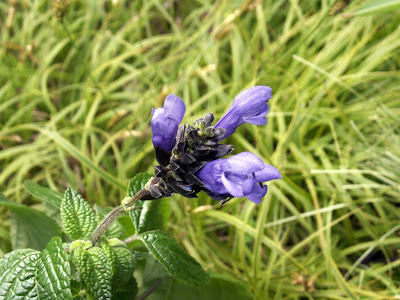 'Black & Blue' salvia guaranitica.  I usually buy this too late, and plant it even later, to get much of a show.  That will be different in 2010!

'Samobor' geranium, 'Chocolate Chip' ajuga, my blue woodland phlox, and some of the small carex are in bloom.  A very few other May 2009 bloomers have inexplicably not yet begun their show--including culinary sage and chives.


To see what's blooming in other parts of the world, visit Carol's Garden Bloggers Bloom Day post for May 2010.  And with that, I'm off to sneak in just a little more gardening before the sun goes down!

Even though you are in a zone colder than my garden we seem to be on the same track. Don't you just love that Loni? I bet the hummers will find it. You have so many things they like. I will be sure to tell any just passing through that your garden is available.

Lots of beauties in your garden. I think it's neat that we both grow Salvia guaranitica, though I know yours is an annual. I'd grow it as an annual too if it weren't hardy here. It's such a great plant.

I love the striped foliage on the iris. Quite striking!

I was late with my post too, but I just decided to back date it :)

I think your passalong Iris is aureomaginata, which I have. Does it smell like grapes? Mine isn't blooming yet.

wonderful, I just posted 23 blooms. I so needed a garden tour when I got home

Wow! So many blooms, so little time! Reading & viewing your variety of perennials reminds me just how far I have to go. (whew!)

Kim, I let the kale flower and go to seed every spring...Beautiful yellow flowers are a nice reward. Love the elderberry~I saw that in the UK, also a great many dark leaved plants. Love the variegated iris~you can't beat great foliage and a charming flower!. (On the list). gail

Greenbow Lisa, I think that I am actually a zone 6 here, temperature-wise... but my springs are typically a little later, because the lake is close enough to keep me cooler longer. Thanks for pointing the northbound hummers my way! :)

Pam/Digging, supposedly the B&B can overwinter here in the right conditions. I'm going to test that theory this year and see what it does. Fingers crossed!

Thanks, Emily! And that's a great idea--I think I'm all for backdating next month. (Yeah, I know that I'll be late again.)

shell, it's a great groundcover but it can be a little enthusiastic for some people's taste! Mine is in a raised bed, so I have a built-in boundary so I know where to cut it back.

Mr. McGregor's Daughter, yes, it's aureomarginata, and yes it smells like sweet ripe grapes! (Similar smell to my cimicifuga 'Hillside Black Beauty'--do you grow those, too?) I love that smell, and can't wait to move these iris around a little bit, now that the "stolen" patch is doing so well. The foliage alone is awesome.

Shyrlene, I don't know if you want to aspire to having this many plants. In fact, I think it's a sickness... you may want to walk away now, while you still can! ;)

Gail, I ADORE my elderberries! I have both 'Black Lace' and 'Black Beauty' and I can't even decide which one I love more. (Maybe 'Black Beauty' at the moment, though... with more blooms, she's bound to give me more elderberries to enjoy later. lol.)

Putting lamium under the under that Japanese maple was a stroke of brilliance.