I know that I gush about a lot of a few plants on occasion.  I could wax poetic for hours on the delights of the oakleaf hydranges, heucheras, and sedums, for example.  But few other plants inspire the delight that my lonicera sempervirens, a honeysuckle native to the U.S., does.

This plant has a beauty and presence in the garden that few other plants can boast.  With such a vivacious personality, you know it was only a matter of time before she became one of the few plants I tend to acquire a proper nickname.  "Honey" seemed too sweet... but I remember watching M*A*S*H with my mom when I was a kid, and Loni Anderson played the blonde bombshell (with brains and a big heart, to boot) on a show that came on right after M*A*S*H.  So "Loni" seemed a much more fitting name for my garden beauty: 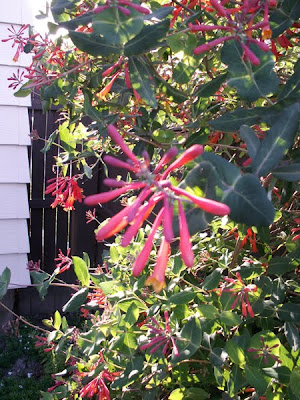 I occasionally take some of Loni's longest limbs and weave them in and out of the tops of the pickets.  Even without my help, she drapes herself elegantly along the fenceline: 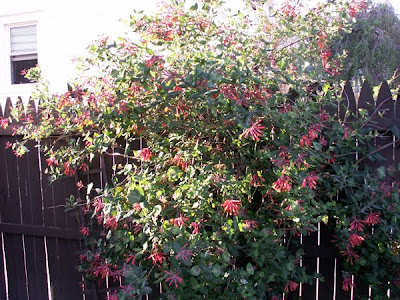 My favorite way to view her is backlit.  In the morning, when I look out my picture window, she is backlit by the morning sun.  In the slanted light just before sundown, she smolders: 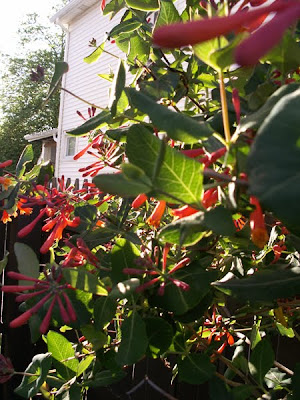 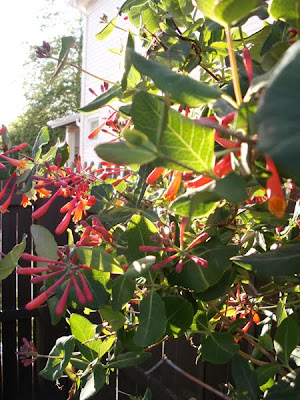 Even the leaves look amazing, with their blue-green shades in flat light, and the bright green glow that pops out with a little backlighting: 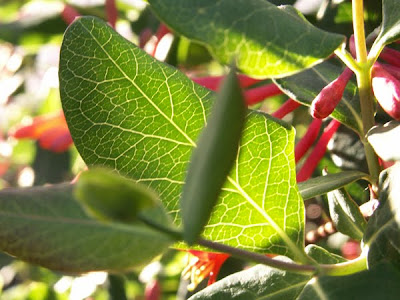 And on top of all that?  She's easy to grow, and doesn't require a fuss.  In fact, she's so perfect that you wonder what all of the other plants must think of her... and determine that even though they probably all WANT to hate her, and are a little bit envious, they can't help but love her, too.

A final warning:  This will not be the last Ode to Loni on my blog.  The number of blooms waxes and wanes throughout the summer, but... well, in spite of being a vine, Loni is not really a wallflower.  She isn't afraid to strut her stuff, and the show often lasts until the first frost.  Expect even more pictures as the show goes on!

Email ThisBlogThis!Share to TwitterShare to FacebookShare to Pinterest
Labels: lonicera

I have a Loni that is in my garden. She is an amazing creature. She had a little set back this year. I can't figure out why about half of her died off. Hmmmm says I. Despite what ever happened the half that is still here is blooming up a storm and the Hummers are happy to find her so.

Your Lonicera has inspired me to plant one. It's the perfect solution to a problem area in my garden. I don't know why I never thought about planting one, but your post about the blooms last fall got the seed planted (so to speak), and when I saw one at a nursery this spring, ding! This post has cemented my conviction. It looks like a winner.
(BTW - I loved that show too. "I didn't know turkeys couldn't fly!")

Nothing says summer to me like the smell of honeysuckle. I think I might have to find one for my garden. Beautiful photos, Kim.

Loni IS a garden beauty, Kim, and I'll be delighted to see her strut more stuff!

Great site, I think we can all learn something from your idea.this is fantastic looking blog.

I just almost this minute (last month) bought a tiny cutting of Major Wheeler for my garden at home! I have high hopes that she'll grow up to be as beautiful as your loni and bring me lots and lots of hummingbirds...

Window On The Prairie said...

I really liked your writing style. I'll definitely be back for more!

Your Loni is conducting an orchestra on the fence while mine plays chamber music on the patio arch, Blackswamp Kim -wow, has that Coral honeysuckle taken off! Any doubts that it would be happy in your zone are definitely vanquished!

Now you have me thinking about pet names for plants...already have a 'Hot Lips' salvia...should I call it Houlihan?

Wow, Loni really likes you too!

The one I planted in the shade at the edge of the woods took about 10 years before it grew big enough to see. Now it twines up through a wild Viburnum prunifolium and looks interesting (I think) with the clusters of red flowers peeking out here and there.

But the one I planted in the sun in the kitchen garden is unhappy this year. First it had a horrible infestation of aphids, which just shriveled the stem tips, and now the deer have nibbled on it.

I'll just click on over here now and then to see how good Loni looks.

This is another plant I've admired on your blog for many years. For whatever reason, this is not the honeysuckle sold in the nurseries I visit. Almost all of ours come from Asia and flower yellow. I will have to look into that.