Taking Some Pride in My Lions 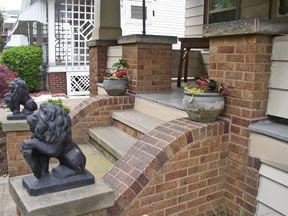 The first time I saw this house, my realtor and I both giggled at the lions "standing guard" on top of the pedestals at the base of the front steps. Front and center, they were the only bold, black features in a sea of brick, beige, and darker beige.

At that time, the small flower beds on either of them were buttoned up with retaining walls that were 2-3 blocks high. Combined together, the message conveyed was that this house (or at least its owner) took itself very seriously.

I loved the house and bought it anyway, fully intending to remove the lions and replace them with something more welcoming. Abundant, overflowing planters, perhaps. The retaining wall blocks came down quickly and groundcover sedums took their place as edging. I realized that the lions were not going to be evicted as easily, however, when two very strong guy friends--one of whom would later become my boyfriend--couldn't even get them to budge. 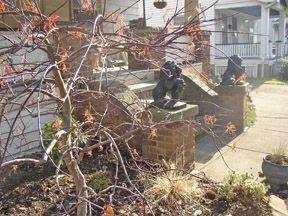 The lions may be relatively new to my house (according to one neighbor, they were put in around 2001) but they are fairly old. Based on the mark each one bears, they were poured in the early 1950s. I have a healthy respect for anything that is older than me, and a sledgehammer seemed like an unworthy end for such a noble guard anyway. So I did what any frustrated but sane person would do: I decided to ignore them until a good solution presented itself.

The lions quickly became a punchline amongst my friends, who knew how much I disliked them. I was surprised when I realized this spring that new plantings around the lions have softened their presence and made them more livable. The addition of a bed in front of the sidewalk and the use of darker foliage in the front yard beds makes them take a step back visually. They no longer seem in-your-face in the way that initially irked me. 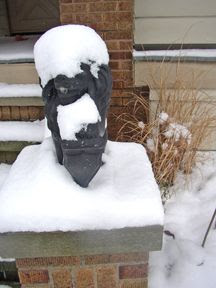 I admit that I have lately gone to greater lengths to make these lions look more at home. Lions are obviously not native to my sandy shores of Lake Erie, so I am amusing myself by creating a little faux habitat for them. To anyone else, my front garden beds just happen to incorporate a bunch of funky grasses... but when I see the grasses swaying in the wind, I like to imagine that my lions are enjoying their own little piece of stylized Erie shore savannah.

You might have already guessed that these guys are growing on me. In my defense, they have been invaluable in terms of directing people who are coming to visit me--not to mention how they help me find my own home on a daily basis.

So while they still are not anything that I would have picked out for myself, and I am a long way from choosing nicknames for these guys... well, I am no longer plotting their demise or relocation, either. I will leave their ultimate fate to the house's next owner, whoever he or she may be.
Posted by Unknown at 9:50 PM

I rather like your lions and the image of them prowling the shores of Lake Erie!

I love the lions! If you ever do decide to get rid of them, I'd be happy to give them a home.

We had the same dilemma with our last house as the previous owner had concreted a couple of cats near the doorway.

Neither Deb or I are big on cats (unless they cooked long enough) so we resigned ourself to the same fate as you have.

We ended up leaving and the cats are still there today...

Kim, I loved reading this. I found myself smiling as you talked about planting grasses so the lions have their own stylized savannah. I see those lions pretty often around here, and I think the same thing you did...these people take themselves rather seriously. I'm glad you found a way to work with them. When you do name them, though, be sure to tell us, okay? We'll plan an intervention ;-)

Hiya, I'm sure glad to hear that you have a healthy respect for anything that is older than yourself! I think your garden is looking very well, can't wait to see it in summer. ~Bob~

Like Colleen, I was smiling as I read about the little savannah you created for the lions. I'm glad you're having fun with them. Thanks for sharing.

Your lions are great! I also like what you've done with the entry way, as well. The retaining walls would have been on my demolition list, too.

At least you don't have a bunch of Italianate statues painted black no less in your yard. Some one in our neighborhood has a whole group of them in their yard. When I walk past the yard in the early dawn with my dog I feel like I've just walked past a cemetery. Creepy!

Why don't you paint your lions a lion color. You know, sort of dusky tan - then they won't stick out so much and will be the same color scheme as the bricks, dirt, sidewalk, tree trunks...unless you like the house marker aspect of them in black.

I'm so glad you didn't sledge the lions. It is quirks that distingusih old homes from new. Old homes have been lived in before. Other people have have called your steps, THEIR steps. And hopefully, someday when you decide, still other people will call them theirs.

You can get rid of the lions when and if you feel like it because you've given them their due now. But think they are cool. I wouldn't go out to look for them and then buy them but I like 'em where they are.

Kim, the first time you showed them I immediately thought of the lions in front of the Art Institute of Chicago - in a different size and pose, maybe, but still fun and distinctive. You've made your entrance so different that they no longer look like a cliche - more of a statement!

Kim: Thanks for the visit and comments at Ellis Hollow today. Good to know someone else likes plants that look good dead. Will hopefully get a chance to surf your site soon. Craig

Thanks, Tracy and Claire! Claire, I'll keep you in mind... *grin*

Stuart, that's what I figure: That one day I will drive back past the old place and still see the lions prowling. They will probably survive a new owner better than my gardens will!

Colleen... if I ever get so far gone as to name them, I will welcome the intervention. lol.

UKBob, thanks for stopping by. :)

Pam, I'm so glad that you all seem to be amused by my savannah, too. I had visions of people reading my post and thinking, "Oh, wow... she's gone off the deep end now!" lol.

Helpmate, I should do a whole post on how much I hate that retaining wall block! I'm trying to use but hide as much of it as I can...

Ki, I actually thought about that--well, I had thought about just taking off the black paint and leaving them cement-colored, but that didn't sound very appealing. A dusky tan... or tannish brick... just might work, though. Thanks!

Clerk, thanks for stopping by! I can't wait to see you post about some of the quirks you find in your new house, too. :)

Annie, I love that! I was only there once--for a Monet exhibit back in college--and I was too distracted to remember the lions. Darn it. I'll have to go look for a picture.

Craig, thanks for visiting! I look forward to more blog posts from you, too... hopefully I'll have some good dead plants to show soon. :)

And I thought you were going to end by writing that whatever it takes, when you move, they go with you. Let us know when you've named them, because I have a feeling you will, and no intervention from the blogging world is going to stop you!

A neighbor has lions like that, and dresses them up depending on the season. Sunglasses and Elvis capes for The King's birthday, Easter Bunny ears, Santa hats. We love seeing what he comes up with.