For quite a few different reasons, I have been pondering the end of my part-time job at a local garden center. I would miss the additional project money... and yes, I would miss the employee discount... but it may be time to move on to a normal, 1-job life in the not-so-distant future. That got me to thinking about how there are other perks to working at a garden center, and I'm not sure whether other gardeners are aware of them. (Warning: You all might want to go out and get a second, seasonal job after reading this!) 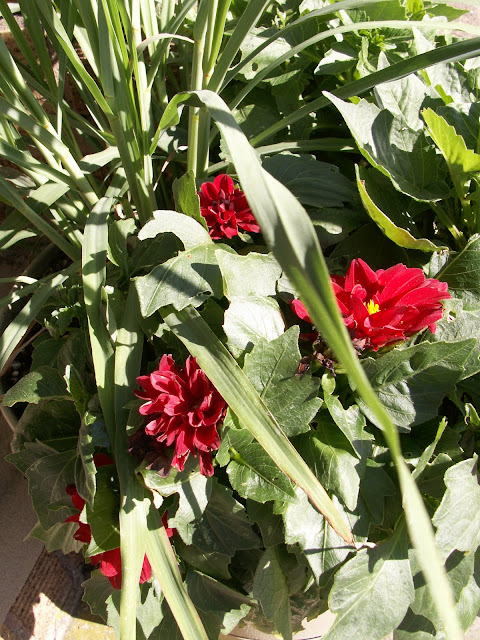 First and foremost, we often get to "rescue" plants... which is code for "taking plants home for free." Sometimes, we do this to see just what a plant will and won't "snap out of" so we know whether it's worth trying to rehab in our "plant hospital" and sell.

Other times we do this as more of a personal challenge. See the dahlias in the photo above? They were throwaways, done blooming and pretty battered from weeks of languishing inside the greenhouse, unpurchased. Weeks (of fresh air, watering, and TLC) later, they have glossy, healthy foliage and new blooms, and are threatening to take over the lemongrass. 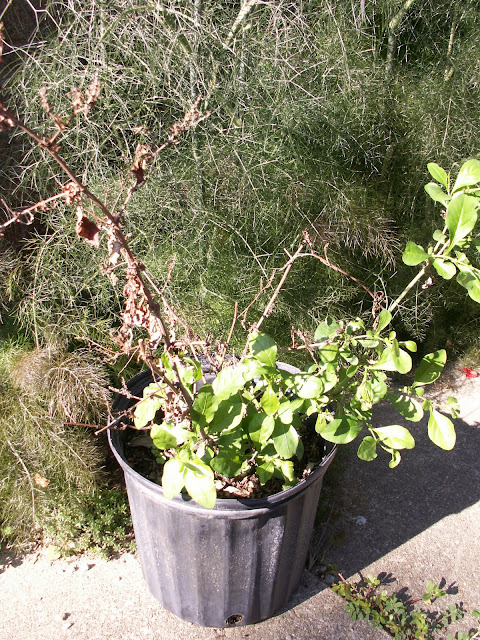 When this pot of blue plumbago came in with a shipment of tropicals, it had just one small green leaf at the base of 4 or 5 long, fried brown stems. It looked worse than Charlie Brown's Christmas tree, and even I questioned my sanity at bringing home such a large pot of dead plant... but I couldn't resist the thought of a free plumbago. Fast forward two weeks, and there's so much new green growth that I almost feel like I should bring it back so the store can sell it! 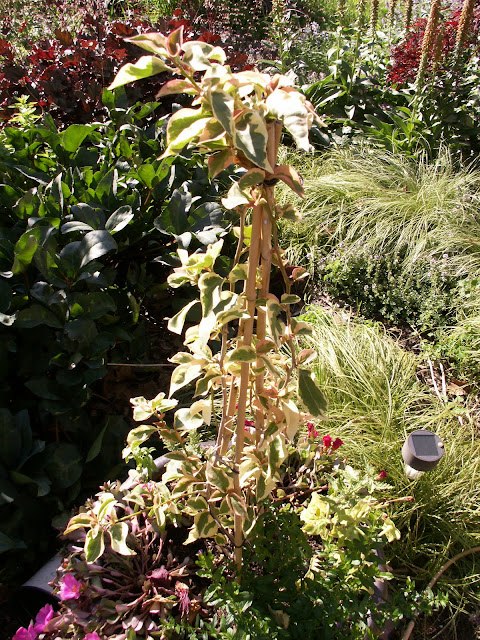 And then there's the plant access.  We find out about all of the sales first (well, depending on which day of the week you happen to be on the schedule) and see what's put into clearance first.  And, yes, we often set aside new or choice plants when they come in. Like the pretty, new-to-me 'Silver Cascade' dusty miller that I picked up this past weekend. Or the only 2 smaller (and thus, cheaper) pots of the variegated 'Bengal Orange' bougainvillea (above) that came in, but went straight to our personal stashes instead of out to the floor. 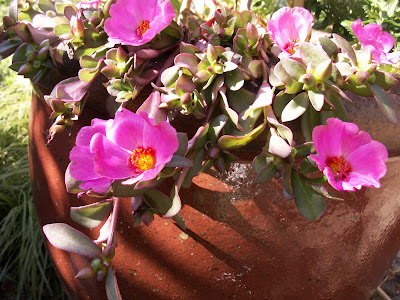 Last, but not least, most decent garden centers will allow you to return or exchange plants in good condition within a short time of your original purchase... but those rules are a little bit more lenient for us. I have exchanged so many half-flats and 4" fancy annual pots over the years that I've lost count. Sometimes because I find that I have too many of one thing and not enough of another... but often, it's just because I see something come in that I like better. For example, I had originally bought two pots of the 'Rose' portulaca that you see above, but I exchanged one a couple of weeks later when I saw the prettier 'Scarlet' (below) make an appearance.  (And no, they didn't make me show my receipt, either!) 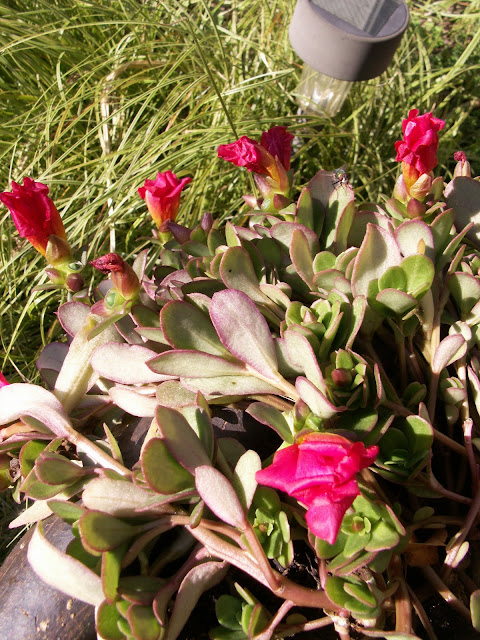 That's probably more than enough dishing for today, so I'll end my little tell-all with this:  Of all of the perks that working part time at a garden center includes... the one I would miss the most is the interaction with other gardeners.  It's FUN for me to meet people like the guy who digs up 8ft palm trees every fall and stores them on sawhorses in his basement, carefully turning them a quarter of a turn every day. (Of course I think he's crazy, but I'm also very glad to know that he exists!)  And I learn useful things, too--I discovered the deliciousness that is sage pesto from a customer, for example.


So there are some secret perks that come with this job--and, yes, there are some pitfalls, too.  But I think that I'll save that list for the next post!  Stay tuned...

As a grower's rep, I am well aware of the rewards and "pitfalls", like you are! Awesome score, the plumbago. We weren't happy with our trop delivery this year. Every single hibiscus was the same reddish/orange color. GRrr.... I am a fool for the annuals. I bring home at least a flat a day!! Yay for the garden center girls!!!

I guess the best way to see how much you would miss it would be to walk away, I would hope you could walk back.

You list of pluses do give pause. I would love to work at a place that has a variety of plants. I already know the drawback. I would come home with plants and OWE them money in the process.

Good luck on your journey, Kim. Fun post. Happy summer :) I miss you!

You have a great perspective to share with your readers. I need to make sure I visit a lot more often. Thanks!